Original Art Sundays, No. 21: The World in Love, last page!

And so it ends, and so it begins. 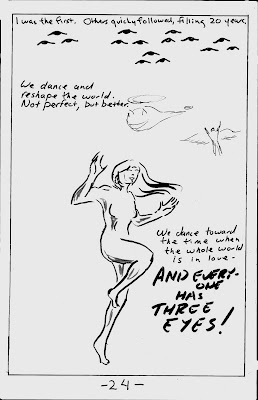 After I finished this, I showed it to some people. I had a sense of what I hoped would be the meaning conveyed, that we can change the world if we see our fears for what they are and open ourselves to new possibilities.  I also wanted to invoke what small knowledge I hold of Hindu teachings, by using the third eye as a symbol for awareness.

So I asked my friend and former student Sean Lynch what he thought it was about. He simply said, "love is stronger than fear."

Can't argue with that.