Starting off the year with inventory, but strangely new.
This is a photo I took in 1991 using 35MM B & W film and printed on Ilford matte paper.
I was driving around with my pal Pauline Johnson, taking shots of folks just out and about. These guys just opened up to me. Very refreshing, considering they followed a woman whose expression indicated she'd maim me if I clicked the shutter.
The title comes from the saying etched in the cross beam behind the bench. 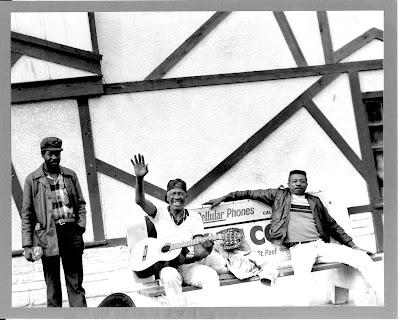 I love the energy and attitude of this shot. The textures of the wood, the wall and the bench are fascinating.
Sadly, the scan washed out a lot of the detail and texture, and no matter what I did, I couldn't get them back!
Sometimes I regret that film is a thing of the past. Digital is here to stay and has its strengths, but each can do something the other can't, and I'm loathe to discard any craft. After all, we still have live theater despite the presence of TV, film, DVD and digital download. Why should so-called "slow art" be any different?
Ah well, the price of progress, I suppose.
Next: I'll have scanner access again this week, so if I meet my writing deadlines, I should get to the next page of A Private Myth by next Sunday.
on January 01, 2012 No comments:

Well, here we are, less than two hours into 2012. I'm about to turn in, but I wanted to get this up as early in the year as I could.
I'll post art later today.
The New Year is an occasion for celebrating recent accomplishments and looking forward. But for me it's always had a bittersweet overtone.
My Father was a New Year's baby, so I'm reminded of him as each year starts. 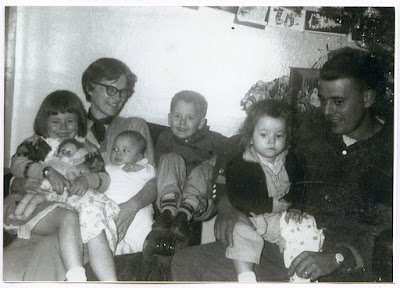 This was taken in 1958, two years before my parents' divorce and the birth of my youngest brother.
I always thought two things about this photo. First, that's the  shortest hair my Mother ever had. Second, my Dad looks terrified.
My Dad divorced my Mother to marry another woman while Mother was pregnant with by brother John.
We didn't hear much from him for ten years after that, and Mother was in complete denial about the divorce, at least to us kids (though my sisters found the divorce papers in the attic, so they knew, but didn't tell the rest of us). So as I grew, he was a blurred memory and a cipher that held a vague promise of return.
When I was 15, I went to live with my Dad and his new family, at their suggestion. I learned a lot about life from them, as I did from my Mother, but I was too scared, selfish and stubborn, and too much a self-styled teenage rebel (translate: I was kinda a jerk), to accept the lessons from any of them until years later.
So it goes. I suspect that's part of the human condition. Dad was fond of the Twain quote- "when I was 18, my father was so stupid. By the time I was 25, I couldn't believe how much smarter the old man had gotten."
Before I finished high school, I had moved into my own apartment- a spectacular disaster that ended with me moving back in with Dad and Audrey briefly 6 weeks after graduation, followed by my hitchhiking up North to live with my Mom and attend junior college for a couple years.
I saw Dad sporadically after that, always wanting his understanding, never quite sure how to get it. When you talk to your parents, it doesn't matter how old you are, you're always a kid.
I came out to my Dad shortly before he was diagnosed with cancer. I was able to see him one final time, and had one last shot at us really understanding one another. This photo was taken during that visit to Atlanta, twenty some years ago. 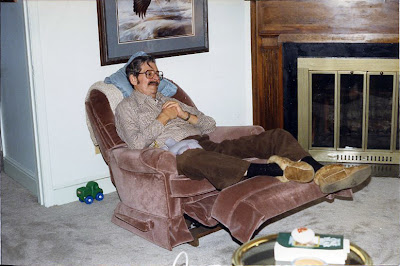 I was stunned at his fragility. I remembered him as being so large and powerful, and near the end, he looked like a breeze would do him in.
We had about an hour to talk while everyone else was out. I think he was as afraid of me as I was of him. We danced around each other, and were just starting to get into some of the really weighty stuff when the rest of the clan returned. So there were some things I never got to ask him. I wanted to push harder, but hey, the man was dying, and I already felt like I was kicking him when he was down just by being out.
However, after Mother died more than a decade later, I was entrusted with her correspondence with Dad leading up to the divorce. Between that and conversations with siblings, I think I've pieced together what I needed to know.
I'll not go into further detail on matters around the divorce. Suffice to say, I've come to terms with both my parents, as we all must sooner or later.
Now, I think about the good things I got from my Dad: a love of laughter and music, a passion for knowledge, some skill as a cook/chef (in addition to having a Master's in Engineering, he ran a catering business on the side), and a fierce sense of loyalty that I can't always live up to.
I also got some bad things from him: difficulty managing money, a bit of conflict-avoidance, and a fondness for a well-turned ankle.
I didn't get his singing voice, which is too bad. He was good.
Now I think of him more with fondness than regret, and as I do with Mother, I see facets of him in myself often, and it always takes me by surprise.
I can live with that.
So happy new year to all, and happy birthday to Charles Robert Bender.
on January 01, 2012 1 comment: