Posting on a Sunday again. That's good. Life remains hectic, but I turned a corner on a couple things in my personal life this week. I won't elaborate here. Suffice to say that some things are more manageable.
When we left our heroine (me) and Sara, I had just spoken my attraction to her.
Read on. 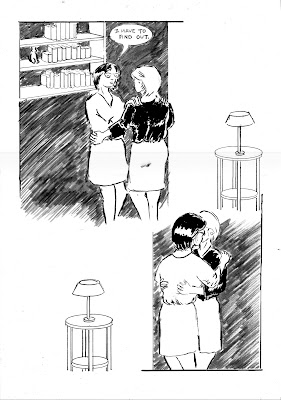 Just the facts, ma'am: That's exactly what she said to me before we kissed.
Sara was not the first trans woman I was interested in, but (not to deride her predecessor), she was the first one that mattered. The previous one was an act of desperation as my marriage was ending and I was feeling unloved and running scared. Was this also desperation as Curt's abuse began to manifest itself? Maybe on some level, but the most important thing to me was my attraction to her. Then and there, nothing else mattered.
To be completely clear, and for the umpteenth time, this is not how Sara looks, nor her proper name.
Technical notes: the inks were fairly cooperative today. When considering the background, I went with angled strokes, a technique I used on a page of A Private Myth years ago. It works to make the figures pop.
The lamp, however, is another story.
The intent was to anchor the setting with an element from the opposite side of the room, 90 degrees off. That way, when you see the lamp on the opposite side, you have a sense of motion and place.
Nice idea, but I don't think it works.
For one thing, while it's technically accurate, the lamp is pretty blah to look at, and adds very little visually. For another thing, it doesn't really communicate space the way I hoped it would. When I was done with it, I thought it was a separate and rather boring drawing that just happened to be on the same board. So I took the lamp out. Here is the result. 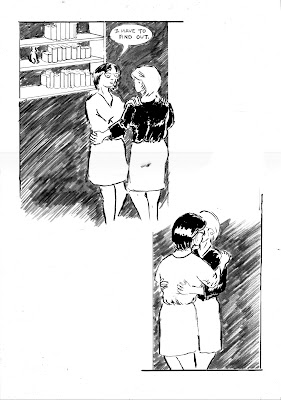 I hope you agree that it's better this way. I continue to work on my environments, but the old axiom remains valid. Sometimes less really is more.
I used one of my favorite devices here, making a complete border by dropping out opposite edges. I like that one. It gives a sense of unity, while still allowing plenty of air.
Materials used on this page:
Canson recycled Bristol board
Ellipse templates, triangle, T-square
Dr. Martin's Hi-CArbon Walnut Ink (continue to love this stuff)
Princeton #4 round synthetic brush (also rapidly becoming a favorite)
Crow quill pen and nib
Faber Castell 20% gray brush marker
Magic Rub eraser
Next: either the next page of this story or the long promised new Tranny Towers piece.
on October 22, 2017 No comments: