Best Comics of 2014, No. 8: Star Trek: City on the Edge of Forever, the Original Teleplay

It's no secret that I enjoy a good Star Trek story, or that I admire the work of Harlan Ellison. As such, even in its bowdlerized version, City on the Edge of Forever stands as one of my favorite episodes of all the series and films (I also really like Theodore Sturgeon's two episodes, Shore Leave and Amok Time, but sadly, he's no longer with us to create graphic versions of them).
I've read the original screenplay in two previous iterations- its inclusion in the Roger Elwood edited anthology Six Science Fiction Plays and as a stand-alone hardcover many years later, courtesy of the Science Fiction Book Club.
So when IDW, who did such a great job publishing the comic adaptation of Ellison's Phoenix Without Ashes a couple years back, announced this project, I was on board for every issue.
While I doubt Mr. Ellison would have suffered such shenanigans, this could have been bad. It could have been howling, rabid bay-at-the-moon bad. It's such an emotionally wrought story, the potential is there to do great injury with this one.
But it worked. 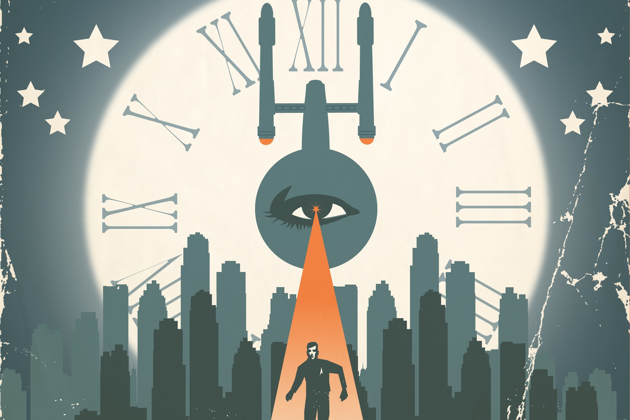 Starting with the brilliant covers, offered in two basic formats- a painted cover or a retro design evoking period Pelican books, Leo &; Diane Dillon, some of Milton Glaser's work, or possibly Robert McKinnis- working through the haunting final page (which I won't reproduce, as you really need to read it for yourself), this is as perfect as comics get.
The script by Scott and David Tipton is taut and empathetic to  all characters, even the irredeemable Beckwith. If you're only familiar with the original broadcast version, suffice to say that this goes into more dangerous territory. The aforementioned Beckwith is a dealer in intergalactic contraband, including the narcotic dream jewels (sidebar: this was not much of an issue when Ellison first penned the tale in 1967, but I am SO tired of writers feeling the compulsion to reinvent the everyday just because it's in outer space, or in the future. So many intergalactic drugs, ranging from Star Wars' Death Sticks to Ketracel-white in Deep Space 9 and Spice in Dune. Now, some of these, like Spice in Dune, are integral to the plot, but others are just mildly annoying. Why not just use any of the vast pharmacy of extant pharmaceutical killers? I'm sure heroin will still exist in a couple centuries, since it's been used on Earth in its current form since 1874, and the opium poppy was first harvested in roughly 300 BC.). His foul deeds lead to the non-existence of the Federation and the Enterprise's replacement with the Condor, seemingly a pirate ship (when I first read this part in the original script, I flashed on the later episode Mirror, Mirror, written by Jerome Bixby).
Kirk and Spock must go back in time to undo the damage done by Beckwith. But in order to do so, Kirk must sacrifice the love of his life.
The best moments here involve a different sort of Spock, one with a greater intensity and, dare I say it, a greater empathy than often shown in the first series.

It would be a crime to overlook the brilliant painted art by J.K. Woodward. I enjoyed his work on Peter David's Fallen Angel series a great deal. He's able to remain faithful to the script while innovating, which shows up well in this series. I particularly like his designs for the Guardians of Forever.

And that last page just makes me ache.
With Mr. Ellison starting to show his years (he had a stroke earlier in 2014), I feared we would hear less from him. But between his collaborations with IDW (including a hardcover collection of this series coming soon) and his self-publishing imprint, I am relieved that his body of work continues to expand rather than contract.
Next: Best of 2014, no. 7 takes us back to the War to End All Wars.