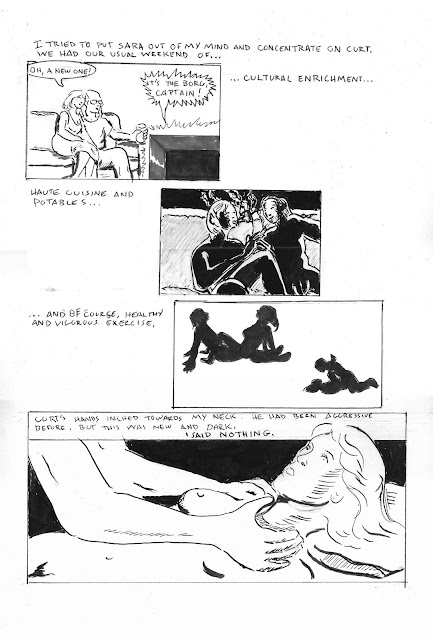 Here are some technical and narrative considerations.
The page is working well, for the most part. The captions describing our shallow debaucheries are fun.
There are a lot of things here I like visually. The panel progression, leading the reader to the banner panel at the bottom of the page, is an engaging layout.
The darks in the first panel could be a bit stronger, but it's acceptable. I like the way the cozy cuddle between us came out. We did share a fascination with Star Trek (and with Frank Zappa, but he liked the potty humor more, and I liked the experimental music).
The second panel: not sure about this one. The lights and darks are working well. But it's not as clear as I might like what we're really doing. The joint is buried in the dark shadows of the hands. I don't think the viewer can tell we're smoking demon hemp. I think I'll try another version of that panel and cut it in later, probably a close-up two shot with the joint featured more prominently.
Looking back on that night, it's astounding that neither of us were injured by passing something burning between us when we were both nude and stoned. Dumb luck, I guess.
Panel three was a different sort of challenge. Despite my proselytizing for freedoms, I'm a bit of a prude at times, usually odd and unexpected times. While I've known it was on the horizon for a while, the idea of drawing myself having sex turned out to be a bit more daunting than expected. I've drawn my characters, including characters that are obvious stand-ins for me like Athena in Tranny Towers, behaving sexually before. But this is No Excuses time. If you're telling your story, don't leave out anything important. This was not our first time by any stretch, and the story of the first time will be told (briefly) towards the end of the book. For now, just let it be said that we had a powerful sex life. Sometimes that's all we had. Drawing sex is challenging. I think the silhouette is a good option in this case.
The last panel was also a daunting emotional outing. While it was not the only time he choked me while in the (for lack of a better term) throes of passion, it was a shock the first time out. I tried to draw his expression at the time, a combination of passion, ecstasy and rage, but I couldn't get it quite right, so I opted for my reaction instead.
I'll let the reader judge the success of the outcome on that one. I think it works, at least aesthetically.
Thought on structure: the part of the story related to Delia has to come after this, since that's the order in which it happens. There's an allusion to Curt's penchant for choking me in that episode as well, which is why it comes to mind here.
Materials used on this page:
Canson Recycled Bristol
Lead holder
Solid Lead #4B
Magic Rub eraser
Crow Quill and nibs
#4 Richeson synthetic brush
Tight Spot correction brush
Dr. Martin's Black Star Walnut Ink
FW Acrylic White
Micron Markers #3, 4, 6 and 8
Faber Castell Brush Markers
Really, when it comes down to it, that's one of the keys to doing this book. Like any memoir, it's as much about the creator understanding herself as it is about offering something to the reader. I see the pieces of this life in the order in which they happened, but their cumulative impact is non-linear, and the graphic memoir is an attempt to understand how the pieces fit together.
Good or bad or both, these are the events that shaped me, and through me, shaped the people I loved, hated and irritated. Somehow I suspect there are more in the last group than there are in the other two.
Next: more Curt, ideally. I really need to finish this chapter, since it's so emotionally draining. But it shapes so much of what comes later, I don't want to give it short shrift.
on April 21, 2018 No comments: