With just an hour an a half left to 2010, I think I'm on safe ground beginning my best of the year posts now.
I know many of my readers may be out reveling, but I never got into New Year's that way very much. So more power to you. Party on. I'll write. Nice glass of wine, relaxed cats, a fire, and writing about comics. That's a good celebration!
I'll do two weeks' worth of bests. No less arbitrary a number than ten, and there was some good stuff this year.
First up, the final issue of Brian K. Vaughan's Ex Machina. 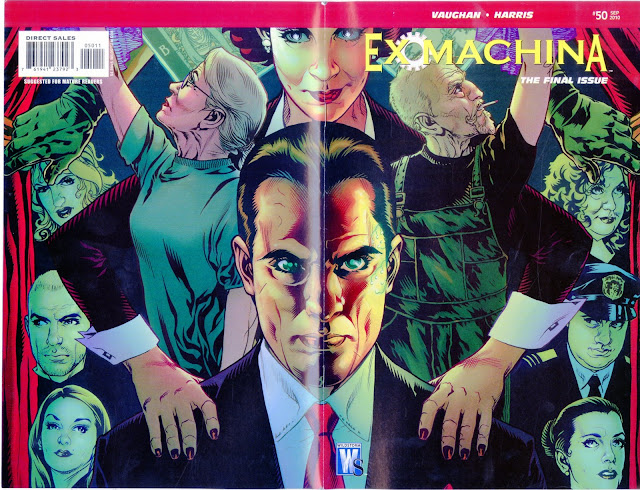 The writing remained taut to the end, and the art maintained its effective combination of photo-realism and ornate decorative elements.
But I was let down by the ending.
When you have a superhero who's a politician, both roles carry expectations on the part of the constituents. I had a preconceived notion of who Mitchell Hundred was, and the character presented in the denouement did not reflect that preconception, quite specifically, did not reflect MY preconception. I don't know if that's a failing in the writing or in the reading, but it did leave me rather nonplussed. I saw him as a pragmatic idealist, and the latter sort of- eroded.
I'd like to be more specific about the big thing that left me with this sense, but I don't want to give too much away. It's still a book well worth reading, and we're about to enter spoiler territory anyway.
You've been warned. Spoilers in your immediate future.
Here we go....
As Mitchell Hundred ascends the political ladder, the two people closest to him are consumed by that ascension.
First, his friend Bradbury resurfaces. After declaring his love for Mitch, he wanders into oblivion.
Now, this plays into the subplot about Hundred's sexuality, which was never resolved directly in the storyline, though we were given ample plot points indicating he was gay. That makes his shocked response to Bradbury's declaration tough to cipher. Is he jarred by the prospect of loving a friend, or is he really not gay? In either case, his less than noble response to Bradbury says it all- he'll sacrifice the friendship for ambition if he must.
Then Mitchell encounters his friend, mentor and oftimes adversary, Kremlin, who had a very different vision of how Hundred should best use his miraculous curse of conversing with machines. 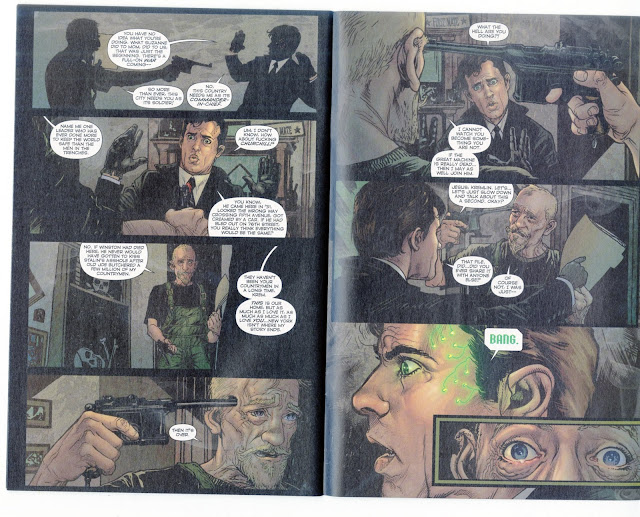 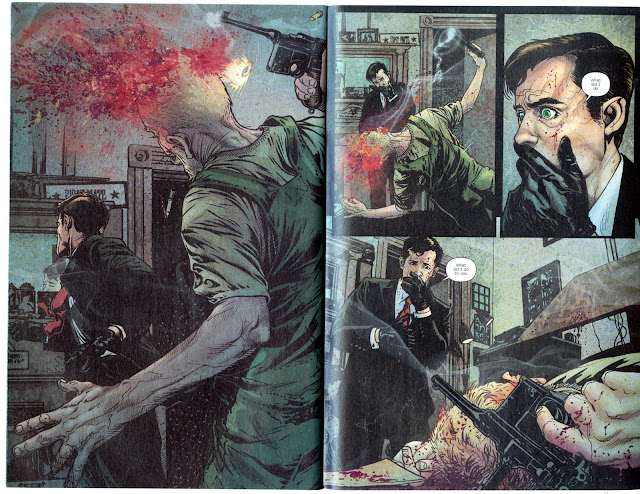 I can't decide if this is as simple as power corrupts, or if this is the inevitable path of political ambition, or simply the culmination of these two people being who they are in relation to one another. In any event, it has a moral ambiguity that left me feeling, well, disappointed.
Now understand. I'm not one of those people who has to have chipper stories all the time. Far from it. But I was left with a sense of uncertainty. A book that offered shining possibility turns out to be a tragedy.
Hundred becomes UN Ambassador and declares that the fallen tower (only one fell due to his intervention- how's that for heroism?) will be rebuilt exactly as it was.
We are privy to this intimate moment of remorse.

Brings to mind the moment in Unbreakable when Elijah says "real life doesn't fit into little boxes that are drawn for it."

His political path takes him in other directions as well.
Again, I won't reveal the ultimate spoiler, though others have done so online. Suffice to say that the issue's title, VICE, has more than one meaning.
I still recommend the whole series wholeheartedly. But I feel about Mitch Hundred much like I felt about the main character in Samuel Delaney's TRITON: after going through all that, I so wanted them to have happy endings.
Jan. 2: Best Comic of 2010, no. 13.
on December 31, 2010 No comments: