Huh, I always thought it was Jughead...

Okay, he's dapper in a casual way, in good trim (as is most of the Archie gang) and, as he is the only one in the series who's acknowledged to be gay, will probably be boyfriend-less for a while.
A couple thoughts:
1. Interesting that the first "community" character is a gay man and not a lesbian (can't confuse the readers with the B or T of GLBT, either, of course!). This just reinforces the man-chasing dynamic built into the Archie books.
2. Despite its limitations, I'm glad it's happening. People need to see that gays are not a threat, and if this can aid in that effort, I'm all for it.
3. I'm sure this is being done in part to help sagging sales. I think the wedding event did fairly well, though not so well as they hoped, and when sales didn't remain elevated, another "event" was in order.
4. Other gay inferences related to Archie:
The National Lampoon metafiction "Junkhead" dealt with the possible futures of the Riverdale gang. Reggie was shown as opportunistically bisexual, sleeping with whoever was available that would give him some short term advantage.
Also, I can't believe this video isn't posted anywhere, but there's the scene from Chasing Amy in which a gay relationship between Archie and Jughead is postulated in a disturbingly plausible way! 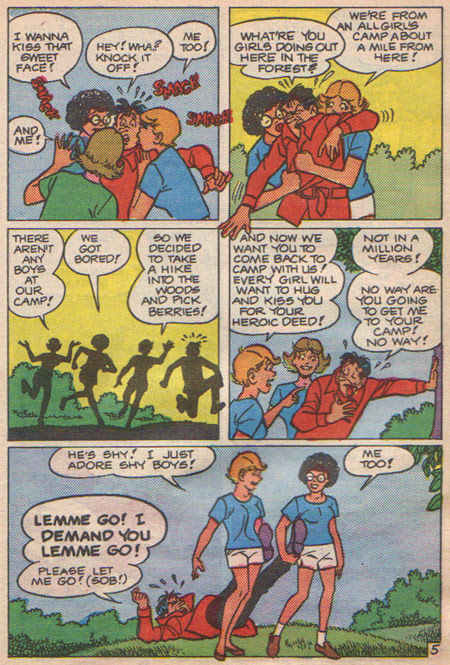