Posting again to atone for my sins in neglecting to do so for so long!
Just finished another of those quick pages! As you may or may not recall, these are designed to do a few things:
To those ends, this snippet goes before the chapter titled The Second Sharp Invitation, previously posted. Since that chapter opens with a talk with my sister Theresa (who prefers to be called Terry now), that seems a good place for this one. Also, it's nice to have a page that isn't about trans issues. They're important and the focus of the book, but that's not all there is to my (or any) life.
And now, another great childhood moment! 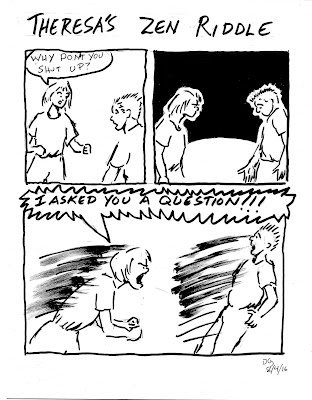 I've had this one in the back of my head for a while. I left out the following bit when we both broke out laughing right after she said that!
This is the third of these comic interlude pages. I don't think I'll do one for every chapter - that would be tedious- but where necessary, they'll show up.
I'm alternating between working on the scripted roughs for Daddy's Song and working up more finals for the Curt chapter. Since she's coming to visit this weekend, I'd like to get a start on scripted roughs for the chapter on Jenny soon too.
Next: some of the above...
on August 04, 2016 No comments: