Wow, what a rough couple months! Working two FT jobs and preparing to move!
I have a little time to breathe now. No comic work to speak of to post (about 10 or so pages in the rough stage, too crude for public consumption). I'm working on a large work, ideally to be funded by the Faculty Support Grant at the art college where I continue to teach as an adjunct.
Meanwhile, I've been working on binds- preparing some comic books to be sent out to be turned into hardcover books. The end result can be quite satisfying. I've been designing some Tables of Contents to go along with the books, and I'd like to offer some now. 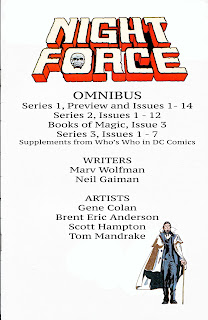 Night Force is a book I've been wanting to collect for some time now. Very smart horror title, it had its third incarnation a couple years ago, but the original run by Marv Wolfman and Gene Colan will never be eclipsed. Since the logo has that big blocky style, I opted to keep the text centered and use only a small support illustration. There will be a full page B & W illustration facing the title page.
When planning these, it's important to allow for trim. Most comic binds are trimmed by the binder (at the option of the person placing the order, of course!), which means one can lose any text or image that crowds the border. I have a clean printout of this, and I'm reasonably certain I've given it enough air.
The central character, Baron Winters, made a couple small appearances in other titles, but since this book is already 35 issues thick (about 10 over standard), I decided to omit them. Is it cheating to call it an Omnibus then? Perhaps so, but it's my book! 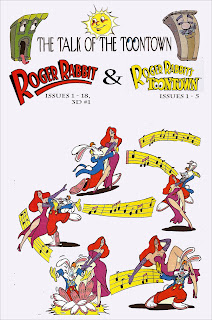 The Roger Rabbit Table of Contents was just fun! Here, the image was more important than the credits, so I opted for simple listing of the titles involved. Again, there were editorial decisions as to what got included. I could have scanned and reprinted the graphic novels Return of Doom and Tummy Trouble at comic book size, along with the handful of Roger Rabbit stories that ran in Disney Adventure Digest, but it seemed counterproductive. I went with what we call a "straight bind" of just the two primary titles. Taking the masthead from the letters pages in the main title, and the dancing image from one of the stories, the layout suggested itself easily. 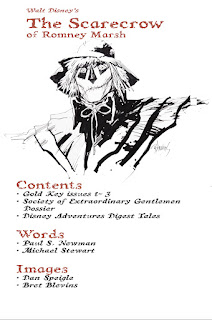 This is a book I've been working on for years. It won't be a particularly thick book, only about 4 or 5 issues worth of material, but it's a very important book to me. The Scarecrow of
Romney Marsh has fascinated me ever since I first saw him on Disney's Sunday night show (which aired the same day the Beatles first appeared on Ed Sullivan!). I stumbled on the Blevins comics in Disney Adventure Digest, took about three years to find them all, and through a friend who attended a con where Blevins was appearing, commissioned a Scarecrow piece, which is used here as the primary illustration.
This will be a gilt-edged book with custom art on the cover. It will be housed in a shadow box, which will also contain a DVD case, which will hold the Disney Scarecrow films, the Hammer film Night Creatures (another take on the character) and a CD of music from the TV episodes. I have this one about 2/3 of the way ready to bind.
My mad plan is to send a bunch of these out in the next couple weeks, so the finished binds arrive at my new place, making one less box to pack. I currently have 12 books I'm almost ready to send out, including Night Force and Roger Rabbit. The ideal is that one replaces a library of difficult to file and manage floppies with a handsome library of bound editions!
Next: sketchbook work or finished pages...
on October 19, 2015 No comments: