The 1990s were a heyday of new titles. Between the zine explosion and new publishers not only trying, but getting distribution of, new and innovative titles, some great work came out of that era. One of the most ambitious of these publishers, Sirius, gave us titles as wildly divergent as Dawn, Dogwitch, Poison Elves, and the delightful Akiko on the Planet Smoo.
While creator Mark Crilley moved on to other projects after more than 50 issues of Akiko, his work remained fresh and innovative. I didn't keep with his post-Akiko work, but did note in passing that he had begun to produce How to Draw... volumes, mostly on manga.
When I happened on The Drawing Lesson in a search of recent public library volumes, I was intrigued but skeptical. I've seen numerous volumes on the subject, some of which, like the Christoper Hart books, are simply awful. But given that it was Crilley, I vowed to give it a chance. 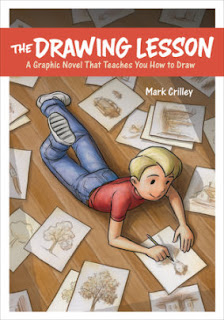 The book describes itself as "a graphic novel that teaches you how to draw." Usually such books have a thin plot that serves as a framing device for lessons. A classic example that works fairly well is David Chelsea's volume on comic book perspective drawing. This book also employs a such a device, but it's a bit meatier than most.
In The Drawing Lesson, Crilley tells of David, a young boy who wants to draw, but is reluctant to do the work of mastering the basics to get there. As a teacher and as a student, believe me, I've been there. Following a chance encounter with a woman named Becky, he begins to pester her until she agrees to give him his devoirs in drawing.
In her review of this book, Joanna Draper Carlson points out the myopic male privilege young David exercises in his demands on Becky. I agree to a point. He is demanding of her time and energy, and resistant to her teachings, but I saw that more as a function of youth than of sexism (though the latter is also a clearly valid point). Also, Becky is not shy about sticking up for herself, and understands what it means to be so young and so eager to get somewhere that you forget to take the whole trip!
This is the real strength of the book. Yes, the lessons are solid and work well. But Crilley never loses sight of his characters. They become plausible and empathetic very quickly. The story twines about both David's growth as an artist and his fledgling friendship with Becky, also touching rather elegantly on the special bond between teacher and student, a bond different than any other I've experienced in life- deep and profound, but always at a necessary distance, and often transitory by necessity.
The lessons are not perfect. For instance, in the above spread, Crilley overlooks the cast light halo that often appears at the base of an object's cast shadow. But he's quick to point out that everything is not contained in David's lessons, which serve only as a foothold for fundamental skills and for the confidence to grow as an artist.

Crilley recognizes the place of art in life, while also observing life with a compassionate eye. This book is an elegant and effective approach to drawing, one I'm adding to my own overcrowded reference shelf on the topic.
Next: No. 12, kids on a search in their animal natures...