Continuing our countdown of 2014's best, I'm padding the count a bit with a double header.
Both these books are takes on the 1960s -1980s superhero model. Often called The Silver Age, this is a period in comics history when writing began to improve, continuity came into play in a larger way, and there was still a spirit of optimism in comics, in tandem with the increased "realism" of early Marvel heroes. My love for this age is not just because these were the comics of my youth, but because they offered a more confident, positive world view.
The first of these, Astro City, is now a Vertigo book. Given that Vertigo was begun as an experimental/horror line, this is mildly amusing. Kurt Busiek and Brent Anderson's Astro City is a place of real superheroes. Begun in the early 1990s, the book has retained both its quality and its popularity over the years. The book deals in fairly common themes- legacy heroes, intergalactic threats, the nature of villainy, possibilities of redemption. There's also a tantalizing back story building in the current arc involving a character named The Broken Man that promises to explode any issue now.
Fans read this book for its in-jokes and references as much as for its superb, exciting stories. A character in issue 15 attends Oksner College, a reference to DC artist Bob Oksner. The character Samaritan is an obvious Superman (or throw in your favorite ubermensch superhero) parallel. It goes on and on, but not knowing all the inside stuff doesn't interfere with enjoyment of the stories. 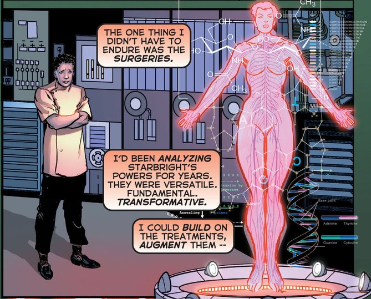 But the strongest aspect of the series is its humanity. Many of the stories concern themselves with the common citizen's relation to super beings. It's sort of a cross between Hitchcock's ordinary man caught in extraordinary circumstances and a Capra-esque everyman sensibility.
Even when the beings are paranormal, there's a sense of human frailty. Issue 17, a story titled "Wish I May", deals with a tormented genius cum mad scientist and his high school protector, who naturally becomes his superhero adversary. In an act of self-sacrifice, the hero Starbright dies, allowing the villain, one Simon Says, to come to terms with being a transgendered woman. After completing the transformation, of course she assumes the mantle of Starbright. It's nice to read a story about a transgendered individual that isn't a farce or a tragedy.
The second half of today's tie is even more traditional. Many wags have dubbed 2014 "the year of the woman" in comics, largely due to the excellent work on DC's Batgirl and Marvel's Captain Marvel and Ms. Marvel books. Those books didn't make this list simply because I haven't read them consistently enough to give a solid opinion. 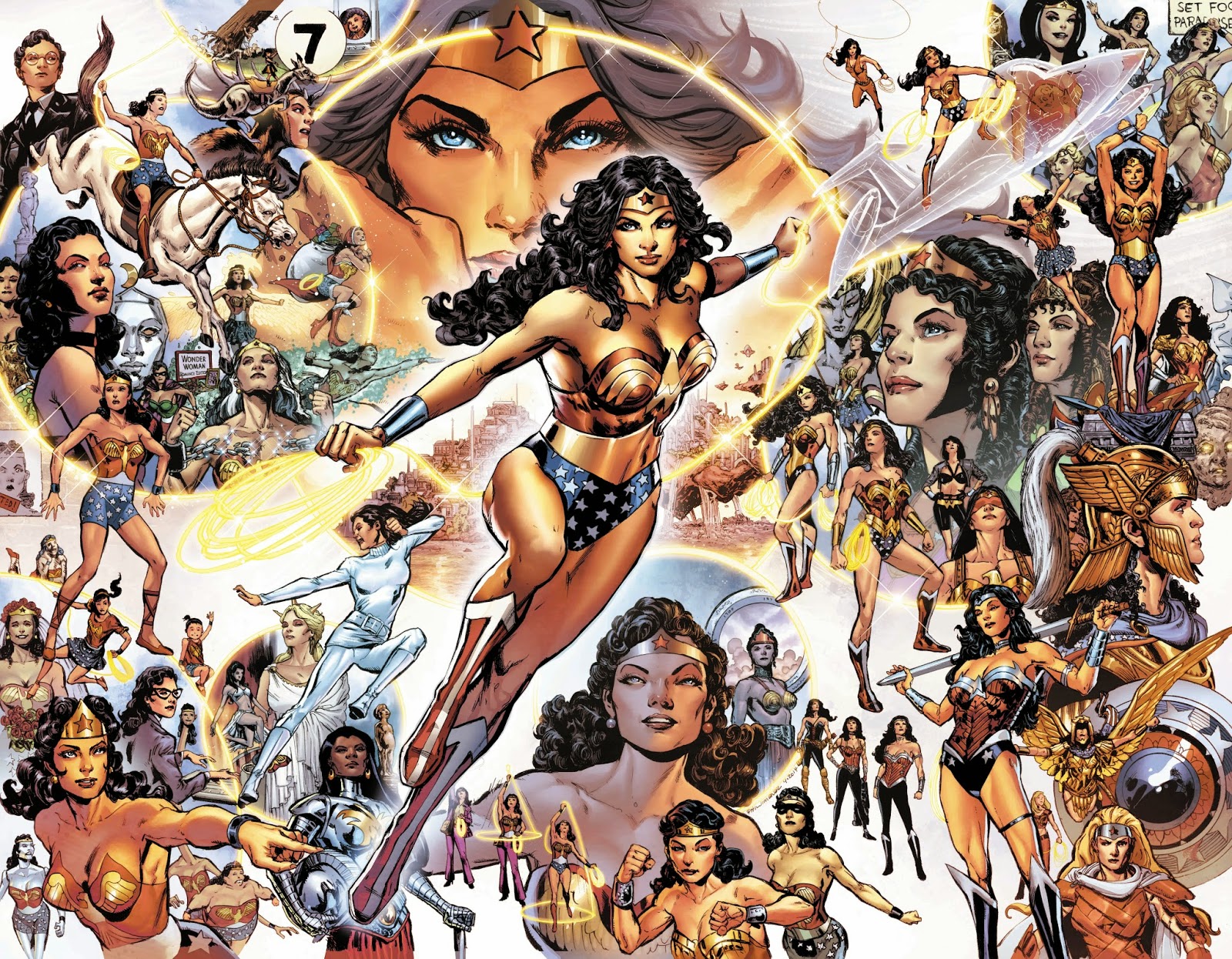 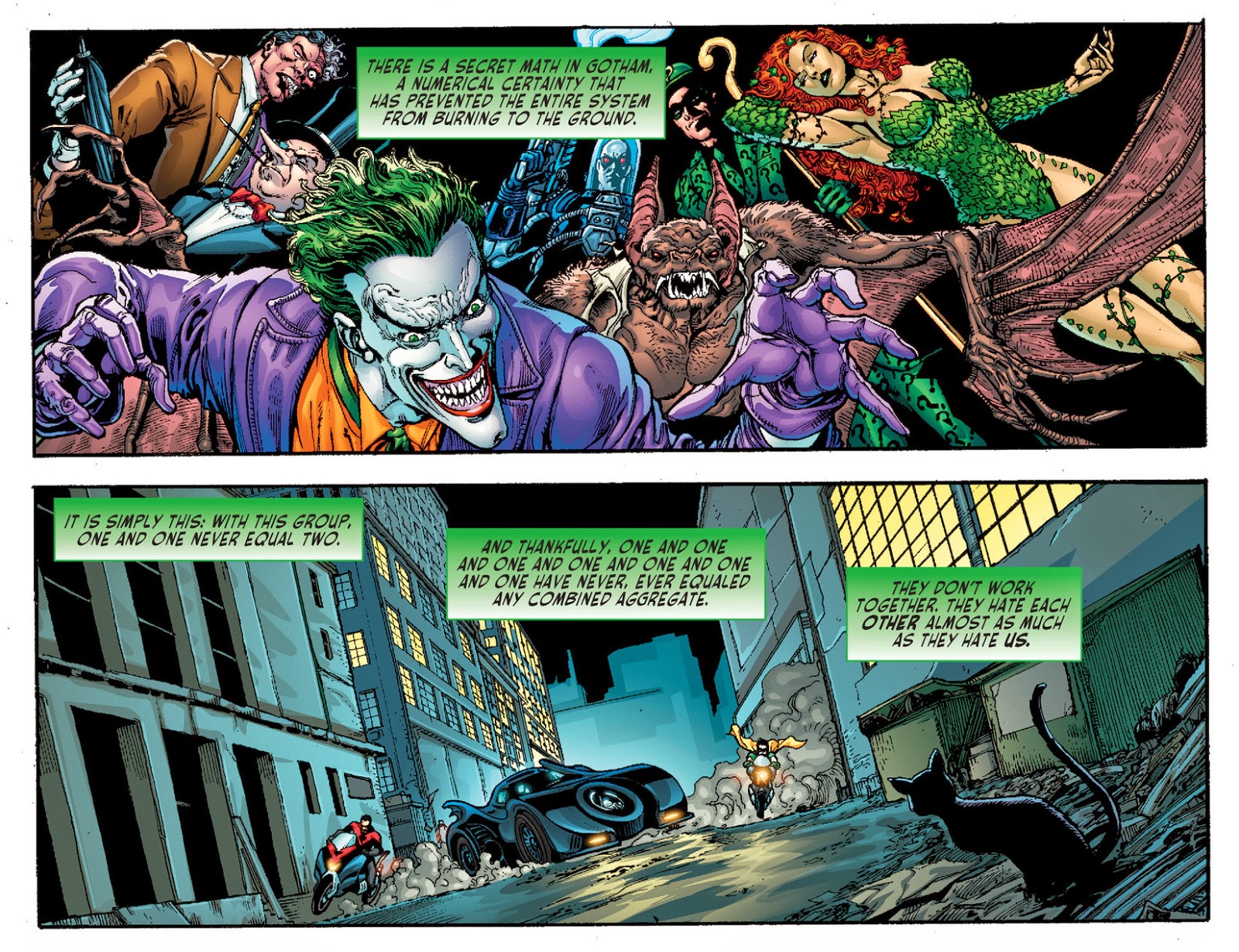 However, in a painful bit of irony, the character that arguably paved the way for all super-powered females, Wonder Woman, has been going through a series of stories that both disappoint and frustrate. The bastard child of Zeus? The Goddess of War? Please.
Despite this, DC has done us all a great service. Available in both online and hard-copy formats, the anthology title Sensation Comics gives us Wonder Woman die-hards hope. I've only been reading the hard copy version, so I'm not sure how one translates into the other. In the floppy version, there are three or four stories per issue, each being a short Wonder Woman tale. In issue 1, there's a nicely done story of Diana taking on Batman's rogue's gallery in Gotham. Issue 2 has a nearly book-length story featuring Dr. Psycho and Cheetah, with strong, graceful art by Marcus Cho. 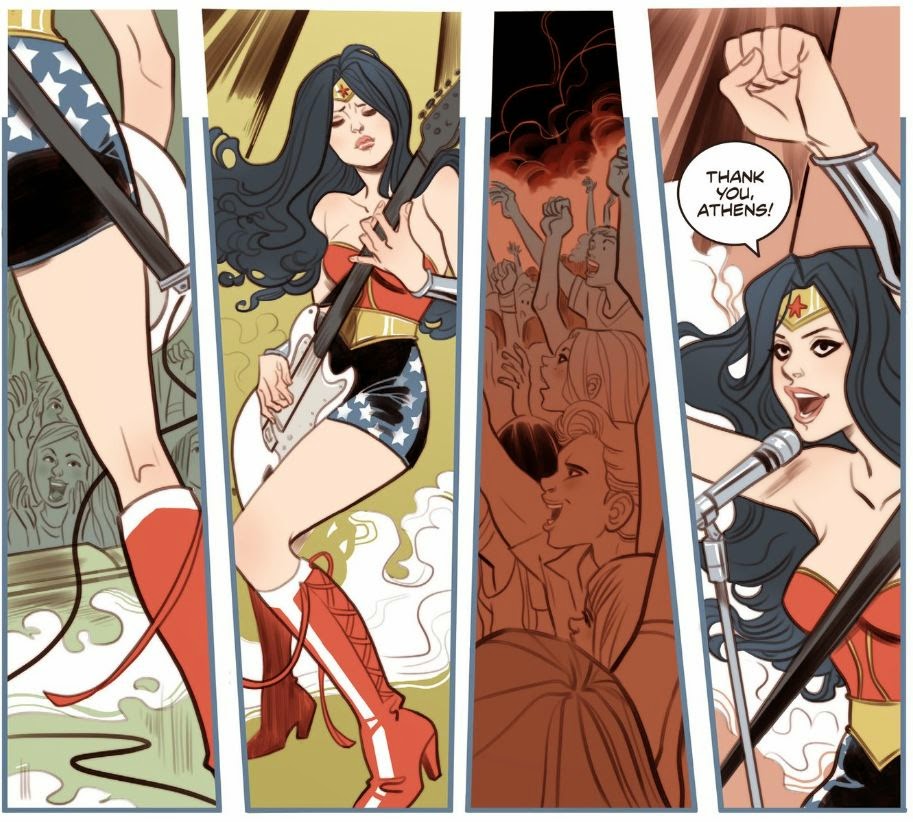 However, the book shines in the lead story of # 3. Beginning with the final number of a concert by Wonder Woman's band Bullets and Bracelets (which is actually a pretty good name for a band), the story takes in a meeting with two young female fans, which is followed by a conflict with an adolescent male bent on proving his own juvenility. The art in this story, by Margeruite Sauvage, is spot on for theme and tone. It should be noted that the creative chores in Sensation Comics seem fairly evenly divided between males and females!
Strangely, the story in #3 and #4 that everyone else seemed to adore, the Gilbert Hernandez story, left me cold. I'm a great admirer of the work of Los Brothers Hernandez, but this one just didn't work for me.
Well, there you have it. At least transitory proof that optimism isn't dead, and that you can tell a smart, exciting story and still not be so Godawful grim about everything!
Tomorrow: Best of No. 12 rocks out!
on January 03, 2015 No comments:

After midnight, so technically this post is late by the arbitrary standard I've set for myself. However, I'll post the next one shortly, to get back on schedule. Not that anyone but me is keeping track, but it's good to have these things on the record.
No. 13 in our hit parade is Ed Brubaker and Sean Phillips' The Fade Out.
I'm on record as a devotee of noir in many forms, from Patricia Highsmith's work to Chandler's novels, and to films as far-ranging as Remember My Name, Blood Simple, The Big Carnival and Who Framed Roger Rabbit? The latter, of course, is actually one of the most cynical films Disney's ever done. In comics, there's been some wonderful noir, ranging from some Eisner Spirit stories to Steranko's Chandler and the conspiracy epic 100 Bullets. I also particularly like the Parker adaptations.
Then there's Brubaker and Phillips, masters of the craft.
I've admired Brubaker's crime comics for some time. I recently got a custom made Sleeper Omnibus from one of my comic binding buddies, and will add a photo to this post when I get home. His superhero work, while strong, doesn't appeal to me as much. Brubaker and Phillips work so symbiotically that the pages seem to pulse!
Brubaker's writing manages to retain the misogyny and hyper-masculinity of noir and still portray all involved as real, sympathetic people, rather than the self-parody that accompanies the worst of noir comics, like Frank Miller's All-Star Batman and Robin. 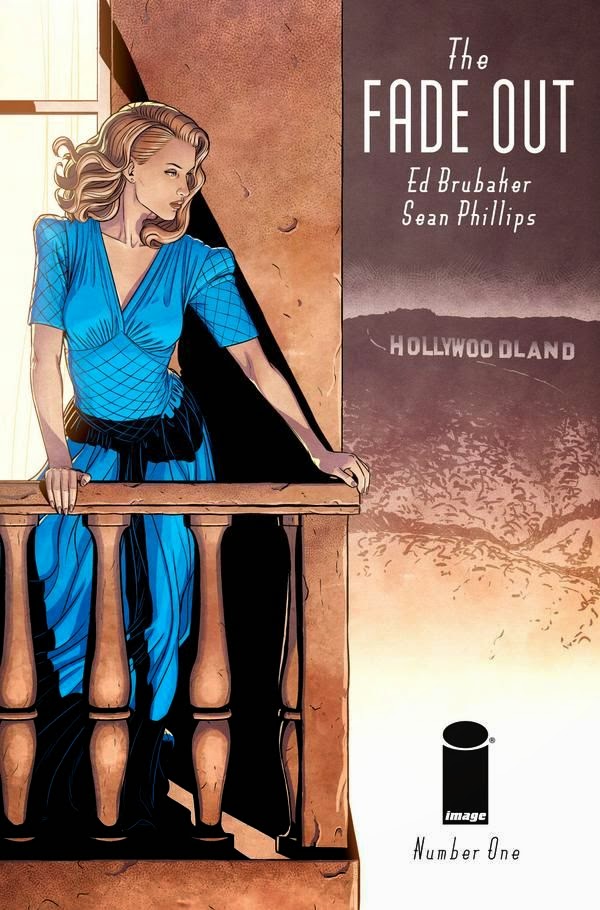 In The Fade Out, we have a classic noir, set in the world of film. How utterly perfect!
The story of a drunken screenwriter and a murdered starlet, this work evokes everything from Spillane to Barton Fink. The players could easily be stock characters-  the studio head, the security goon, the sleazy agent, the actresses vying for the same spot, the bookish and efficient PR girl, the smarmy leading man and the hot-blooded Latino musician- but they rise above the cliches to be more fleshed out. This is a neat trick, since the book is told from the POV of the writer, Charlie Parrish. The reader learns of events as Parrish does. This trick is a bit elusive in issue 2, as the narration is third person, making the POV thing less clear at times. The story is set in 1948, making the Hollywood Ten part of the plot. The scene in book two that mentions this dovetails nicely into Charlie's writer's block and accompanying alcoholism.
The insights into character are more apparent in book 3, especially in the scenes that focus on aspiring actress Maya Silver.
As always, Silver's art is spot on. His backgrounds, very loose when closely scrutinized, have exactly the right amount of details and are always period and location specific.
It's also important to mention Elizabeth Brewster's colors. Her palette is subtle and accurate, as if someone had subdued the tones in a Douglas Sirk film just a tad for atmosphere. The tension is also consistent with a Sirk film, though Sirk characters are usually so bound by convention that they would never let loose the way Brubaker's characters do.
It's unclear whether The Fade Out is an ongoing series or a miniseries. Much as I've enjoyed the first three issues, I'm hoping for miniseries. I don't think there's enough meat on the bones of the scandal ridden studio to plausibly sustain more than one or two story lines. I'd be happy to be wrong, of course, and if anyone can pull it off, it would be this team!
Another factor is worth noting. The series'  film motif is enhanced by articles on film scandals as backups (the Fatty Arbuckle piece in issue 2 is particularly nice), and by fake lobby cards from Victory Street Pictures, the scandal ridden production house of our story, on the back covers. I could pick nits and point out that the height/width ratio of the lobby cards is off from real lobby cards, but it's such a fun touch, I can't get too worked up about it.
Next up: Best Comics of 2014 No. 12, a sensational outing!