Time to explain where the title comes from, part 3.
Ignatz is the mouse of the cat-and-mouse love/hate duet of Krazy and Ignatz in Krazy Kat.
3/4 of a century ago, George Herrimann created an iconic minimalist text in comic strip form that draws on primal aspects of love and fear.
When one first reads Krazy Kat, the usual reaction is "meh". But on extended exposure, one usually agrees with the popular perspective that it's the best comic strip ever done, possibly the best that ever will be done.
By blurring Krazy's gender in the strip, sometimes referring to Krazy as "he" and other times as "she", Herrimann established one of the first gay relationships in comics. This is wildly debated, but does need to be mentioned in passing, so to speak.
Whenever I want to remind myself how much can be done with this art form, I read Krazy Kat and just sit in wordless joy.
on April 25, 2009 2 comments: 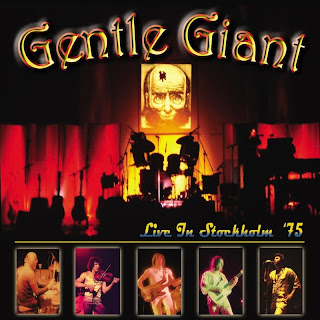 time to explain where the title comes from, Part Two.
Gentle Giant have a new album out, almost 28 years after their breakup and mere days after their partial reunion as Three Friends.


I won't elaborate on Gentle Giant.
Either you're into complex harmonies, challenging compositions, and technical virtuosity or you're not. I am.
on April 25, 2009 No comments: 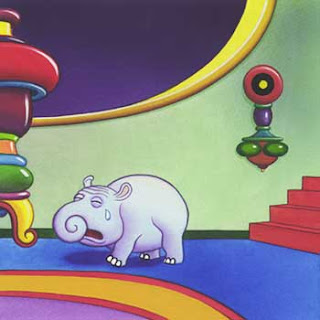 Time to explain where the title comes from, part one.
This is Trosper, the grinning elephant-pig-child of Jim Woodring. Well, not so grinning in this image. Trust me, he has a great grin.
Woodring delights and terrifies with incredible and sublime dream imagery.
Woodring's also a really sweet guy who loves Fleischer Brothers cartoons!
I was lucky enough to meet him in San Diego last year. As soon as I can get at a scanner, I will post the Trosper sketch he did for me!
on April 25, 2009 No comments: 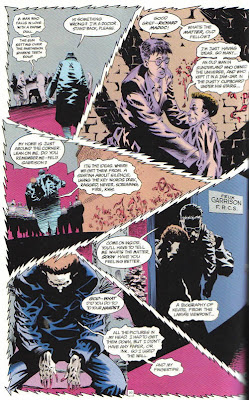 As I read and reread (and reread) the Absolute Sandman, I find myself returning to a handful of stories repeatedly: A Dream of a Thousand Cats, all the Hob Gadling stories, and Calliope.
Calliope is the muse of words, held in the power of a writer to feed him ideas.
The story spoiler comes next, offered as a caution for the six people in the comics/ horror/ SF worlds who have not yet read this story.
When she is rescued by Morpheus, he floods the writer's mind with more ideas than imaginable.
The ideas prove beyond the hapless writer's control.
What strikes me as a bit of a dodge in this story, probably not intentionally on Gaiman's part, is that it's not ideas that are hard. It's execution.
It's easy to mull and wax philosophic about all the wonderful things that are going to happen after your work comes to life: you have shelves of books with your byline, you are celebrated for your innovation and genius, and when you travel to discuss the work and ideas, you don't ahve to pick up the tab. Oh, yeah. Your home is magically bigger and cleaner.
The ideas are crucial, but without execution, they truly are a curse: this is what could be. Make what could be into what is.
Well, I'm off to go into the studio.
But then, I'd have to be!