Been more than a month since I posted! I got a call to contribute a comic story to an anthology for the Side By Side Film Festival in Russia. Given the current political climate there, the idea of being part of a Russian GLBT film festival in any way was too much of an honor to pass up.
I did notice a while ago in the stats that this blog does have some readers in Russia. I hope my work gives them some pleasure.
Now, a few weeks after deadline (but apparently still acceptable to them, since they asked for it again today and they now have it, barring catastrophe), I can share it with you. I'm counting it as 6  posts, since it's 6 pages that took me 5 weeks to do.
I also have the next page of the Surrealist Cowgirls story done.
Here's a piece of my coming out story, titled Get A Job! This work will be included in The Sharp Invitation. The current total for that book is approximately 20 pages, with several more shorts in the planning stage. The book will be a series of titled chapters/shorts, telling the whole story, or as much of it as I think people want to hear. As I was discussing with another teacher at MCAD today, there's a fine line in memoir. You have to tell people enough that they give a rip about what they're reading, but it's a balancing act as to how much of yourself you put out there. The three biggest chapters currently planned are titled Sex, Drugs and Rock & Roll. I sigh with apprehension just writing the chapter titles here!
Now, the new chapter. 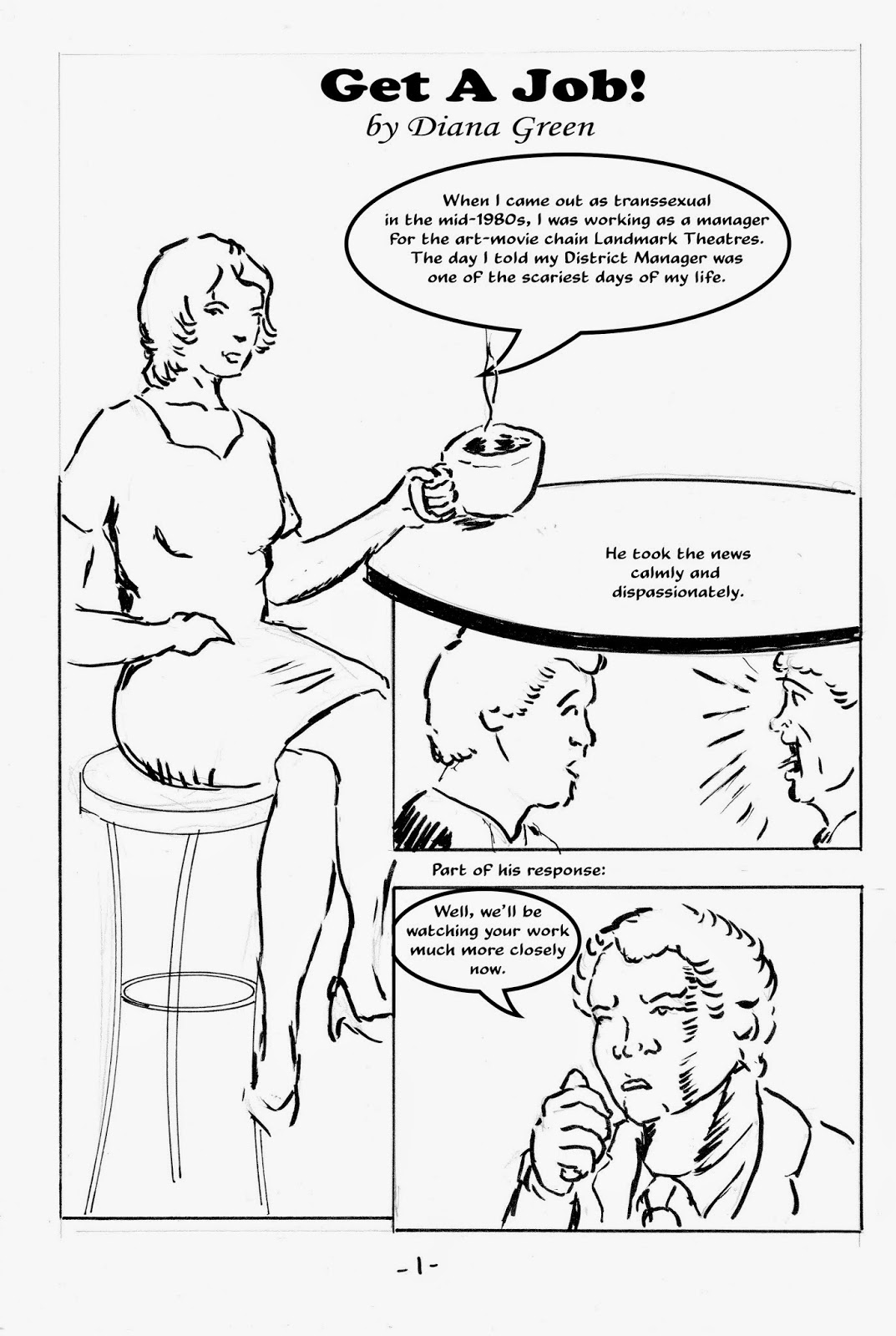 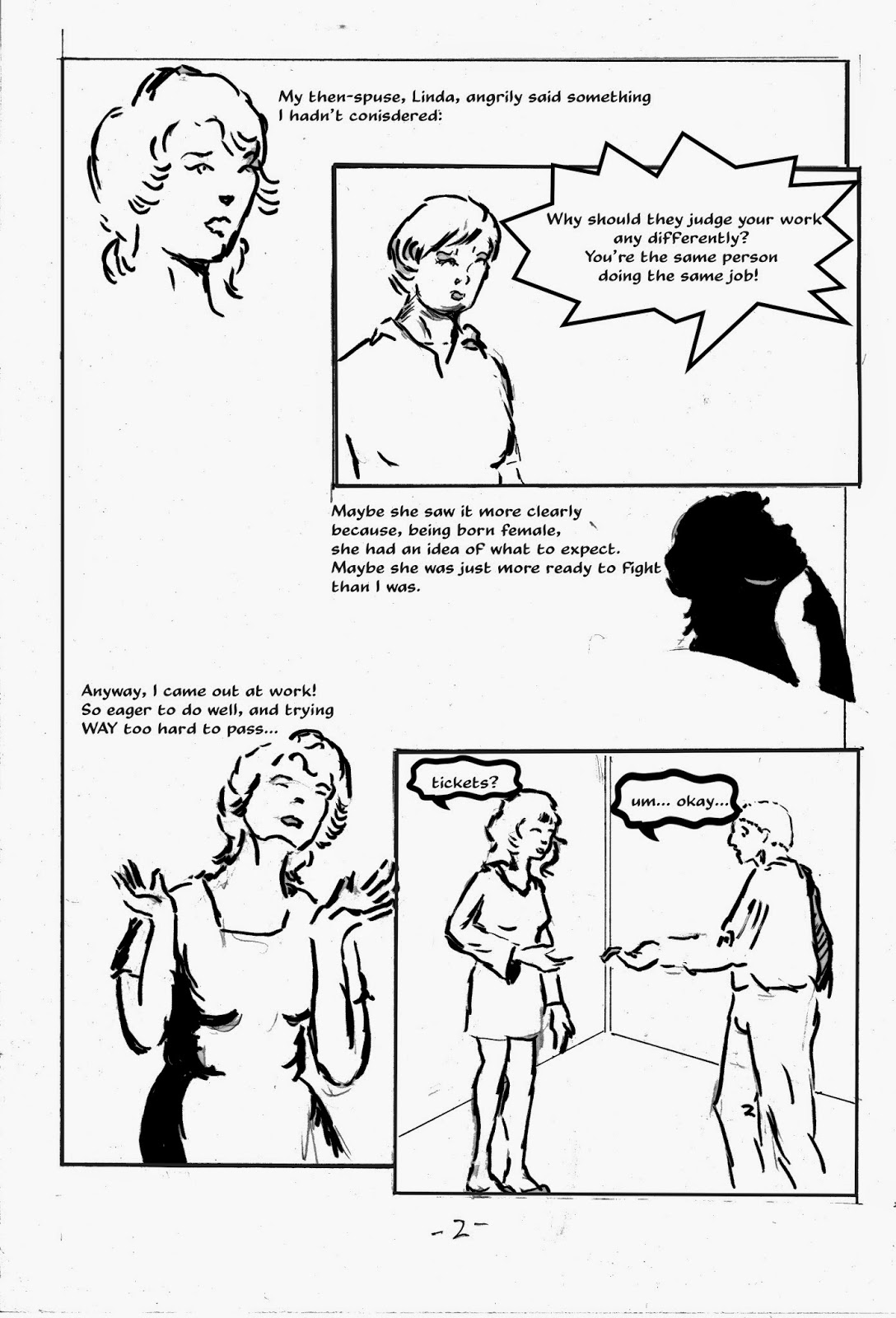 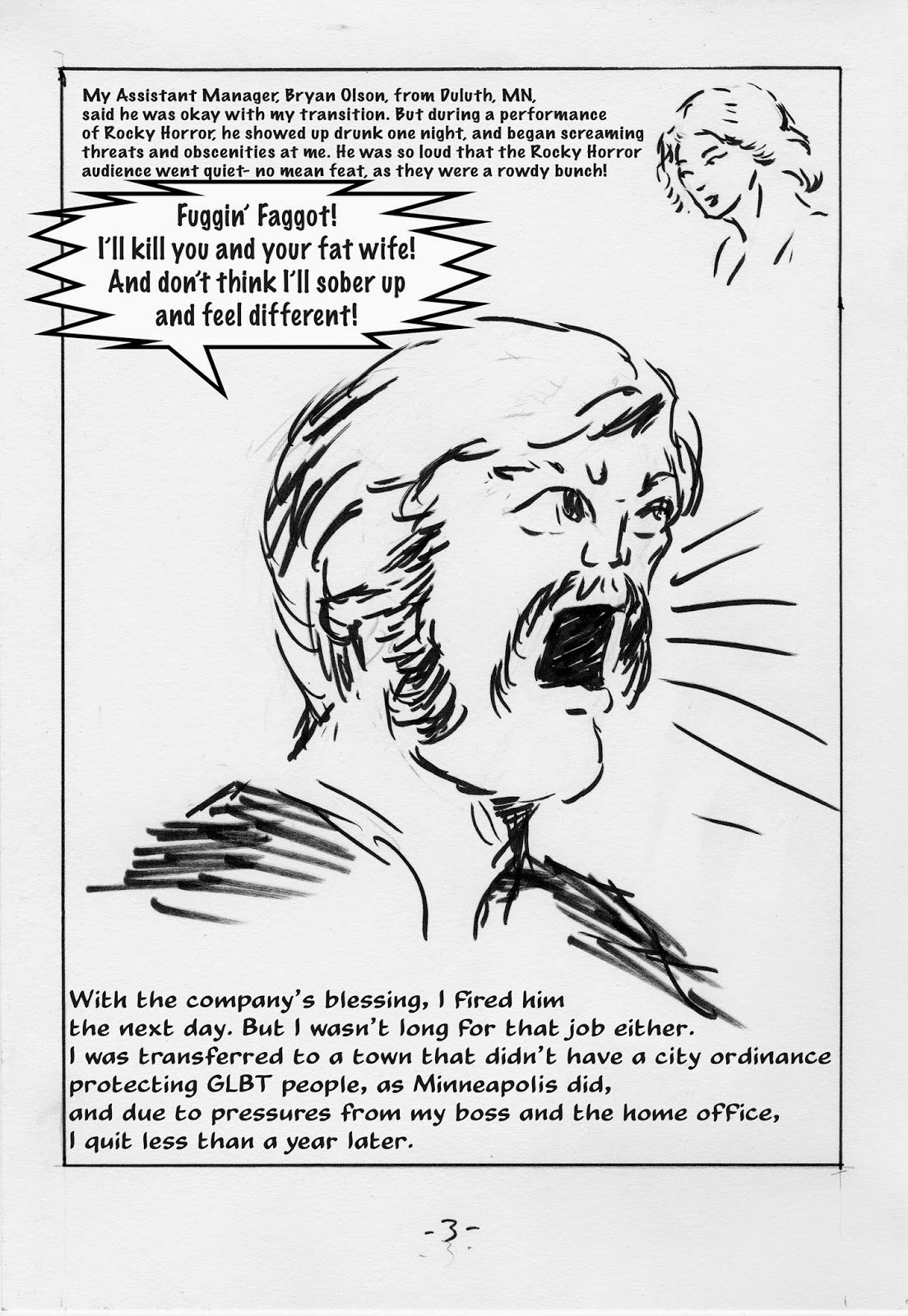 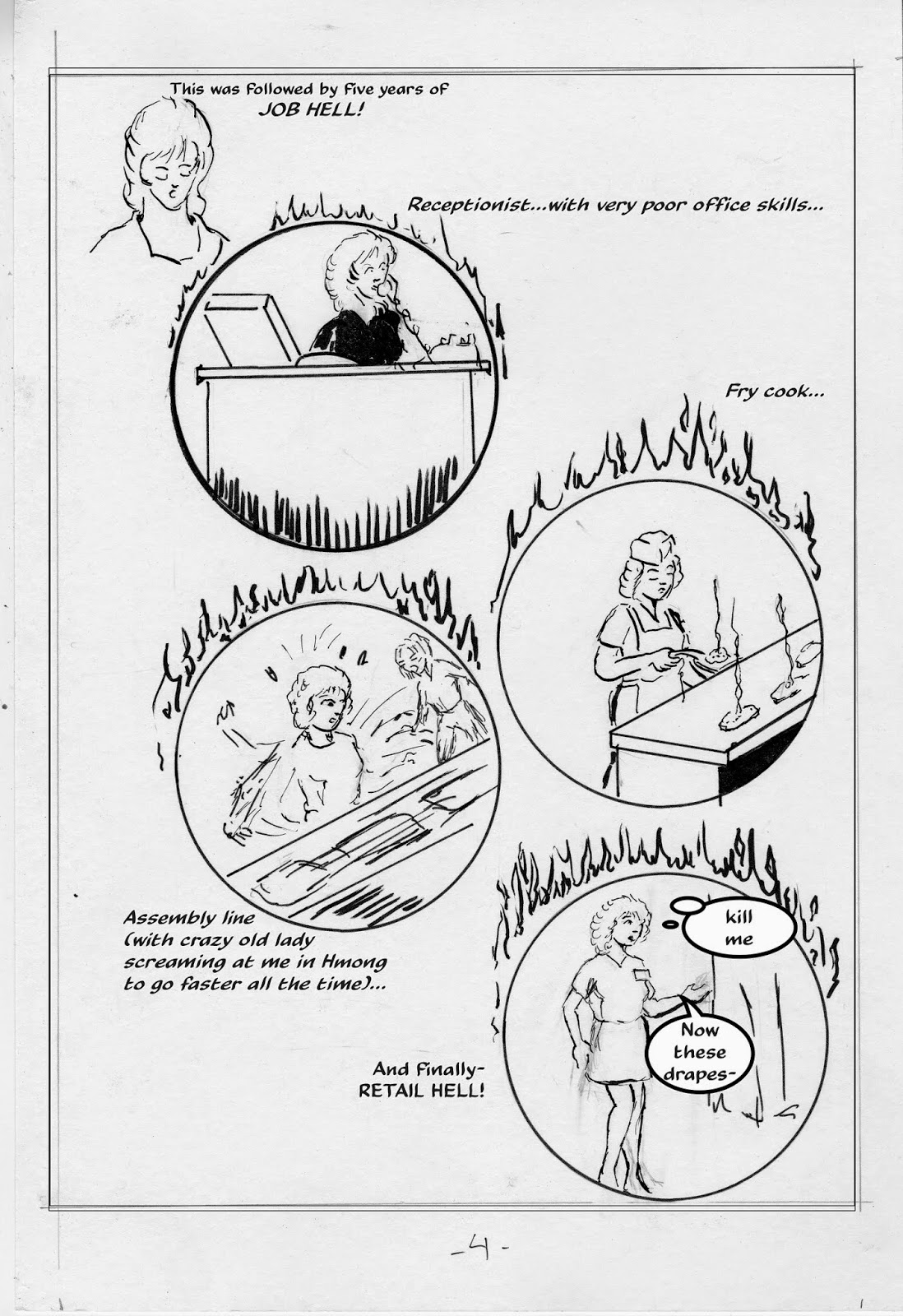 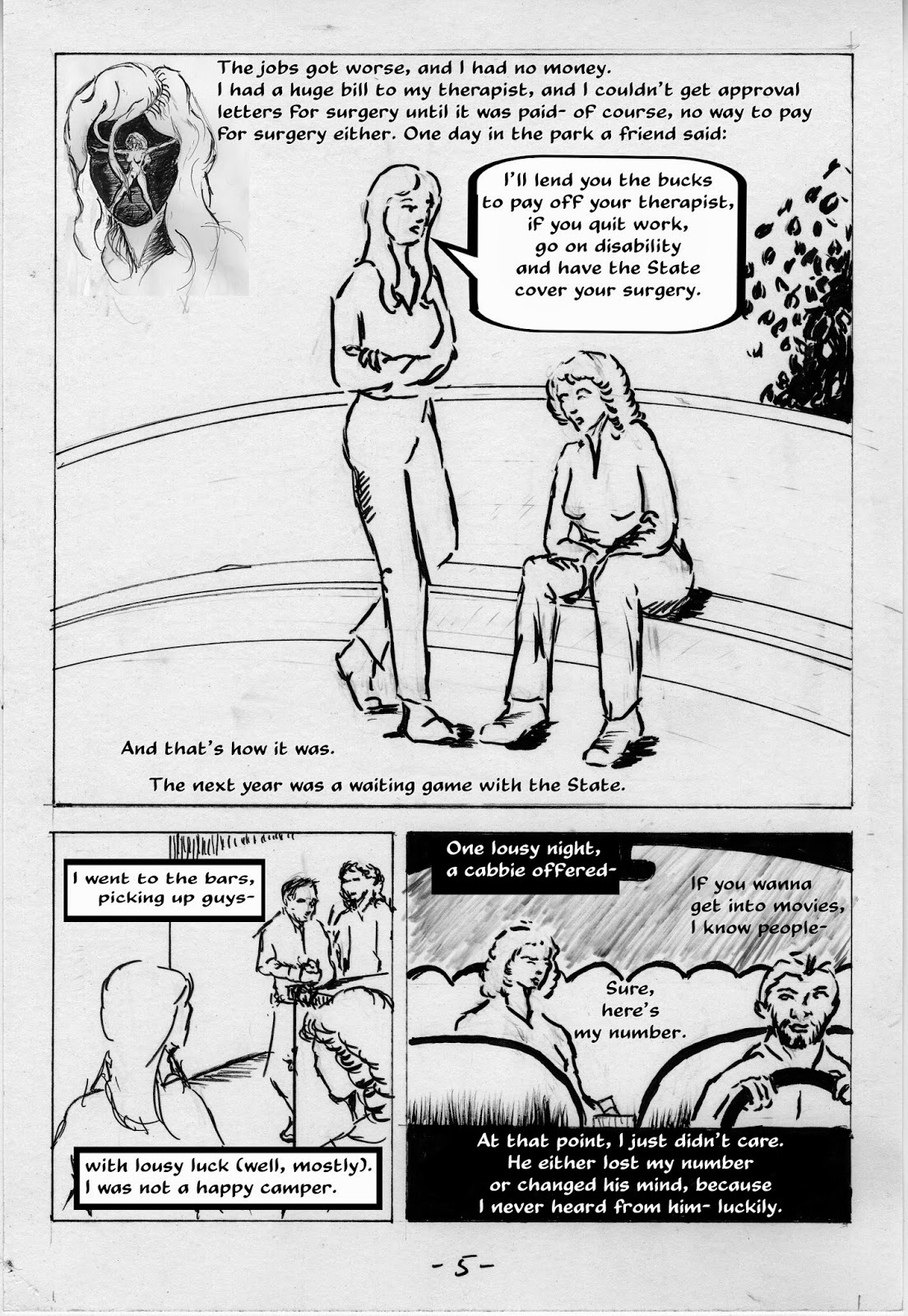 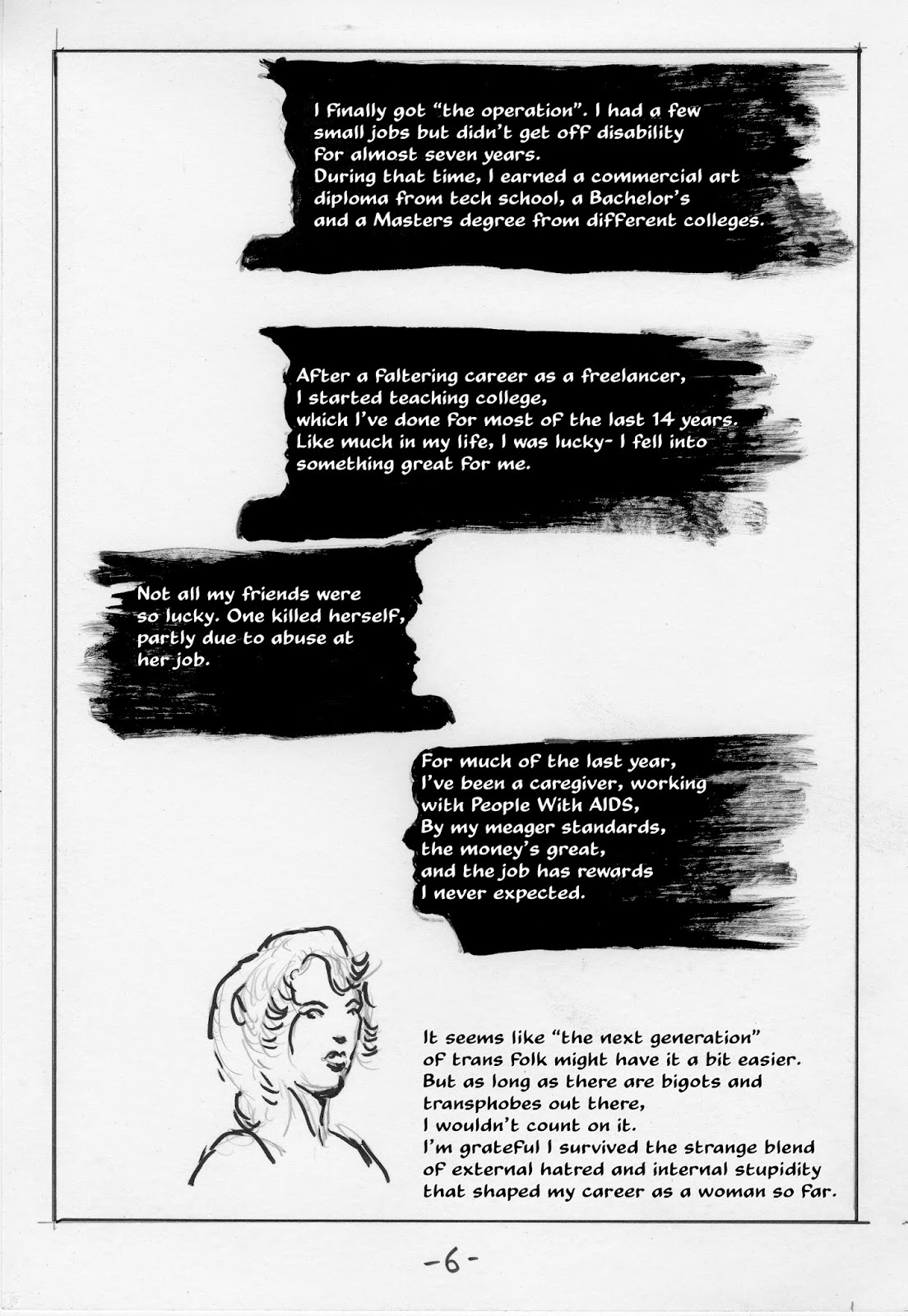 Some thoughts on process: I worked these up in the sketchbook, then did finishes on Bristol, scanned and lettered digitally. I deliberately avoided some of my usual clean-up. I like the slightly loose, more informal look on these pages. Some of the visual devices, like the text dropped out of brush stroke silhouette on the last page, may see use again.
The image at the top of page 5 is my illustration of Katchoo from Strangers in Paradise. I lifted it from a 90s sketchbook and dropped it in; it seemed perfect for the piece.
I'm using the Shape tool in Photoshop for word balloons, but I don't like the limited options, so I'm going to pick up a word balloon set from our friends at ComicCraft!
This was also an emotionally wrenching piece. I don't like to remind myself how close I came to doing porn. I know people who do it and are fine with it, and I bear them no disrespect, but it's not me.
Next: the new page of Maggie's Fairy Tale, a Surrealist Cowgirls adventure!