Progress was made on the new page since last post, but scanner access was inhibited by someone vandalizing my car (just a rock through a window, but I can't get it fixed till tomorrow).
One of these fine days when I have an extra few hundred dollars, whatever that is, I'll buy a decent large format scanner and not have to rely on the ones at work.
Until then, we persevere.
A few years ago, I joined a Yahoo group devoted to the cover and CD art created by fans for specialty CD projects by and related to Gentle Giant. The group, Retros Productions, has been dormant for the last couple months, aside from some irritating spam.
Therefore, as a caution, I have saved the images of my work form that site and would like to present them here.
The first are covers from remasters done by list member Marc Guilbert, quite good remasters at that. These were "treed" to the Gentle Giant mailing list, On Reflection. Before file sharing was as prevalent as it now is, we'd mail out CDs. Each recipient woudl send to three more members, till everyone in the list who wanted the material had it. You get the idea.
The Gentle Giant list is named after one of their more intricate and beautiful songs.

A bit prim for the tastes of some, but I love it.
The first of these included two albums, Free Hand and The Missing Piece, both rather high energy albums with distinctive covers. I integrated elements of the two covers and matched the typography of the dominant cover. 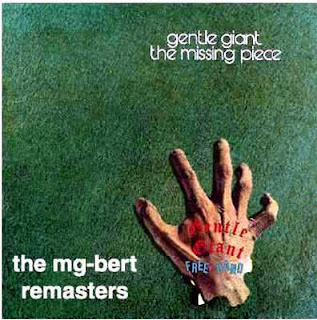 The second twofer, as we are wont to call them, was Three Friends and Acquiring the Taste, both more eclectic and varied albums.
Again, integration of elements from the two covers figured prominently. 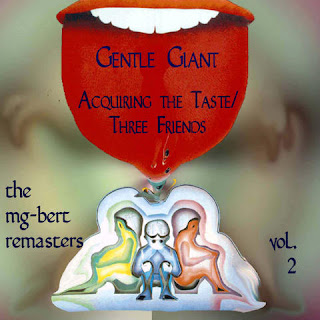 A bit of Photoshop foolery around the edges, and an attempt at typography that reflects the flavor of both albums.
Finally, the cover art and interior tray art for a benefit CD of GG-inspired material. We paid homage, and in the case of the one actual cover, royalties to the band.
Subsequent projects from GORGG Tribe, the aggregate that released this material, have been benefits for the Global On-Reflection Giant Gathering, or GORGG, and annual event going on, well, now, in Scotland this year. 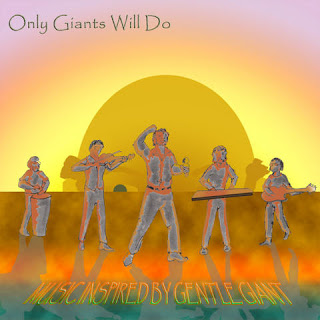 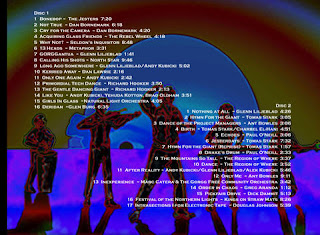 The idea here was a primal illustration of the band. I took a simple marker sketch and added elements in Photoshop and Illustrator. I actually rather prefer the inversion of the art used for the tray.
I perform on this as well. My ex, Jenny, and I recorded the track Girls In Glass under the name Natural Light Orchestra. One of these fine days I'll make a video of the number and get it up on YouTube.
I also have a recording with Anthony Bowes on last year's benefit CD, recorded under the nom de song DianAnt,  Think of Us With Kindness, which also serves as a memorial to lost loved ones. The track, Esther's Lillbulero, is available from CD Baby, if you are inclined to spend a buck for the track or a sawbuck for the whole album.
There's another project nearing completion now, but I'm taking a pass on this one to concentrate on my comics and my academic career.
I hope you enjoy yet another trip down Amnesia Lane. Next week, hell or high water, the next page of A Private Myth, completed!
on October 17, 2010 No comments: