Another one that eluded me at first. Hence its presence on the 2010 list, not the 2009.
CHEW is about a cibopath. For those not "in the know" that means that Detective Tony Chu gets psychic impressions from every food he eats.
Except beets.
As the series begins, he's working vice in Philly. His brother's an ex TV chef who had a psychotic episode on the air concerning the "chicken conspiracy" (more on that below).
While on stakeout, Tony and his partner John Colby observe Tony's  brother on infra-red. He's packing. Not heat, but meat. Turns out chicken has been made illegal due to a bird flu epidemic, and the FDA now has more power than the FBI. As a result of this, there's a huge bootleg traffic in chicken parts.
Well, that's a summary of the first 6 pages of issue 1.
After a preview in The Walking Dead no. 61, the book took off. It remains one of the few books to demand any sort of coin on the back issue market, despite numerous reprints and a couple very tasteful (sorry) TPBs.
(House ad from Walking Dead No. 60) 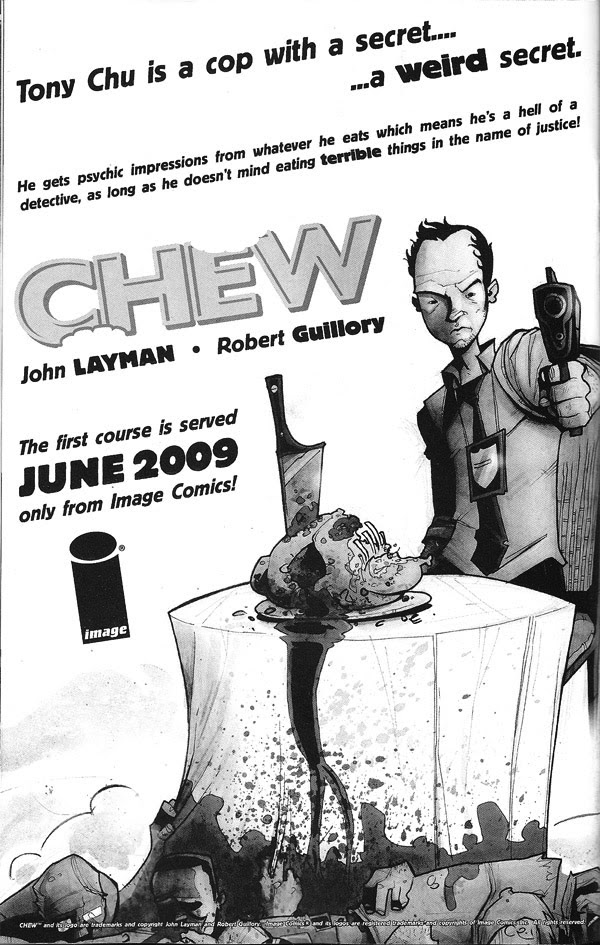 Ahem. Back to issue 1.
Tony and Colby are having lunch, when Tony's gift/curse reveals that one of the sous chefs is a serial killer who eats his victims and cooks with them, serving the results to restaurant customers.  They confront him. Colby gets a hatchet upside his head for his trouble.
At the end of issue, Chu becomes an FDA agent. He works on cracking the conspiracy behind the bird flu scandal. Colby becomes his reluctant partner, following a facial reconstruction that leaves him looking like a poor man's Terminator.
As the story twists the readers into abstract sculptures, Tony finds a girlfriend, a food critic whose reviews are so well written that they make people taste the food.
It's also revealed that Chu is one of three cibopaths.
Who are the others?
What is happening with the mysterious octopus-pineapple-chicken plant thing in issue 6?
It might seem like this facile device would wear out in short order. After all, the bit only works if you keep putting food with criminal ties of some kind on the protagonist's plate.
Surprisingly, writer John Layman and artist Rob guillory manage to keep it fresh (there's really no way to avoid food puns on  this one, so let's just muddle through, shall we?).
The book has been optioned for a TV series. The production company is the one responsible for The Walking Dead show on AMC, which is quite good, so I have hopes that the material will translate successfully. 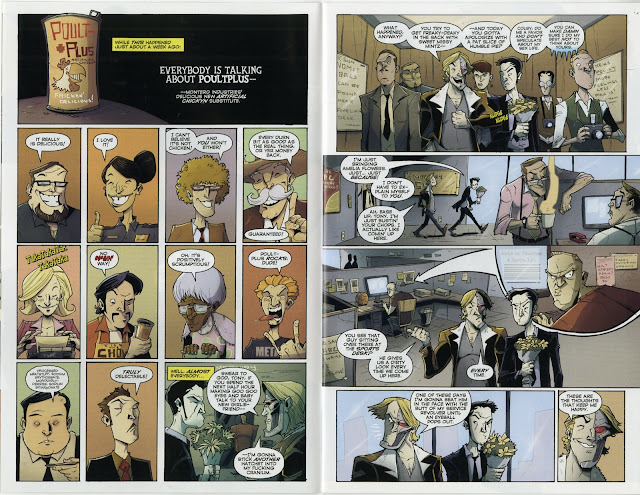 The comic's writing is action-driven, but not the expense of intelligence. A book based on an idea this wild could be terminally stupid. This is not. There's a delightful balance of humor, empathy and the macabre.
Not so surprising when you think about it. Some of the best horror stories are also comedies.  Perhaps instead of whistling by the graveyard, we ought to chuckle.

As with Meta4, kudos to Image for putting out such an unusual and delightful book. It's also to their credit that these books have such different styles and, one presumes, different core audiences. But then, I'm reading both, so possibly not so different.
Perhaps the difference, if there is one, is in the core readership for each book. People who read Meta4 might be more willing to give CHEW a chance than vice versa, akin to Clockwork Orange fans being more accepting of Singin' in the Rain than the reverse.
I hope the pop culture references in CHEW don't wear thin over the years. I'd like to see this book become one of those comics that is recommended for decades.
Hm. Maybe this cover really is timeless at that. 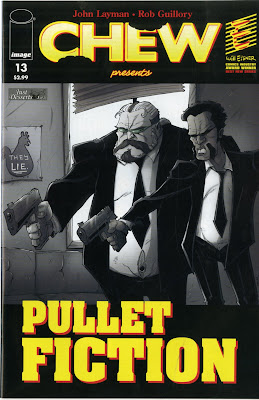