Only a day off schedule this week, but pleased with the outcome.
I've been trying to find something to break the tension in the current story. Yes, it was a tense time, but I've read graphic memoirs that are so sad and unrelenting. It's often a rough road. Sometimes, as was the case with Rosalie Lightning, while the book was achingly well done, I couldn't bring myself to finish reading it.
Here I was, considering a way to break the tension, just for a narrative minute. As a result of Emil Ferris' massive and well-earned victory with My Favorite Thing Is Monsters at this year's Eisner awards (I voted for her in every possible category!), I was inspired to reactivate an old idea.
Sidebar: if you haven't read My Favorite Thing Is Monsters yet, do so ASAP. 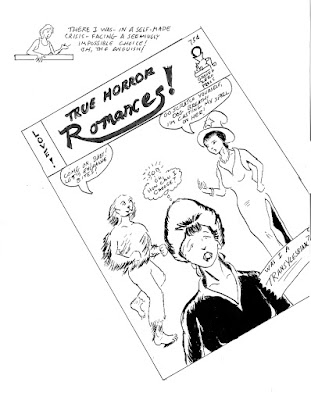 For a while in the 90s, I was playing with pastiche romance comic covers. One of my favorites involved a cheerleader enrolling at Miskatonic University. I was also tickled by the word play of combining trans and lesbian as a monster thing.
Transylesbian. Ha!
I first worked up a version of this as a self-portrait idea for my senior year at MCAD, but instead I went with a black velvet painting, which I'm a bit sad I no longer have.
The idea for this fake cover resurfaced every now and then. I kept mulling that one day I'd find the right place for the idea to come to life, as it were.
And here we are.
The references in this are all over the place. Of course, there's the EC reference in the formatting and trade dress. I used my Ground Zero Press logo instead of the EC logo. While I'd like to channel some of the more decorative of the EC artists, like Crandall or Williamson, my loose style is more Johnny Craig. Craig told a good story, so I'm fine with that.
Other little things of note: of course, the Witch is wearing a Cheech Wizard hat. The werewolf rendering is inspired by the work of fellow Minnesotan Mike Ploog. He also tended to work in a freer style in his comics. Since the werewolf is supposed to be Curt, I also had to think about drawing a bald werewolf.
I suppose I could have thrown in a background, but for this one, I think simplicity is my friend.
Does it advance the story? Well, as alluded to above, I think perspective is crucial on this stuff. We're two pages away from things getting REALLY bad, and one of the things I've had to come to terms with is the contributions my emotional state made to these problems. Not to say I was at fault, because abuse victims are NEVER at fault, but as a former lover once told me, "you worry too much." So this is a mildly self-deprecating recognition of the inescapable fact that I worry too much.
Technical notes: I neglected to trim this page before starting it, so it's slightly disproportionate to the other pages. I'll either re-do it or scale it down and give it white border to conform to the other pages. The supplies used are pretty much the same as on the previous page:
Canson Recycled Bristol board
No. 3 and 6 Staedler pigment liners
lead holders, leads and graphite sticks
Magic Rub erasers
Crowquill pens
No. 2 and 4 Richeson synthetic brushes
Surprisingly, no white out on this one!
This might need a bit of fine tuning, but I'm pretty pleased with it as is. And I hope the readers have as much fun with it as I did. Even in a tough part of the story, you can't be grim all the time.
Next: back to the narrative, containing an unexpected declaration.
on July 23, 2018 No comments: