I will write more on this tomorrow. The post will be expanded, but I wanted to get it out there that tonight's Shawn Phillips concert was amazing!
Here's me and Shawn, courtesy of my cheesy cel phone. 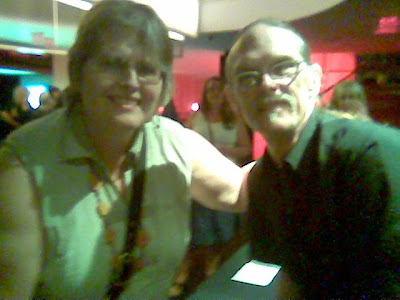 More details about this fantastic evening tomorrow!
Well, as Martha and the Muffins once sang, let me tell you, it's tomorrow and I never know what tomorrow will bring!
Shawn details:
Show started promptly at 7:30 as is Shawn's way. He made his entrance from the top floor of the 2-story stage setup and walked down the prop spiral stairs, which was big fun!
Shawn's playing with a band for most of this tour. I'd rather see him solo, but this band was a good complement to him. Talented players who knew when to step in and most importantly, when to hold back. Passion and restraint are such a difficult combination!
Here's some rehearsal footage with the band from earlier in the day.


The show was one long set, a little under two hours.
While Shawn was in voice and on for the night, and the material included stuff not performed publicly for more than 30 years, I was most struck by the philosophical and moral content of Shawn's works.
He spoke of the three things he tries to include in his writing:
Anger
Wonder
Technique
Anger is an awareness of what's wrong and a willingness to try to do something about it.
Wonder is a continual appreciation of the beauty in beads of water on leaves, an awareness of the delicacy and endurance of nature, of life.
Technique is balancing the two.
I've never heard it put quite that way before.
As often happens during a Shawn concert, I marvel at what the man has survived. Last night he told us about his 1976 accident, when his long hair got tangled in the propeller of an outboard motor. He was in critical care for three months and spent another four in recovery. The doctors were afraid he had brain damage and would never be able to write or compose again.
Much of the evening was about craft and possibility.  When I'm honored/confronted by the work of a creator of Shawn's caliber, I find myself torn between feelings of tremendous inadequacy and aspirations to immense possibility.
The evening was archived, which gives me hope that there may be a DVD in our future! (addendum: learned that there will be no DVD of this one).
I'll let one of my favorite Shawn songs close. This is from the MN Zoo performance two years ago, the best Shawn Phillips show I've ever seen. I encourage you to buy the DVD!