The aftermath of a big moment. Sort of a reveal but not really. I had a devil of a time explaining the panel layout to Diana Nock, seated across from me, as I was roughing the pencils. "No, the figure will not be broken by the panels. It's just- you'll see."
I really like this. It's a much older device, I'm sure, but I first became overtly aware of using the empty panel as a pacing device through Terry Moore's work on Strangers in Paradise, linked to in earlier posts. 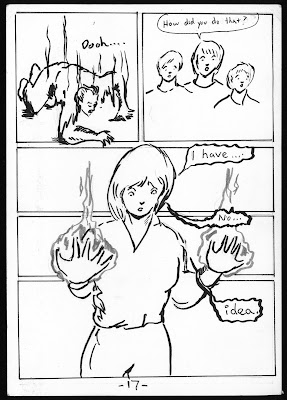 Again, sparse backgrounds, which can be forgiven if the blacks give enough weight and color to  hold the page. In fairness, this page could use more weight, visually. Resisting the temptation to tweak the work! Did a crop and ran levels in Photoshop. That's it.

Next week: two or three pages, including an homage of the most fun order.