Time to announce the Best Comic of 2012.

This has it all. Spellbinding beautiful art, three compelling stories woven into one, serious subjects including immigration and gay issues, and spirit. So much spirit.

I haven't read the author's book PUG yet, but I used Derek McCullough's Stagger Lee as a textbook in my recently ended Graphic Novel class (the students loved it), so I'm familiar with his deft handling of music as a narrative vehicle.
In Gone to Amerikay he ties together the stories of two Irish immigrants separated by ninety years with the tale of the wealthy descendant of one who's searching for his musical heritage, forty years after the fact.
In many ways it's a classic Irish tale, full of ghosts, ballads, drinking, joy, sex and life, set against the backdrop of New York. The dialects are spot on without being demeaning. The stories flow well and intertwine cleanly, though there are a couple points where less than astute readers will have to double back and check on something.
On matters Irish: the art is by Colleen Doran, who shares my love for the band Horslips, and who keeps up a "No Irish Need Apply" sign in her studio, as a reminder of hard times and harder people past.
I've been following Colleen's work since A Distant Soil debuted as a preview in the Pini's Elfquest. I've enjoyed her work on J. Michael Straczynski Book of Lost Souls, some key issues of Sandman, Wonder Woman, Legion of Super-Heroes, one of my favorite graphic novels, Warren Ellis' Orbiter (I happened on a signed and sketched copy in a used store, more fool the anonymous "Curt" who got rid of it) and of course, A Distant Soil, which she is closing in on finishing. She's a canny businesswoman, informed and strengthened by the hard knocks life has given her (mostly in the form of creeps trying to take advantage of her in some way).
Sidebar: I purchased a Book of Lost Souls page from Colleen last year, but neglected to ask for one featuring that wonderful cat, so I guess I'm as much a fool as that "Curt"was.
Back to Colleen:
She's produced a formidable body of work over the decades (has it really been that long?), and though she chooses her material carefully to balance time, deadlines and the likelihood of the person or organization promising her payment honoring that commitment, she does continue to create, and just gets better.
Ahem. Case in point. 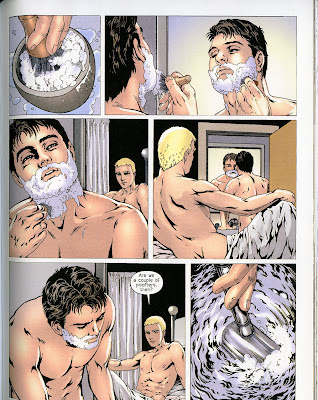 Can Colleen draw beautiful men or what?
Also, the precise illustrations of mundane daily activities, like shaving, enhance visual storytelling no end.
Here's a page from the sequence set back in time. Remember, while each story is told chronologically, they are intertwined in the book.

Sometimes I read things with too critical an eye, noticing structure, editing, artistic flourishes and so on. while this has its uses, it can be demoralizing, like that moment after you realize that cartoons are thousands of drawings, and the time afterwards where all you can see is the individual drawings, before cartoons get their magic back. The best stories are the ones in which I forget to critically dissect the content and get sucked into the story's world. Gone to Amerikay is one of those stories.

So we have the tale of Clare O'Dwyer, 1870;
Folk singer Johnny McCormack, 1960;
and Irish billionaire Lewis Haely, 2010. It's his search for the music he loves that ties them together.
But there's also a tie between Clare and Johnny.
Through a meeting with the ghost of her lover, Johnny learns the song he wrote for Clare, and finding her granddaughter quite by accident, learns that Clare's daughter is still alive. He meets her and is able to return the song to its family.
Having just watched What Lies Beneath on TCM tonight, it's nice to see a ghost story with a happy ending.
Being who I am, I have to mention the book itself- a slim but handsome hardcover, apparently PVC bound with black head and tail bands. And the cover of the book beneath the dust jacket holds a lovely blind stamp. 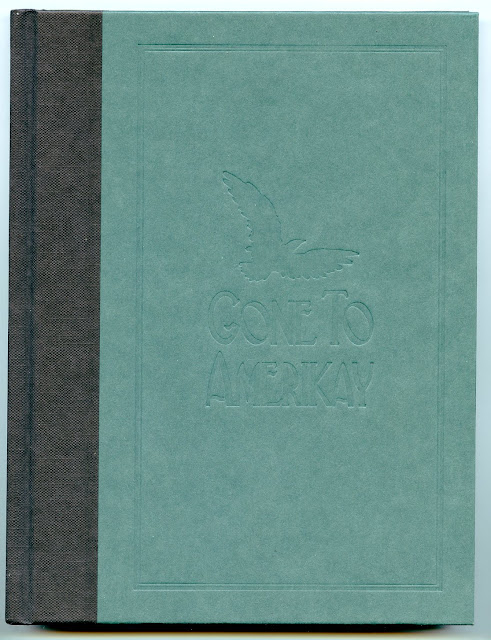 The coloring, by Jose Villarubia, whose work I've loved on Promethea and the bound edition of Alan Moore's The Mirror of Love, is subtle and suits the art perfectly. 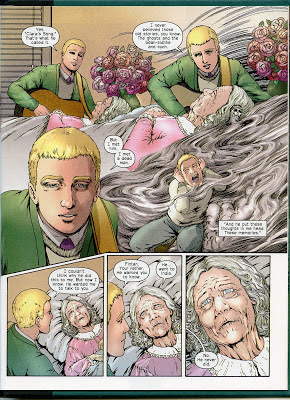 So congratulations to the Gone to Amerikay team.
You made my year.
I'm taking a couple days off posting to deal with work matters, but will return by week's end with some thoughts on Basil Wolverton. 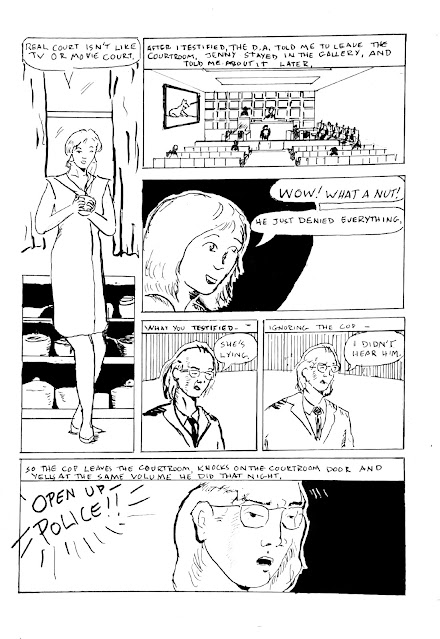