What a week! Somehow I got the next page done and did a good job, despite attending Autoptic and doing more prep for the MCAD Faculty Biennial show. Autoptic was such a delight! So many people I haven't seen for too long, a couple possible publishers, and bought a bunch of cool comics. There's some works where I like the art, some where I like the writing, and some where both shine. Such events lead me to ponder the possibilities of our chosen art form. In a conversation after the event, I mused on expanding my comics work. I was told I'd never make a lot of money, but that's not the point. I want the same things I always wanted. I want to tell my stories. I want to improve my craft. And I want someone to get something out of them. If I can get a few bucks or some recognition/accolades along the way, that would be great, but that's not why I do it. Events like Autoptic remind you of that, in the best way.

Ahem. The story at hand.

When we left our hapless couple, he had just thrown an ashtray at me. It shattered on the wall behind me. Then he trashed another guitar. 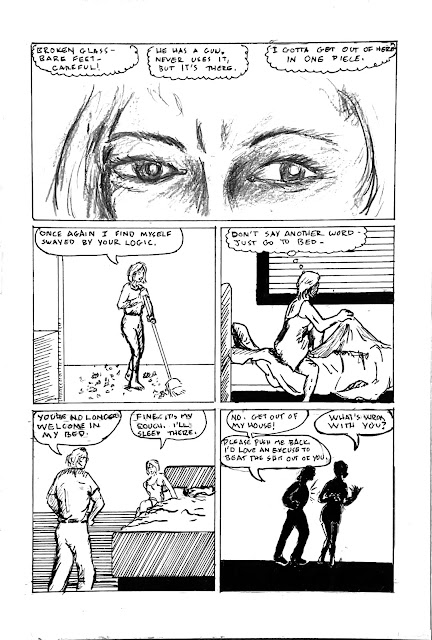 I like a lot about this page. The top banner panel, done in pencil, is quite effective, I think. Breaking up the thoughts in a banner panel is a nice pacing device. I'm sure it's been used before, but I don't recall seeing it anywhere. The next three panels are clean and serviceable, but the silhouette of the strange action in the last panel also works well. So often the simplest things pose the most interesting artistic challenges, like a woman sweeping a floor or getting into bed. He never did use the gun, but it was in my thoughts, so it's part of the story. My line in Panel 2: I was taking a real risk, being that sarcastic when he was escalating like that. He'd knocked me down a couple times before that, but there's a clear and dangerous progression to these things, and he was very close to giving himself permission to physically attack me more intensely.

The moment in the last panel bordered on absurdity. What a weird thing to do. He was pushing me with his torso, so he could claim he didn't lay a hand on me.

Thought on last week's page: one of my readers liked the iris panel of his hand grabbing the guitar neck. That inspired me, so I might put together a small sketchbook of guitar illustrations I've done over the years, and throw in a couple new ones. I don't want to lose sight of my big goal, but there's something to be said for completing a small project along the way.

Almost no ink brush work on this page.

Tools for this page:

Next: one foot out the door in the coldest of winters. 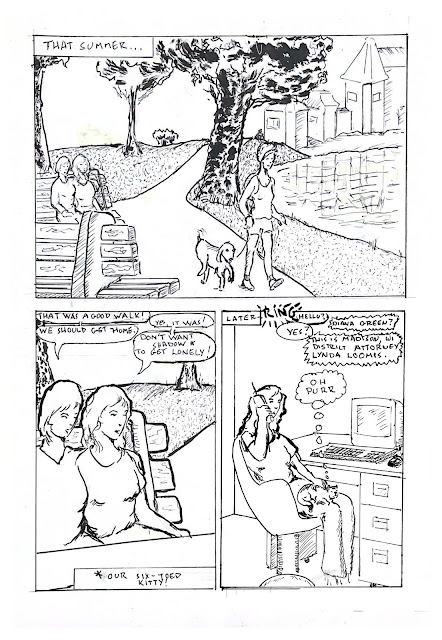