If it please the court, will the witness stop flying about the courtroom?

There's a new exhibit at Yale devoted to comics and the law.
Of course, comics and the law have a long history.
In addition to the legal battles fought over comics themselves, ranging from the early Superman lawsuits to Marvel's attempts to hold up production of the Rocketeer film over characters with similar names, there have been many characters who practiced law.
The earliest of these in superhero narrative may be Two-Face, the Batman villain who is a scarred district attorney, discussed in this snippet from Frank Miller's Dark Knight Returns.

Two-Face first appears in Detective Comics #66, about 4 years into Batman's run.
Matt Murdock is possibly the most significant attorney in comics in the last 50 years, better known as Daredevil.
Here's a scene from the classic Frank MIller run that shows integration of Murdock's profession and his, ahem, avocation. 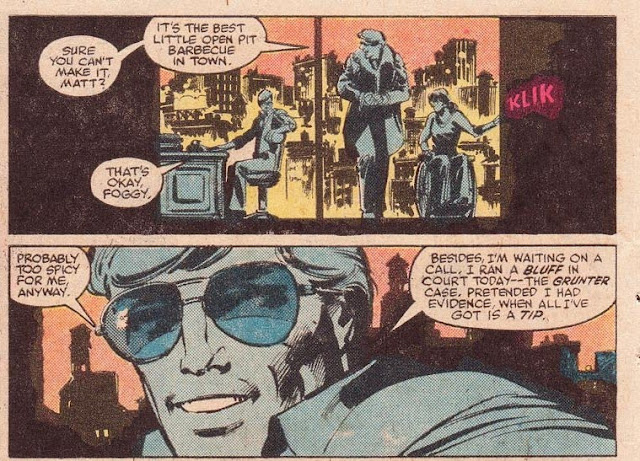 Of course, the deal here is that by detecting pulse rate using his heightened senses, this blind lawyer can tell when someone's lying- except in this case, where the culprit has a pacemaker that regulates his pulse! So this in turn effects the way Murdock practices law and the way his deferred identity functions.
Here's the denouement in a later plotline. The adversary realizes the truth. 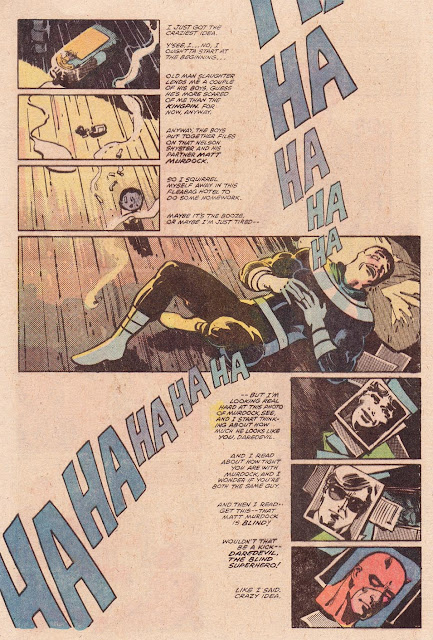 And my personal favorite, Daredevil #7, with that great Wally Wood art.
Prince Namor journeys to the surface to file a lawsuit against the surface dwellers (that would be us). 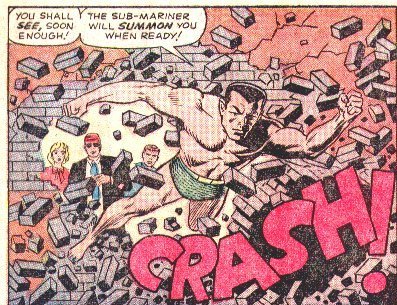 Frustrated with the slow pace of the court system, Namor breaks out of jail and runs rampant in the city. Of course, Daredevil must stop him. 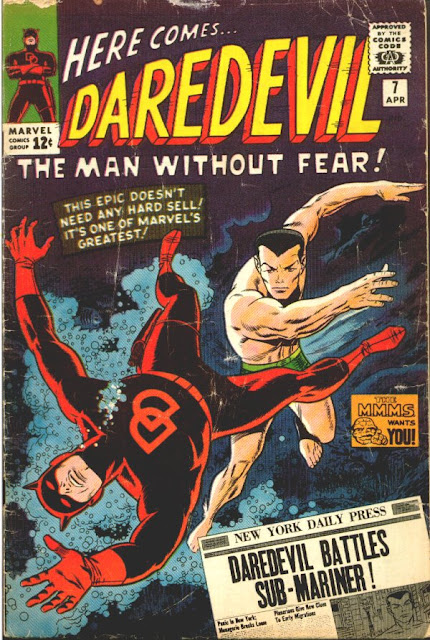 The above DD images are all from the delightful Matt Murdock Chronicles blog!
Here's a recent case from Marvel Ultimates. Once most heroes' identities are known, Banner is put on trial for the crimes of The Hulk. Guess who defends?

Of course, comic narratives have been playing fast and loose with the workings of the law throughout their existence, just as have television shows and films.
However, this has evolved. Superheroes often used the courts as personal vehicles, as in this Lois Lane story. Who knew both Superman and Batman were licensed to practice law? In an early 60s story, Superman was on the witness stand and questioned regarding his secret identity. His response was to write the name of his alter-ego on a chalkboard. However, it was written so fast that it melted the slate board. The court accepted this evasion as a valid answer, seemingly without question.
Flash forward to the same question being asked during a murder trial a few years ago.

There's a fascinating analysis of this and related issues over at the Strange Horizons blog. I don't completely agree with it, but it's very insightful.
For decades, Attorney Robert Ingersoll had a column in Comic Buyer's Guide titled The Law Is A Ass, which dealt with legal issues as related to comics content.  An archive of these fascinating columns can be found here.
I doubt this intriguing topic will ever be exhausted.  But we have advanced the portrayal of the superhero in court a great deal since this was all we had.