As I prepare wildly for Christmas (one of my favorite times, but so hectic!), I'm given to reflect on the last year.
You know, the one that's wrapping up now.
Dickens had a gift for understatement. Times glorious and tragic.
My career was full of opportunities this year. Many of them, such as presenting at both national and regional PCA conferences, were satisfying and promising. However, I had the lowest level of paying work in 2010 that I've had for more than a decade. I won't bore you with the ensuing economic woes. Suffice to say it's been a snug year, at best.
I have three writing jobs to finish by mid-January. All will be published. One pays.
Mind, this is in large part the academic's lot in life. And though I came to this career late in life, I am loath to part with it, despite its continual setbacks. As the Genesis song says, these are the hands we're given. My Deity, I just quoted a post-Peter Gabriel Genesis song. Oh, the shame, the perfidy.
Ahem.
My hope for the scant remaining days of 2010, and for 2011, is that I will complete some or most of (perhaps all?) my projects, and that I find a creative outlet that provides me with much-needed revenue.
I suspect that, for many of us, Alfred Bester's observation will hold true. The future will be like the present, only more so.
Politicians will bring hope and disappointment. We humans will continue to mistrust one another, and on blessed occasion we will put our skepticism and fear aside and allow ourselves to treat each other decently, giving us hope that we can do so again.
And a few more people will decide that art is worth something.
In reading over my class evaluations for this semester, I was struck by the following comment:
"I learned way too much."
What a fascinating variation on Woody Allen's observation that life is full of pain, suffering and misery, and it's all over much too soon.
Sadnesses: a premature end to a promising relationship, career and fiscal setbacks, and the losses of Charlie Beasley and Harvey Pekar.
Joys: Rediscovering old comics artists, rediscovering my older comic art and finding it to be much better than I recall, and seeing the Greenwood Encyclopedia in print with me as an editorial board member.

And I live in the hope that next year is exactly like this one, only more so.
Some rather charming thoughts and images about the possibilities of life from two of my favorite creators: 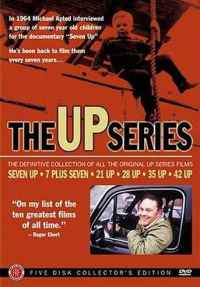