Now, I'm not as locked-in anti-revisionist as this is going to sound. But I have a big problem with this film.
I've seen some remakes I've enjoyed, and quite a few I have not. In general, it strikes me as lazy filmmaking- rework an old idea just for the sake of marketing, rather than come up with something fresh. That's why I give kudos to Marvel for the upcoming Guardians of the Galaxy film. While Marvel is also milking successful franchises like Thor and The Avengers, they're also breaking some new ground, taking some chances.
Maleficent, however, has two problems.
First, it seems to aping the success of recent revisionist fairy tale TV series, which in turn are aping the success of Vertigo's FABLES, which in turn is building on similar notions going back to Gaiman's Sandman and much farther back than that. That's not inherently evil. I'm rather enjoying NBC's current Dracula series, and that's hardly fresh territory.
The other problem is Maleficent's relation to its source material. You can't say Disney and Sleeping Beauty without thinking about that incredible 1950s design work. The film was visually stunning in a new way, reflective of its times, and its look remains iconic.

Yet Maleficent appears to be another live-action effects-heavy take on an old Disney story, like Sorcerer's Apprentice a few years ago. And I suspect that, in the long run, it will be every bit as forgettable. I only hope that people who are first exposed to the characters through this film won't judge the original work relative to it. Lest you think this unlikely, I have students who have used Zak Snyder's film version of Watchmen as the standard by which to judge Alan Moore's original work.
The point: once a watered-down version is out there, it's hard to take it back.
You'd think Disney would have learned that from The Lone Ranger. I still ache for a good and respectful film version of that character! I only hope I'm wrong about this, and that the characters in the 1950s Sleeping Beauty remain memorable.
on November 13, 2013 No comments: 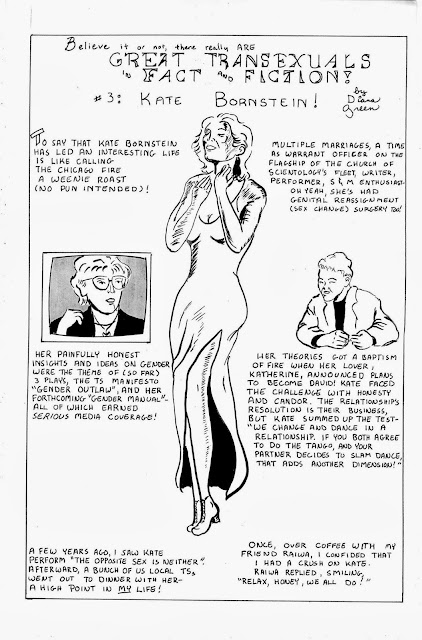 Only two or three pages left to this story. Diligently working on the denouement. Again, thanks to all my readers for your patience!
Here's the next page. Still in the fight scene. Maggie has Kay's wand, and has urgently ordered Tolcanan and Chiss to do... something.... 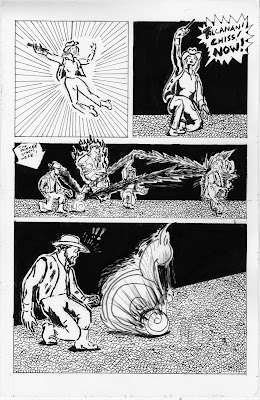 So it appears to be up to Chiss now!
Swipe file notes: the pose in Panel One is from an online photo of a leaping woman playing soccer. The pose in Panel Two is from the first issue of Alan Moore's Miracleman.
My biggest concern on this page was getting the path of the mystic energy to read right. It's supposed to bounce from Tolcanan to Chiss, then up to the wand, over to Kay and back.
This page is also the first page in this story not to include an appearance of Whalliam, the Thinking While He Floats Whalemule.
Next: the fight ends, almost.
on November 03, 2013 No comments: