For someone whose most pub publicly recognized works, Watchmen and V For Vendetta,  appeared around 30 years ago, Alan Moore is having a pretty good year. Not only are the reprints of Miracleman proceeding apace (which Moore may not care for), but his Electricomics site is up and running (if a bit challenging to navigate), and his work with Top Shelf proceeds swimmingly, including reprinting his neglected Bojeffries Saga..
In the latter arena, Moore and cohort Kevin O'Neill continue to hash out League of Extraordinary Gentlemen one-shots. Last year's offering, Heart of Ice, was the first to spotlight Janni Nemo, daughter of THE Captain Nemo, who was killed and left his legacy to her in Century: 1910. In March 2015, we will be graced with Nemo: River of Ghosts, creating a trilogy. I hope for an omnibus hardcover. 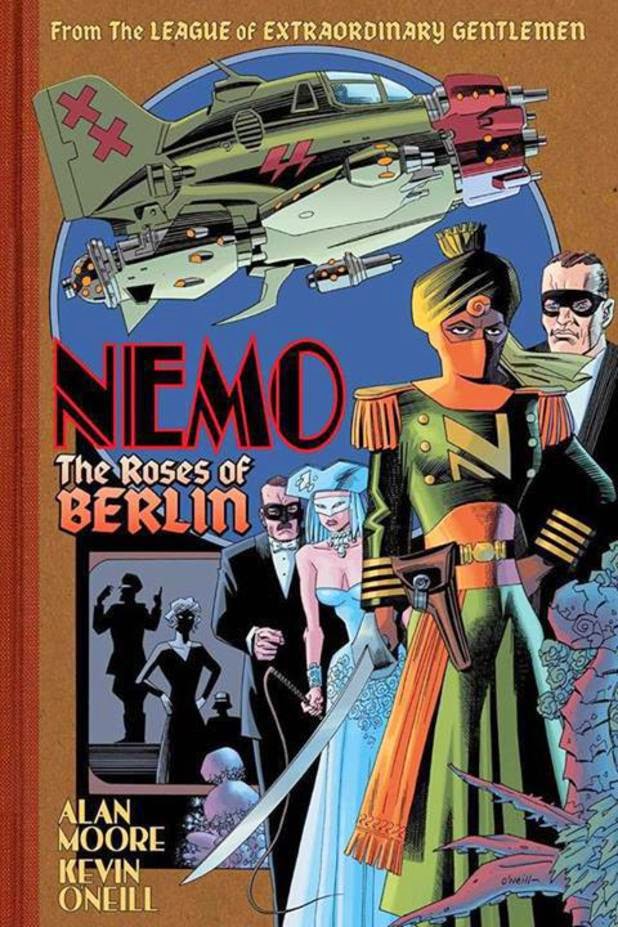 The central piece of the trilogy, 2014's Nemo: The Roses of Berlin, is typical Moore, if there is such a thing.
The story is, as always, a pastiche of cultural references. Some of these, such as the use of Chaplin's Hinkel character from The Great Dictator, are rather obvious. Others, references to Lang's Metropolis, Verne's Master of the World, H. Rider Haggard's SHE (a recurring theme/character in the League stories), and Robert Wiene's Cabinet of Dr. Caligari, are sometimes less blatant.
All the references, fun as they are, take a back seat to adventure in Roses of Berlin. This thing is the Indiana Jones of the League stories, nonstop action from the onset. A quick overview shows a total of six of its 56 pages are exposition driven (exclusive of the obligatory text piece at the book's end). It should be noted in passing that the first of these pages is entirely in German, with no translation offered. That's fine with me, but it irritated some critics. I don't see that. Few expressed frustration with untranslated Martian in the second volume of the League stories.
Ahem. Be that as it may. The majority of the book is a long, well-executed fight scene.
Other critics have contended that Moore's writing takes a back seat to Kevin O'Niell's art here. Taking nothing away from Mr. O'Neill's work, I have to disagree here. Anyone who's seen an Alan Moore script is aware of the immense detail put into descriptions for the artist. Given that the script for the first panel of Watchmen is a full page of rather dense text, it seems likely that O'Neill is decoding a rather dense script here, and that Moore is hardly slacking off.
The story involves Nemo and her husband Jack attempting a rescue of their daughter and her husband from the fallen airship of Robur, the Conqueror.
Their efforts take them deep into a Berlin replete with robotic soldiers, chaotic architecture, Rotwang's robotic Maria, and a new adventure, television, all the while fighting and killing with deliberation, and sometimes with glee. 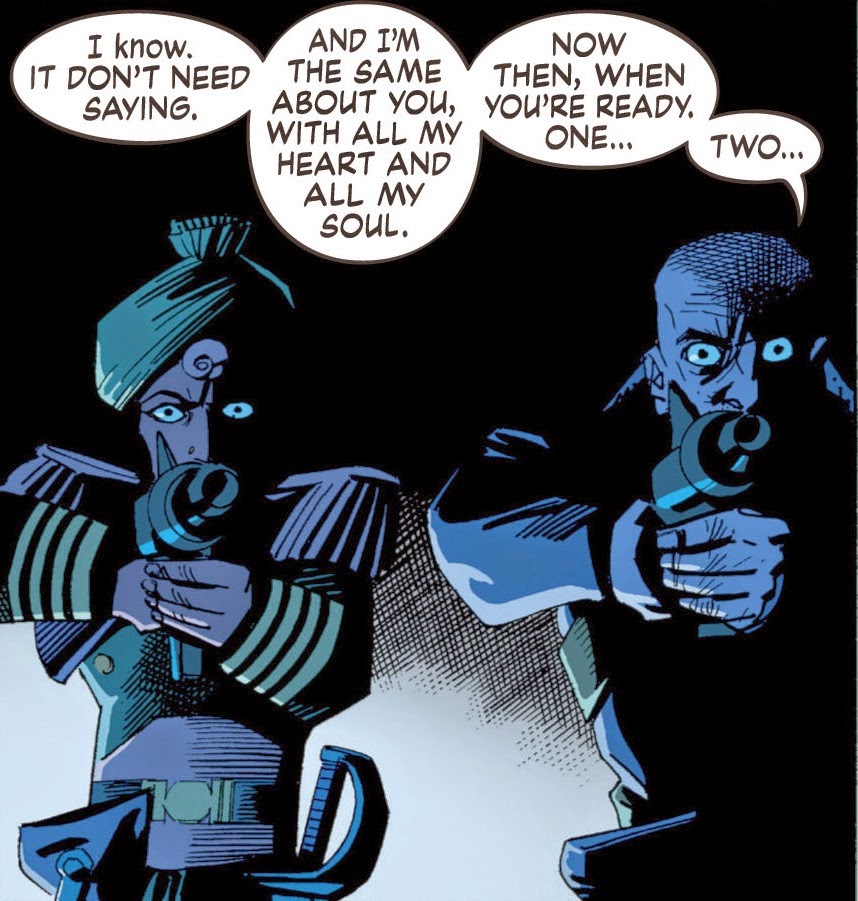 This is also a powerful love story between Captain Nemo and her husband Jack, whose tenderness towards her is only matched by his deliberation in defending her and the rest of his family.
It's worth remembering that despite their forays into popular literature, the League tales were begun as pastiches of adventure, science fiction, fairy and horror stories, either aimed at or embraced by young readers, especially young lads. So there should always be this element of high adventure.
It's to Moore's credit that he's able to inject a smart feminist subtext into what have historically been rollicking tales for pre-pubescent lads. Even the villain of the piece, Ayesha, is a fairly complex character, one whose motivations have been shaped by centuries of life and a drive to continue that life.
In terms of the book itself, it's a slight volume but well-appointed, having endpapers that frame the story (first depicting the attack on Robur's vessel, then Captain Nemo's devastation of Berlin after the rescue attempt- don't worry, there are still plenty of surprises despite that spoiler). It's a sewn volume, with tight binding. Due to its thinness, the spine is not rounded, which may effect its longevity. I suspect the collected edition will remedy this flaw. The volume is priced reasonably at $14.95 US, though I read a library edition and will wait to purchase the inevitable collection of the trilogy.
As always in Moore's work, it's vital to read the text piece. It fleshes out the story, particularly significant in this case.
But above all, it remains a love story. 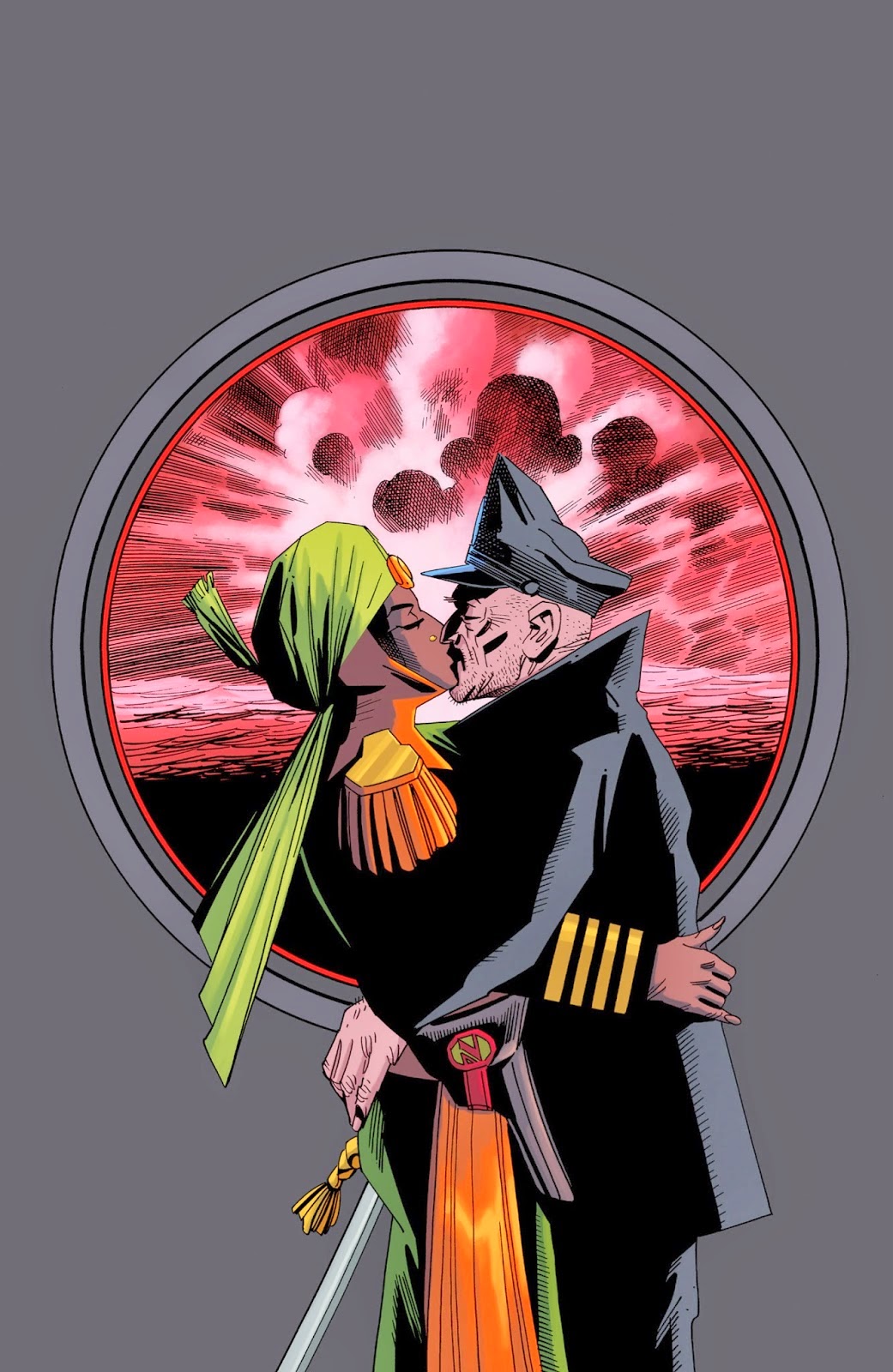