Trosper and Ignatz have met Gentle Giant. So have I.
I was in New York and CT last weekend for the annual GORGG- the Global On-Reflection Giant Gathering.
This was the 11th one. I've been to 8, I attended the events in New York; Toronto, CA; Amsterdam, Netherlands; Portland, Oregon; Evora, Portugal; Qeubec City, Quebec, Canada; and Denver, CO. I missed the ones in Wales, London and Germany for financial reasons.
I almost missed this one for the same reason. I've had fiscal difficulties of late, and have been getting some financial help from a family member. Although I bought my plane ticket months before these problems happened, I wrestled with the ethics of going at all under those conditions. do I spend money under these conditions or waste the non-refundable plane ticket?
I had a room share, which cut my hotel bill in half, and they gave us a great group rate to begin with. and I know how to eat on the cheap, even in New York.
I decided it was more wasteful to not go than to go, so I set about finding the funds I needed.
So I got busy and sold a bunch of stuff. I figured that if I raised the money for the trip by selling my belongings, especially ones I should let go of anyway, it served multiple purposes. I freed myself of stuff I no longer needed, I was able to take the trip with a clear conscience and not waste the paid-for-ages-ago plane ticket, and I rejuvenated my spirit by spending time with people who hold a special bond with me.
The music of Gentle Giant speaks to us all, almost three decades after the band ceased to exist.
This year, in addition to the special guests we've come to prize so- GG guitarist Gary Green, keyboard player and composer Kerry Minnear, and drummer Malcolm Mortimore- we got an unexpected treat. Frontman, lead singer and band founder Derek Shulman stopped by for a couple hours.
Here I am with Derek. 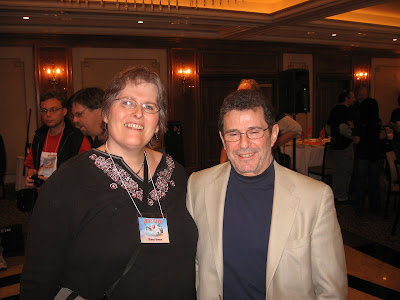 The camera was uncharacteristically kind to me, and Derek was quite gracious. We managed to avoid mobbing him TOO badly!

Later that night, there was a jam session with all the great players jumping in (Derek had departed by that point).

Here's some stunning footage from that night: Jamie Krutz on violin and my dear friend Paul van de Hart on guitar, playing the GG barnstormer Mobile from the classic album Free Hand!

But the shining moment was earlier in the day, as Wendy Boulding (thanks to our hardworking host Jon Roberts for helping me with Wendy's last name!) rehearsed Memories of Old Days with my roommate Glen Bourgeois sitting in on bass, and Gary Green and Alan Benjamin on guitars! My only contribution is at the end where I tell Wendy, "Nice pipes!"

Although I did go on stage with the boys in Denver two years ago, I didn't even try this year, much as I always want to. Too many really talented players. I decided to enjoy it for what it was.
Apres' jam, I joined in a very loose guitar bash that ran till almost 5 AM.
I kept coming back to the same thought I have when I talk with comics folk or when I'm with family. These are my people.
So many things come to mind when I think about this experience. Do I really have to travel halfway across the country to share this music? To share it with these people, yes.
As Leonard Cohen says,
"I came so far for beauty,
left so much behind"
Except that what I left behind here was a sense of being beat down by life. To say things have been tough this year is like calling the Chicago fire a weenie roast. I needed this.
This renews me in a way nothing else does.
I am going to do everything in my power to improve my fiscal lot so I can attend next year's gathering in Scotland with the ribald (in every sense) John Burns and his lovely wife as hosts. It's possible that John Weathers, a dear kind man and the drummer for most of GG's work, will be able to join us again. His health is poor, but Wales is not so far as all that from Scotland.
Here I am with my partner in punning crime, John Burns: 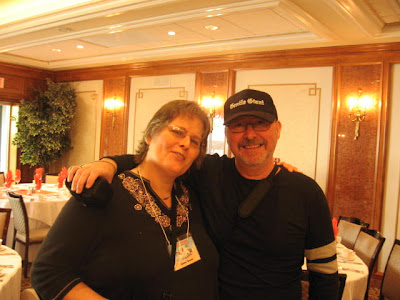 Its great to have a family of over 100 people who all know the words to the songs!