What, another book that builds on older concepts? That's all we've had so far!
Patience, folks. There are books based on original ideas coming up in the list.
Which is not to say that Night Force is not original.
The third series using this name and concept, Night Force is written by Marv Wolfman, best known as the creator of Blade in the 1970s series Tomb of Dracula.
The latter ended in 1979 and Night Force began in 1982, but I always felt it was overshadowed by its predecessor. This is due in no small part to the use of the same creative team- writer Wolfman and artist Gene Colan.
The first series ran fifteen issues, including its preview appearance in New Teen Titans no. 21. 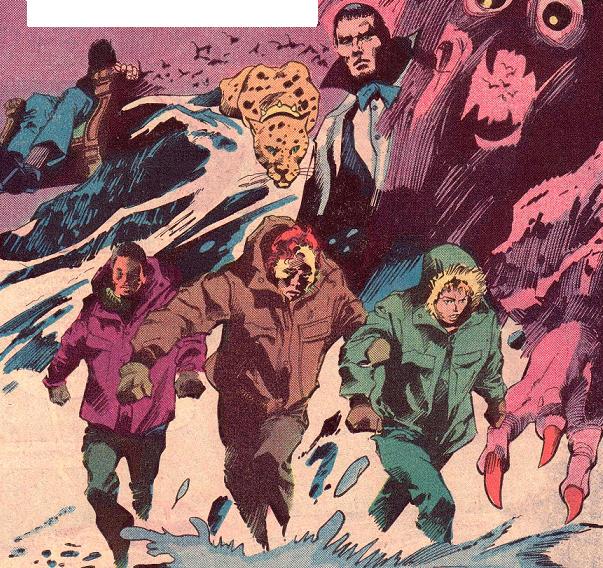 The second series of twelve issues began in 1996 and featured art by Brent Anderson of Astro City fame. Solid storytelling, but not as compelling as the original collaboration.
In all cases, the premise remains constant. Baron Winters, a cryptic figure with a questionable reputation the world of magic, recruits teams of disparate losers to serve his cause. While he does everything in his power to protect his hand-picked team, Winters is perfectly willing to use less than ethical methods, and will sacrifice his team members if need be. Sadly, this is a need that arises on a regular basis.
There are two other constants in this.
Winters has a leopard familiar named Merlin. It's been suggested several times that the leopard may actually BE the original Merlin.
Also, Winters never leaves his mansion. The doors to the mansion often lead to other locales and times when leaving than they do when upon entering.

In addition to these series, some variations on the Night Force team have randomly appeared in DC books over the years. Baron Winters was host to Harry Potter Tim Hunter when John Constantine was shuffling him about in Neil Gaiman's original Books of Magic mini series.
I had hoped to present the delightful dinner scene, but was unable to find it on the Interwebs at the ready. There's a marvelously tense and humorous  exchange between young Master Hunter and Baron Winters involving the rudeness of the Baron not addressing the young mage with sufficient respect, and the passing of tomato ketchup in a silver chalice.
Ahem.
Moving right along.
The current miniseries is a scant seven issues. This time, the art chores  go to the capable Joe Kubert School graduate Tom Mandrake. Though he's done a substantial amount of superhero and adventure work over the years, including a noteworthy run on First Comics' GrimJack and DC's underrated The Kents miniseries, Mandrake is at his best illustrating the supernatural.  His 1990s run on The Spectre and the underrated Fringe comic stand out in this arena.

Here, Mandrake and Wolfman (how's that for a team on a horror book?) tell of an attempt to stop the birth of an Antirchist/ Cthulu/ multi- generational demon child, cheered on by a centuries old cult. And wouldn't you know the Baron's prison/home, Wintersgate, is the ideal locale to focus such a birth?
The cult musters their forces inside the Baron's center of strength.
And all Hell breaks loose.
Perhaps.
I shan't reveal the ending.
In light of the numerous horror and horror influenced books that have succeeded since the original series- 30 Days of Night, The Walking Dead, Hellboy, even the quirky Chew has some elements of horror- does Night Force still stand up?
In a word, yes. It's not a bloodbath, but it has its horrific aspects. The horror is not only palpable but intellectually challenging. This is a book the reader has to work at understanding, but it's worth the effort.
My biggest quibble is that they changed the Baron's hair and updated his dress. I prefer the provincial cut and classic suit with bowtie and cape that he had in the first two series to the current metrosexual, stringy quasi-trendy look.


That aside, this is a fresh and welcome take on a tested concept. Sadly, Night Force has not always been well received by readers. First issue sales of this year's miniseries were just over 13,000. Hardly memorable. And the 2011 hardcover of the first series appears to already be out of print, which does not bode well for a TPB collecting this run.
My recommendation: haunt the back issue bins or check your local shop for a package deal. The search, and the series, are both well worth the effort.
Tomorrow: an odd double header for Number Seven in the Best of 2012, a beast and a snake.
on January 07, 2013 No comments: