Back after a week off for no reason other than the holidays!
Here are some older editorial pieces.
But first, a brief explanation.
In the early 1990s, there were two magazines on transgender politics that took a slightly more "street level" approach than the academic journal Chrysalis.
One was Davina Anne Gabriel's TransSisters, which we've discussed briefly in the past. Ran ten issues from September 1993 to Summer 1995.
The other was Gail Sondegaard's TNT NEWS. This ran from 1994 to 1997, running eight issues.
If memory serves, that is. I don't have all my files copies of the latter at hand.
At any rate, I did editorial cartoons for both.
One of the TNT cartoons, Pinkette and LaBrainne, has been published here before. I'd like to offer a couple others this week. These are two of my favorites. The art is serviceable, the writing is sharp and on point, if a bit dated for at least one of them, and they come together fairly well.
These will be included in The Complete Tranny Towers, if and when it's done. The first one uses a Tranny Towers character! 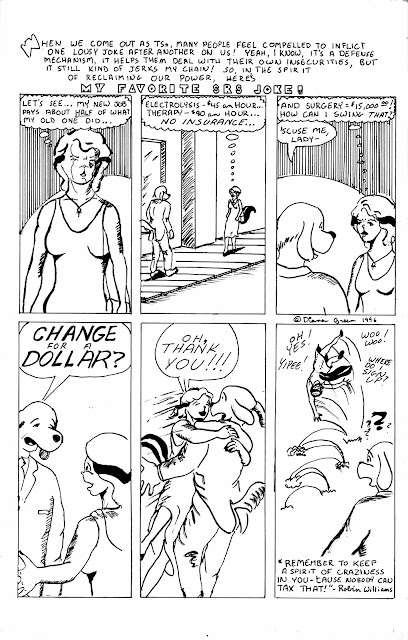 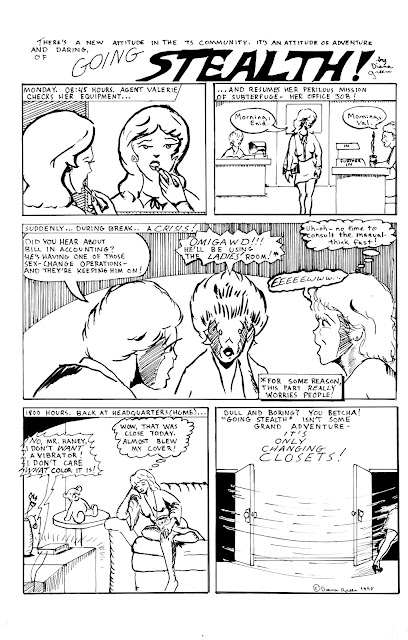 Actually these stand up better than I thought they would.
I do have to note that there are a couple others with alarmingly bad art. I will not post those, but will include them in the aforementioned book, with a healthy dash of mea culpa.
The "change for a dollar" gag is adapted/stolen from a Bernie Wrightson poster. See the end of this post.
And the Mr. Haney vibrator line is a classic among us devotees of Green Acres!
The issue of stealth remains significant, but has lost some of its explosively divisive properties over the years.
Still.... a story comes to mind.
My last girlfriend suddenly moved to Texas to care for her mom about a month after her final surgery.
A little odd, but then we all have choices to make and I respected her for caring for her mother, even though we were getting rather close and her handling of the matter hurt me a great deal.
We talked a year or so later, and she was dating a guy. She was quite happy.
Well, good. We all get to be happy.
But he didn't know about her past, and she wasn't going to tell him, and isn't that wonderful?
Well.... no, it's not.
I mean, yeah, it's wonderful that you succeed in the world so well that you have that option. But there's more to it than that.
Deciding when and where you're out about your gender history is a complex issue. It touches on matters of integrity, mental health and physical safety, not to mention just plain wanting to be accepted on your own terms. And every decision around it has to be weighed VERY carefully.
This stuff can drive you up a tree. I used to worry obsessively about who knew, who could tell by looking, who was and wasn't laughing, on and on and on.
That will put a real crimp in your day.
Then after the end of my abusive relationship, about which I've kvetched in the past, I started assuming everyone knew and stopped worrying about it.
The paradox was that many less people knew after I took that tack!
However, in the midst of all that, it must be said that there are some people who have a right to know if you respect them. Close friends, family and partners/lovers/spouses fall into this category. It's their business if you value them in your life. If they can't handle it, that's on them, but those are the people you should trust.
Tuesday is January 1, 2013. and I'll begin my Best Comics of 2012 countdown then.
New art resumes January 6.
Now, here's that Wrightson piece!

Posting a couple days late, just due to being too busy again. The scan was just sitting there waiting for me.
Now the page.
As you recall, our heroines were standing atop the onyx pyramid looking down into a miles-deep core of solid crystal.
Their plan was to jump in.
And here they go. 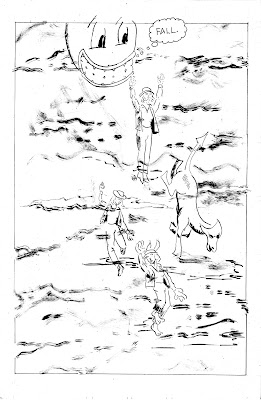 I got the idea of falling through solid crystal from Steve Englehart's Silver Dagger storyline in Dr. Strange.
The other inspiration was one of the covers of the Waid-Ross masterpiece Kingdom Come. I don't much care for some of Ross's work- too stiff- but Kingdom Come worked very well, especially in the larger Absolute format that doesn't overcrowd the claustrophobic art.
This is the image I had in mind when I plotted this page: 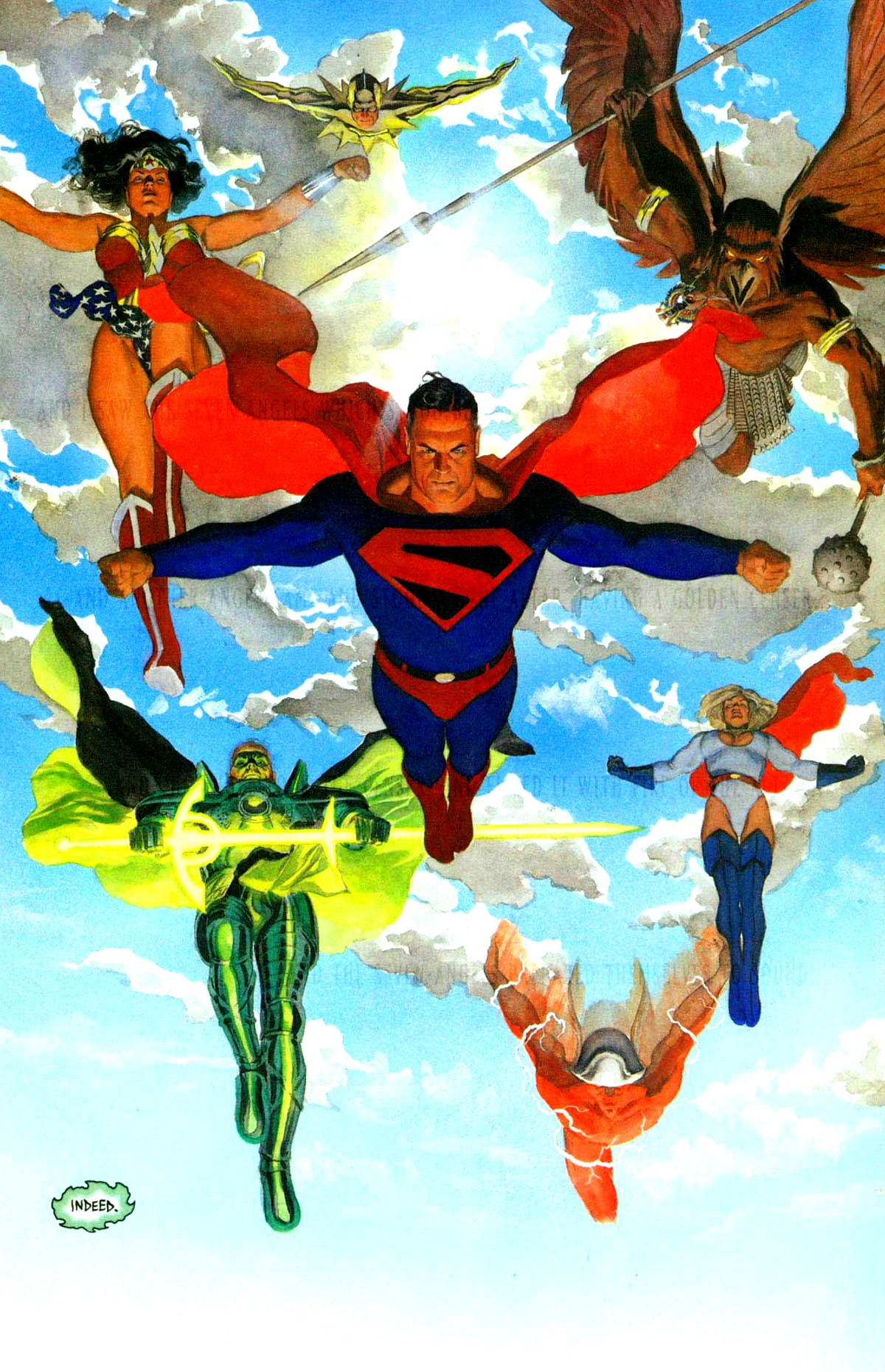 The notion of someone floating, cascading down through solid glass appeals to me on a very profound level.
No scanner access after Wednesday, but I do have a few images backlogged and I hope to scan an extra one when I'm at the Service Bureau tomorrow putting the finishing touches on some Christmas presents!
Things are building in our current story, and I hope to offer the next page first thing in the New Year!
I'm also building for my Best of 2012 list!

Finally took time to make minor corrections and post this page. I love teaching and writing, but they play hob with my art schedule.
Oh, for balance.
Ahem. The final page. 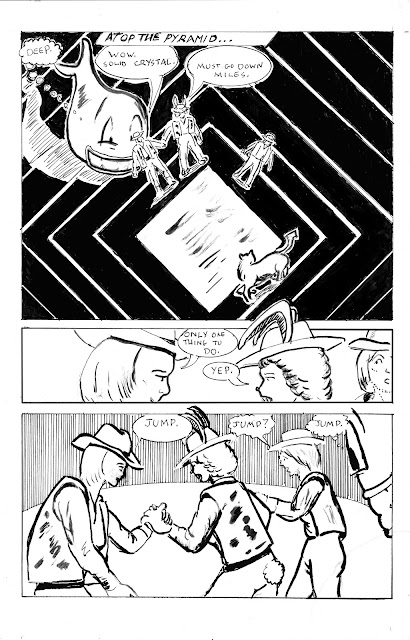 I went nuts trying to sort out the layout for this one.
An overhead shot of the top of a ziggurat...
it works fairly well, especially the part with Whalliam and Louise's mule. I cobbled the perspective on the figures from a couple panels in Watchmen, but it might need to be pushed further.
The other frustration I had on this page was that my ink was old and gummy and faded. After the page was done, I tossed it and am switching to ProArt Deep Opaque starting with the next page.
My original layout for this page, seen below and on the back of the final art, involved a less dynamic opening angle and a much larger final panel. The facial expressions were more involving, but it didn't really communicate a proper sense of place.
I'm really eager for the next page!
Next week... ideally the next page. We're coming up on a couple weeks of down time between semesters at MCAD, so I need to complete my scanning ahead if I want to continue to post. 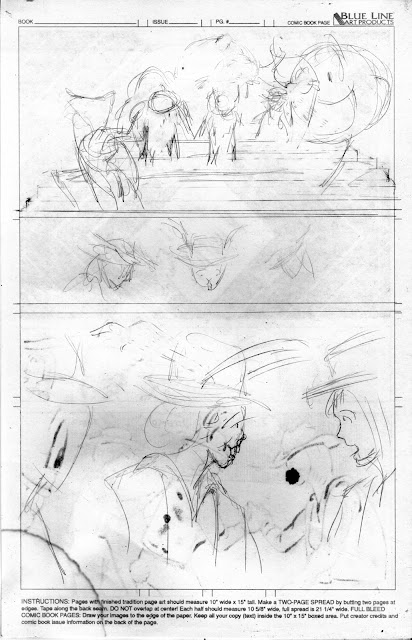