Wow, I can't believe it's been over a month since I posted! No excuses!
Here's a page I did for fun during my undergrad years.
Most people don't remember the Psychic Friends Network now, though they do still have a Net presence. My kid brother was doing work for them and for a phone-in Tarot reading company for a while. He tried to talk me into doing it. During our conversation, I asked him if he really believed in what he was selling for his $25 an hour (and that's 1990s dollars!).
He gave me a long, convoluted response that boiled down to "maybe. Sort of."
Anyway, bad typography and all, here's my parody of the whole thing: The Psychotic Friend's Network! 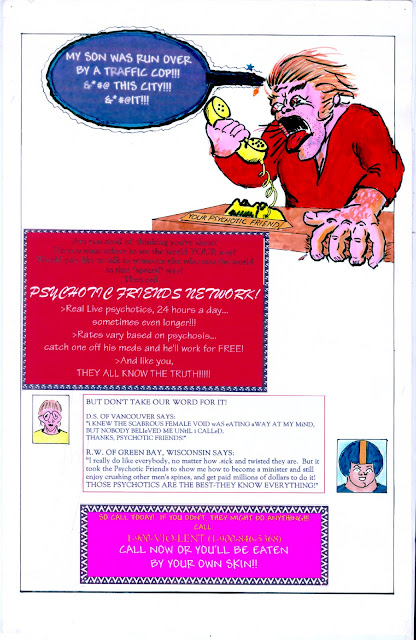 D.S. is  a parody of Dave Sim, whose rants in the letters pages of Cerebus about homosexuals and women (and especially homosexual women) were all the talk of the comic book community at the time.
R.W. is a pro football player whose name I can't recall (Reggie White, possibly? Not sure) whose rants on other people's morality was seen by many as being at odds with his plans to become a minister, which I believe he later did.
Some fun art and BAD typeface choices here! I really enjoyed drawing the guy on the top, the one chewing up the desk.
I printed up the text block on a cheesy home printer, using a cheesy design program aimed at housewives. I also used this program, because it was all I had, for the first couple Gentle Giant calendars.
The next page of Surrealist Cowgirls is nearly penciled. I've been poking at it far too long, but it's starting to take shape the way I want it to.
So next week... well, let's hope.