In 1990, I interned with Reed Waller on Omaha the Cat Dancer for six months.
Or as I put it these days, it was for about 5 minutes a hundred years ago.
It was one of the most catalytic (pun unintended) experiences of my life, both personally and professionally.
This experience, in tandem with my childhood of reading Barks Duck stories, before I had a clue who Barks was, and my 80s and 90s love of Don Rosa's work (note that my affections for these works continue to this day), has given me quite an affinity for the funny animal genre, despite it being a very loosely defined genre.
I mean really. Look at this Omaha image and this Duck image, and tell me where their commonalities lie, beyond the animal-as-person device.
Caveat: this work is not for the young in maturity. Adults only, please, in every sense. It involves people enjoying their bodies, and children can't see that until they're not children any more.  I think it's a little screwy, but that's the way we roll in this society.

Okay,the other similarity is solid storytelling. But that's as far as it goes.
Two points:
1. Waller and Worley did a more Barks-style funny animal story, the wonderful Speakingstone, which ran in two issues of Fantagraphic's Critters and was never completed.
2. I would also be remiss if I didn't mention that this Omaha page is one of the ones I worked on. My work was inking heavy blacks in the background, in this case.
Ahem.
In any event, as a result of the work of Barks and Rosa, Waller, Worley and Vance, Talifero, Freddy Milton, and so many more that don't come to mind as readily, the notion of humanized animals, or animals with human traits, has been a part of comics ever since there have been comics. What do you think Krazy and Ignatz are, after all?
A new character entered this delightful mix in the early 2000s, from Spanish creators published by the French company Dargaud. Writer Juan Díaz Canales and artist Juanjo Guarnido collaborated on the three graphic volumes of Blacksad. Sporadically printed in the US (the third book only recently appeared as part of this collection), they developed a reputation akin to Corto Maltese among devoted comics lover.
This year, Dark Horse published a goregeous volume of all three stories. That volume is my tie choice for Number One comic of the year 2010.

Another caveat: as always, these choices are based on personal criteria and quite arbitrary. If you have your own list, I welcome it!
Blacksad is a private detective. The story is set in 1950s America. 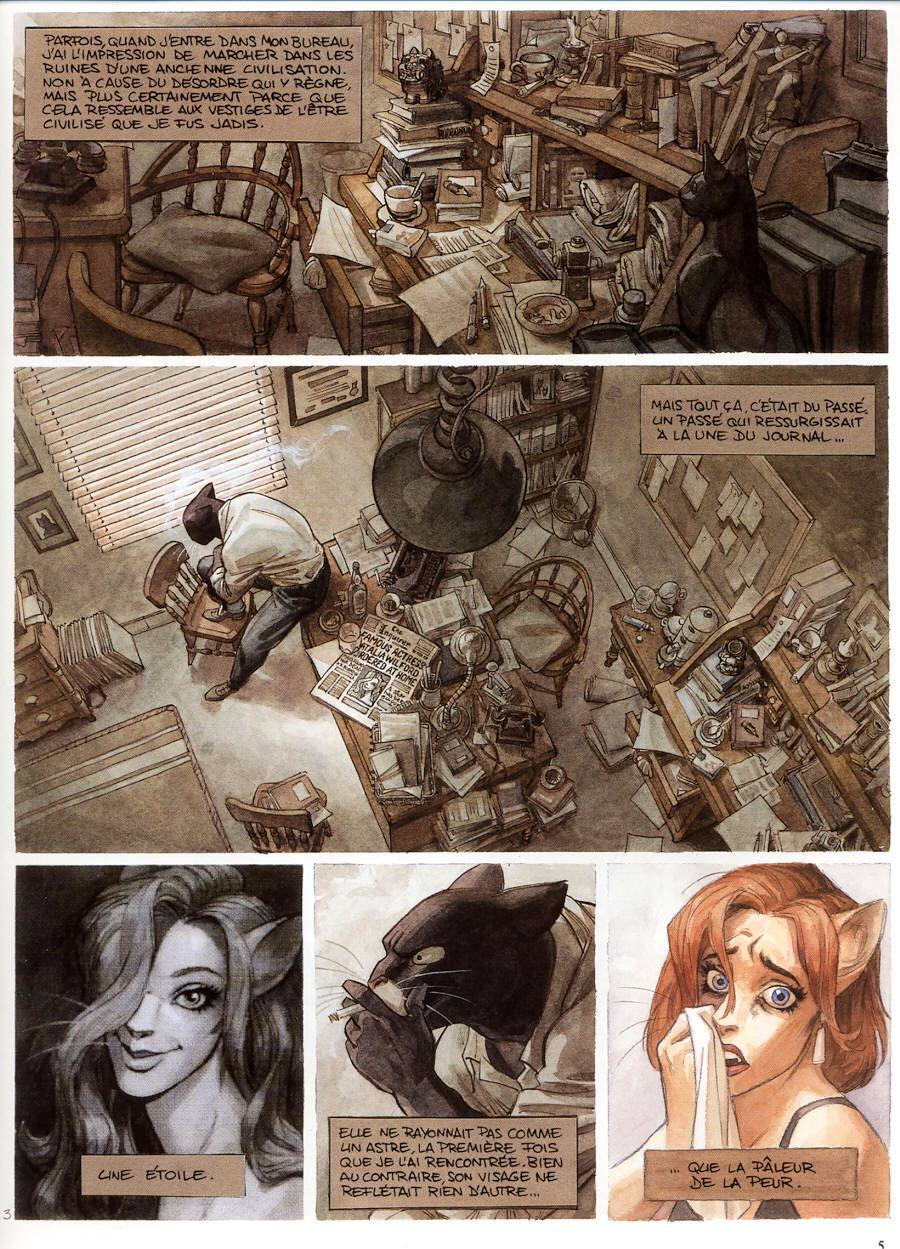 The level of detail is stunning and appropriate. The palette is precise and reinforces the mood, which ranges from gripping to hilarious to tragic.
In short, this work is beautiful in very sense, even when it's recounting ugly events. The trappings of noir, or what the casual student thinks of as noir (I'm a bit more than casual, but still a student) are all here. The femmes fatale, the levels of fear, greed and corruption, the broken hearts, the sense of unrelenting desperation. There are also some odd male bonds- not so odd as in the classic Gilda, but Blacksad's repulsion/friendship with the reporter Weekly is a rather odd but serviceable bond.
Blacksad is very much a loner, though. His friendships are tenuous at best, and as in the final tale, Red Soul, making its first US appearance in this volume. This story deals with Communism, blacklisting, and unanticipated betrayals. 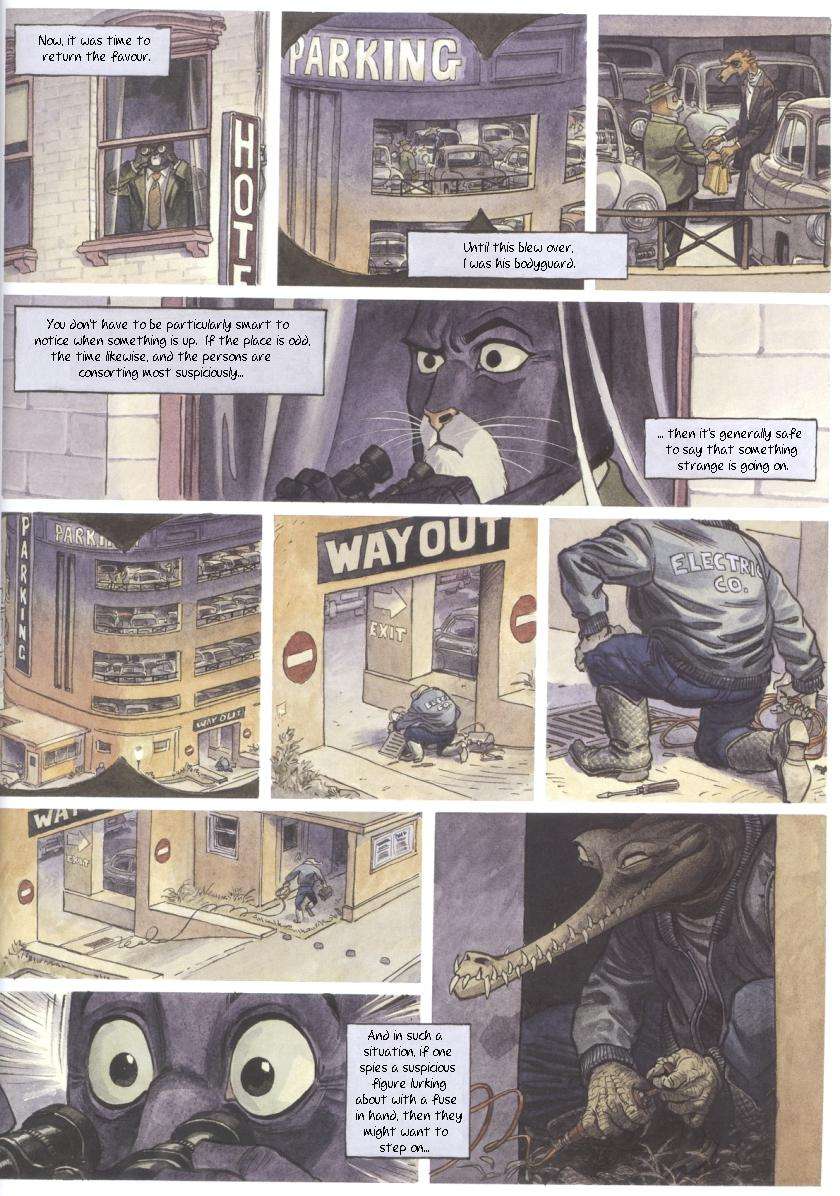 That's the final story in this volume. The first, Somewhere Within the Shadows, is an eloquent noir with the traditional trappings, skillfully handled. The middle story, Arctic Nation, plays up the animal aspect by using polar bears as white supremacists a la the KKK. 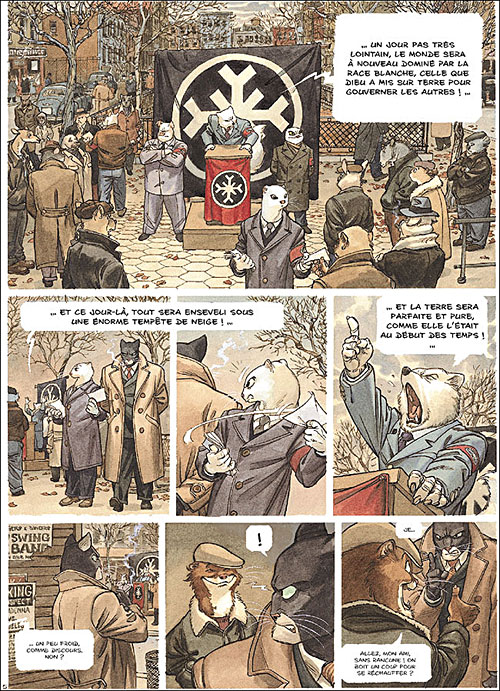 The use of the stylized snowflake as stand-in for the KKK cross is brilliant.
There's one aspect of noir that I question in this book.
Common wisdom on noir holds that there are no heroes, only villains, victims and survivors. And the character who has the best-defined moral code and lives up to it despite damning evidecne of the pointlessness of doing so is the closest we come to a hero.
Well, in reading this, I can't help thinking that Blacksad is a hero, and that's all there is to it.
So is it still noir? In most ways, yes. But no matter. It's a damn good comic, no matter how it's classified.
I'm pleased to note that the creators have two more volumes of bandes desinee coming out. Dark Horse, are you paying attention? 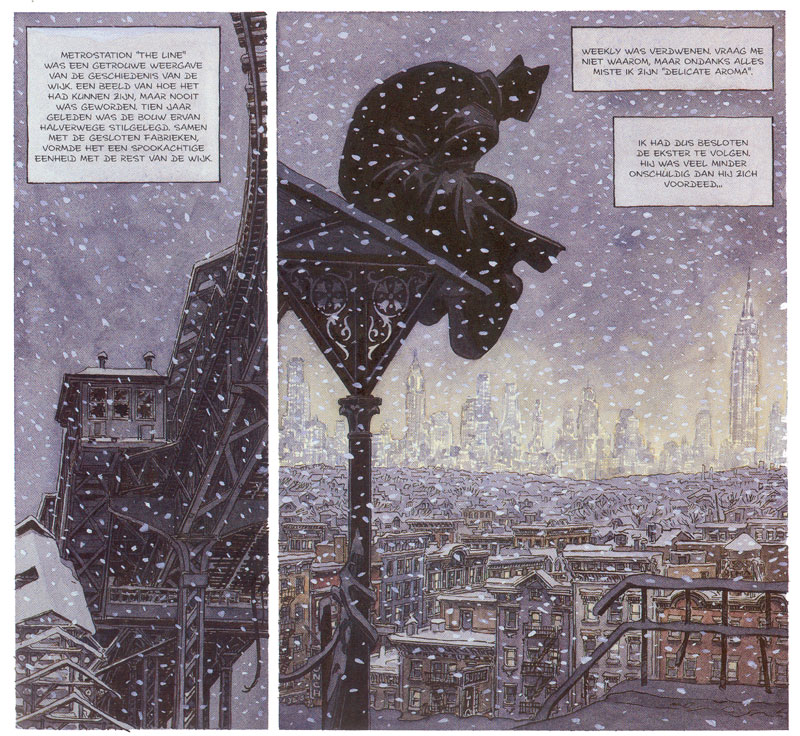