Before I teach my Comic Book Writing class tonight, I wanted to update the blog. I've had some decent scanning time, at last!
Here are the next two pages of Speedy Recovery and His All-Girl Orchestra. 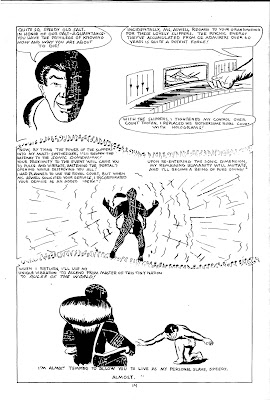 This page is the text dump. The back story is explained, and the villain's master plan is revealed.
When doing this kind of page, it's important to keep it visually interesting. The top tier deals with the reality of the situation. The second and third tiers are visualizations of the plan, images that support the text. They're also the character's imagination, so quotation marks are used rather than word balloons, though it's still just Toby talking.
The page has curved panel borders, formed by rolling notes. That rolling rubber stamp was just what I needed to make this story what I wanted!
Sidebar: rubber stamps are cool. In the mid-70s, experimental filmmaker Ken Brown did a short done entirely with rubber stamps, called STAMPEDE. I searched for it online, but came a cropper. Brown is still very active, and occasionally there's a retrospective of his film work.
Ahem. Back to the issue at hand.
Info dump is tricky. How much is too much? In general, it's a good idea to treat text blocks like word balloons. Old school comic writing held that no word balloon should exceed a word count of 30. Let's look at that:
Toby, panel 1: 25 words
Toby (offscreen), panel 2: two balloons, 27 words and 18 words.
Teir 2, sonic explosion text: two captions, 62 words and 18 words.
Bottom tier, ruler of the world fantasy: two captions, 21 words and 13 words.
Clearly , the most problematic is the first caption on the center tier. In retrospect, it would have been better to break that up in thirds. The places for the text breaks are obvious- the ends of each sentence- but that poses some layout challenges if the image is still to read uninterrupted. 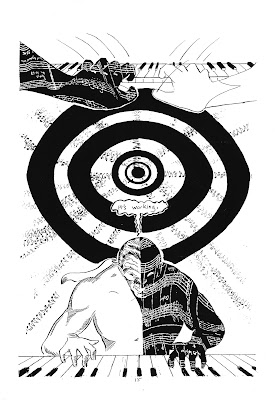 On to the next page.
This page requires almost no text. It's just Toby Continued putting the last steps of his mad plan into action. Visually, I wanted the POV of his hands hitting the keyboards followed by a reverse shot of him in action. The intent of the "eye ellipses" was to show the dimensional portal mentioned on the previous page starting to open. I'm not sure how well it works visually. If the notes emanating from it increased in size as they did so, it might have been more visually clear.
The music in Toby's body was fun to do. I took some of my favorite sheet music, twisted it around on a Xerox, scanned and reversed it, then used a light table to find shapes that matched the form needed. Then it was on to the light table with the x-acto knife, followed by some glue stick work! By finding pieces that echoed the form, I added to the dimensionality of that form.
Was there a faster way to do it? Maybe. But as with the rocks, I wanted to do as much hand work as possible. As Charles Schulz said when asked why he didn't use assistants on Peanuts, I don't want to give up that much fun!
Next: more Speedy, as events build to a crisis.