Okay, this one needs a bit of background for any neophytes.
In 1966, writer Dave Wood, who also co-created Challengers of the Unknown, co-created a new feature in House of Mystery. It involved a boy named Robby Reed, who used an old school telephone dial (no phone, just the dial). By dialing H-E-R-O,  he transformed into a random superhero.
Here's an example of one of his transformations.

And let us not forget his "cuss word", "sockamagee!"
The original storyline ran through 17 issues of insipred silliness, with a couple of random appearances by the character in the 1970s.
The stories were silly fun, fairly imaginative 1960s superhero fare.
One of Robby's transformations was to the classic version of Plastic Man, who had been neglected in comics for many years at that point.
There was a revival of the character in the 1980s, covering eleven issues of Adventure Comics (a title that never should have been canceled).
A couple more spot appearances, then nothing until 2003.
The 2003 H.E.R.O.  series ran for 22 issues. Here the focus was on the dial itself, and its effect on those who used it, reminiscent of the interaction of the Helmet of Nabu and those who become Dr. Fate by wearing it.
This brings us to the current series, Dial H, written by SF writer China Mieville and illustrated by Mateus Santolucco.
Meiville is a scary talented writer. I loved his dense, poetic novel The City and the City, and I'm embarrassed to say I've yet to read his multiple award winner and nominee Perdido Street Station. Meiville is also so politically active and aware he makes me look like a conservative. Scary, that.
His work here is a bit of a departure in some ways. 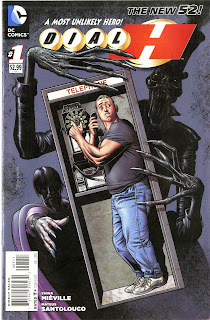 The story follows the original model: unwitting guy, attempting save his friend from a beating, accidentally dials H-E-R-O, this time in a deserted and ramshackle phone booth, and transforms into a superhero.
This time, the guy is a down on his luck middle-aged slob, jobless, hopelessly obese and depressed, and alone save one friend who's just about had it with him.
Meiville's story is infused with acerbic wit. Now ordinarily I'm not a big fan of snark (unless, of course, it's my snark). But it's to Meiville's credit as a writer that the characters retain their humanity and that we can and do still care about them in the midst of this silliness.
The book maintains genuine excitement and tension in the midst of the silliness. One need only watch the classic Abbot and Costello Meet Frankenstein to see how this is possible. The central plot involves an adversary, Ex Nihilo, who is putting people into comas as part and parcel of an inter-dimensional plot.
Here's a sampling of issue 1's adventure and absurdity. 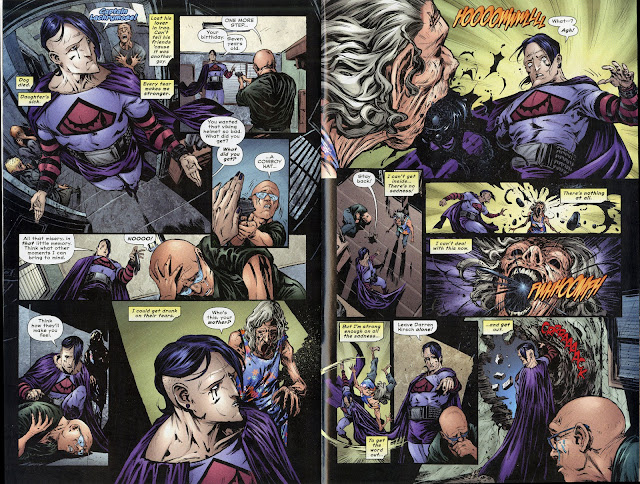 Santolo's art serves the story very well. His imaginative character design is crucial to the story and particularly noteworthy. Part of a wave of talent from Brazil that both Marvel and DC/ Vertigo have used to great effect in recent years (think daytripper, the current Justice League and Green Lantern), this is quite welcome, and reminiscent of the influx of Filipino artists in the 1970s.
This is part of the "second wave" of DC's New 52- a bit disingenuous in my mind. If it's still "new", how can it already have a second wave?
The first issue sold just over 45,000, a little more than half of Batman's current sales averages. Following the current belief that single issue sales are merely loss leaders for TPBs (the first volume of Dial H, titled Into You, is due out in April 2013), the figure is acceptable, and the book seems to be holding its own.
I do have concerns about marketing. After all, there's no central hero costume to sell, and the merchandising? Toy phone dials in the second decade of the 21st century? I don't think so! Can't really use the phone booth itself, it's sort of been done.