Supposedly concluding Volume III of Alan Moore's League of Extraordinary Gentlemen (hereafter referred to as LOEG to save my fingers), Century 2009 deals with the remnants of the League enlisted by the time-wandering Norton to stop the birth of the Antichrist. Failing that, they are charged with stopping the Apocalypse itself.
When Moore began this series of serieses (serieses?), he created a charming and occasionally perverse yet witty pastiche of pop culture and literature references. Most of these were of British origin, but there was great fun to be had in decoding all his subtle (and less so) allusions and applying meaning to them, all while riding the high adventure merry go round.
The first story involved Allan Quatermain, Mina Harker, the Invisible Man, Captain Nemo and Mr. Hyde in an uneasy alliance to save England from a fiendish plot involving Moriarty and the denizens of Fu Manchu. H.G. Wells' cavorite puts in an appearance, as do Holmes and his brother. Rollicking good fun infused with wit, sex, opium addiction and smart writing.
This is the one upon which the film was ostensibly based. The film was lacking in the views of many. There are aspects of it I find enjoyable. The introduction of Dorian Gray seemed superfluous. The character of Tom Sawyer, despite being wholly out of place, is well written and acted. And the painting showing an earlier League including my childhood favorite, Dr. Syn, the Scarecrow of Romney Marsh, is too cool for words. The painting appears in a different form in the original text.


Book II is my favorite of the series so far. Herein Griffin, the Invisible Man, colludes with invading Martians until the rest of the League intervenes. This affords Moore the opportunity to give the reader tastes of John Carter, Gullivar Jones, H.G. Wells' Martians, and a vicious yet extremely pragmatic sendup of Teddy Ruxpin by way of Dr. Moreau.

During this outing, two League members die, one at the hands (well, not hands really, a bit closer to home) of a teammate, the other in an orgy of brutality taking down some of the Martian adversaries.
As a transitional device, this is followed by The Black Dossier, which propels our Victorians, or what's left of them, to 1959. Here's the stuff of spies and Cold Wars, coupled with Orwell and Tijuana Bibles. Herein James Bond is shown as the insufferable twit I always thought he was in the films (though I rather liked the few Bond books I read).
In the midst of it all, our team (now a trio of Quatermain, Harker and Orlando, all immortal by now) enters the Blazing World of magic and a deeper view of reality, and suddenly the heroics and cultural pastiches are in a time share with Moore's bent for mysticism.
This is followed by the Century trilogy, of which the final (?) volume appeared in 2012. Cultural and literary references still leap about- Brecht, more Jules Verne, Brit SF comic strips, punk rock, psychedelia, and Alesteir Crowley, to run the short list.
The trilogy bogs down a bit in the 1969 volume, as the Magic gets a bit obscure (but makes sense on careful reading). But its conclusion, spotlighted by the deftly handled death of Alan Quatermain, is both noble and tragic. The Judeo-Christian God is seen as a Mary Poppins pastiche walking through the sky and dealing directly with the childlike Antichrist. The whole thing echoes and mourns the demise of a society of wonder, epitomized in the scene of a rusting Martian shell, ignored by almost everyone. 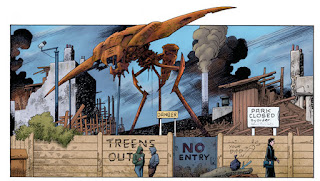 The death of Quatermain is most significant. It requires a hero to overcome his most dreaded demons, to make the decision to be alive rather than simply living, even if the price is death. Although his death by electrified mystic urine is, shall we say, less than dignified, it requires the hero to be honest about the thing that defeats most heroes- the truth of their own lives. IN the name of love, Quatermain faces evil, deciding to chance dying to finally live on the right terms- "you read about me when you were a little girl and that's who I am. I'm not this fucking mess. That's not how I want to go out. I'm somebody good."
God has a great speech too.
But we are left with shards of the League, and tentatively a new member.

Though this is supposed to conclude the trilogy, there are allusions to more stories in the text, and Alan Moore has promised some one off stories, beginning with LOEG: Nemo this March. Ostensibly this will fill in bit of the legend of the compelling Captain Nemo and his heirs. The cover implies his daughter, who assumes command of the Nautilus in Century 1910, though we may learn more of the grandson, in command in Century 2009.
O'Neill's art is much like the series itself. It varies from crude and vulgar to elegantly profound. There's a verve to it that's compelling even when illustrating crude content, which is often. There's addiction, messy sex between a great many people, distortions of the human form, and all manner of body functions accompanying the literature and culture lessons and all the daring do.
LOEG leaves me frustrated, challenged, intrigued, bemused, angered, entertained and ultimately satisfied.
Comics could do, and have done, worse.
Tomorrow: Best of 2012 number nine: if you can see it.
on January 05, 2013 No comments: