This Saturday is Read Comics in Public Day! It's also Jack Kirby's birthday, which is no coincidence. 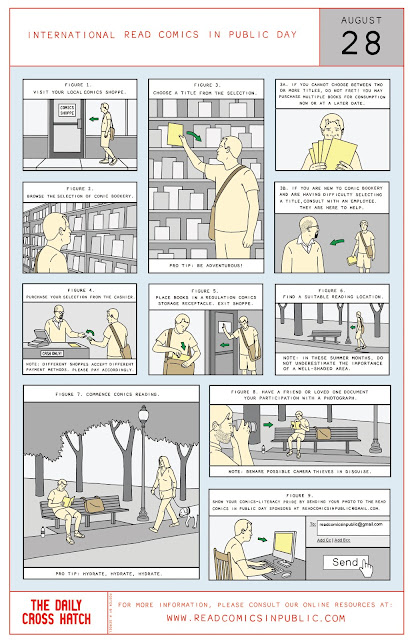 This event is one of those groundswell things. Since comic readers have historically been perceived as  less than literate, despite the posturings of the Simpsons' Comic Book Guy, who now has his own comic book, this event could be an opportunity to dispel preconceived notions about comic readers. We're not semi-literate slobs or social misfits. We're just people who love to read- an increasing rarity. According to the American Booksellers' Association, book sales are paradoxical. While people are ostensibly buying more books, independent stores are closing, and there's no evidence that people are reading the books they buy. Nor do the figures note what types of books are being sold. The largest sellers remain cookbooks and the Bible.
Bottom line is that, according to the US Census Bureau statistics, April 2010 book sales of $917 million are at their lowest level in 8 years.
And comic book stores are not immune from this disturbing trend, as evidenced by the recent closing of one owned by filmmaker and comic lover Kevin Smith, and by the closing of the great Forbidden Planet in England.
Eau Claire Comics and Collectibles, in Eau Claire, WI, the first store to sell my work, is also gone.
We are blessed here in the Twin Cities to have a comics community that supports no less than a dozen comic stores, but I fear for their future as well.
Possibly that's a sad but realistic outcome.
The economy is either improving slowly or doomed, depending on what the economic seers had for breakfast. Unemployment appears to have leveled off around 10% and may or may not rebound. That leaves many people with little, if any, disposable income.
So if we are in an inverted Maslow model, where the hierarchy of needs is worked down to the basics rather than up to self-actualization, I fear that books and comics will not be very high up most people's lists of necessary purchases, at least for a while.
And as is the case with any art form, continued involvement is crucial to comics' thriving.
We've overcome much of the 30s - 60s stigma about comics, partially due to the snobbery associated with the "graphic novel", but we need to be visible. We need to be seen loving our comics, proudly.
Hey, if it's good enough for Bogey, it's good enough for us!