Well, as the song says, another year older and a new one just begun.
So let's begin our annual countdown of the best comics of 2014.
Curmudgeonly disclaimer: I do these one a day for two weeks, rather than all at once as most folks do. I also wait until the year has actually ended to begin posting them. I mean really, how can you encapsulate something that hasn't ended yet?
That said, here we go.
Number 14 on the list is a book I've taught several times in Comic Book History class, Alan Moore's Miracleman: A Dream of Flying. Together with Watchmen, Miracleman sums up Moore's take on superheroes in the real world: they would either be hunted to extinction, or if they survived the hunt, they'd create an enforced utopia.
Miracleman is the latter story. 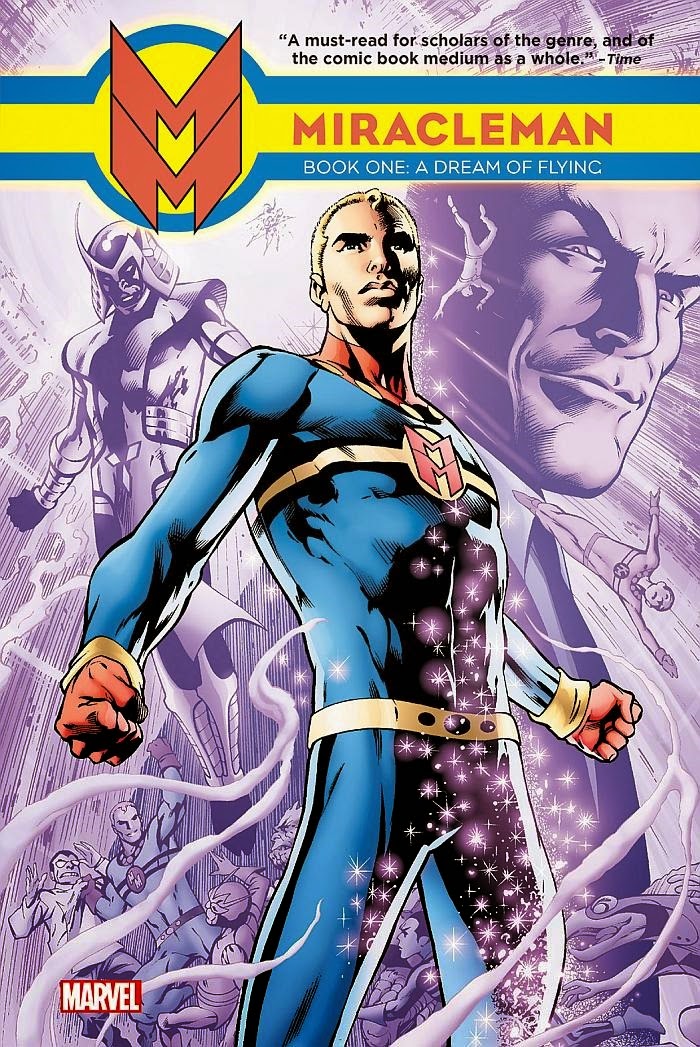 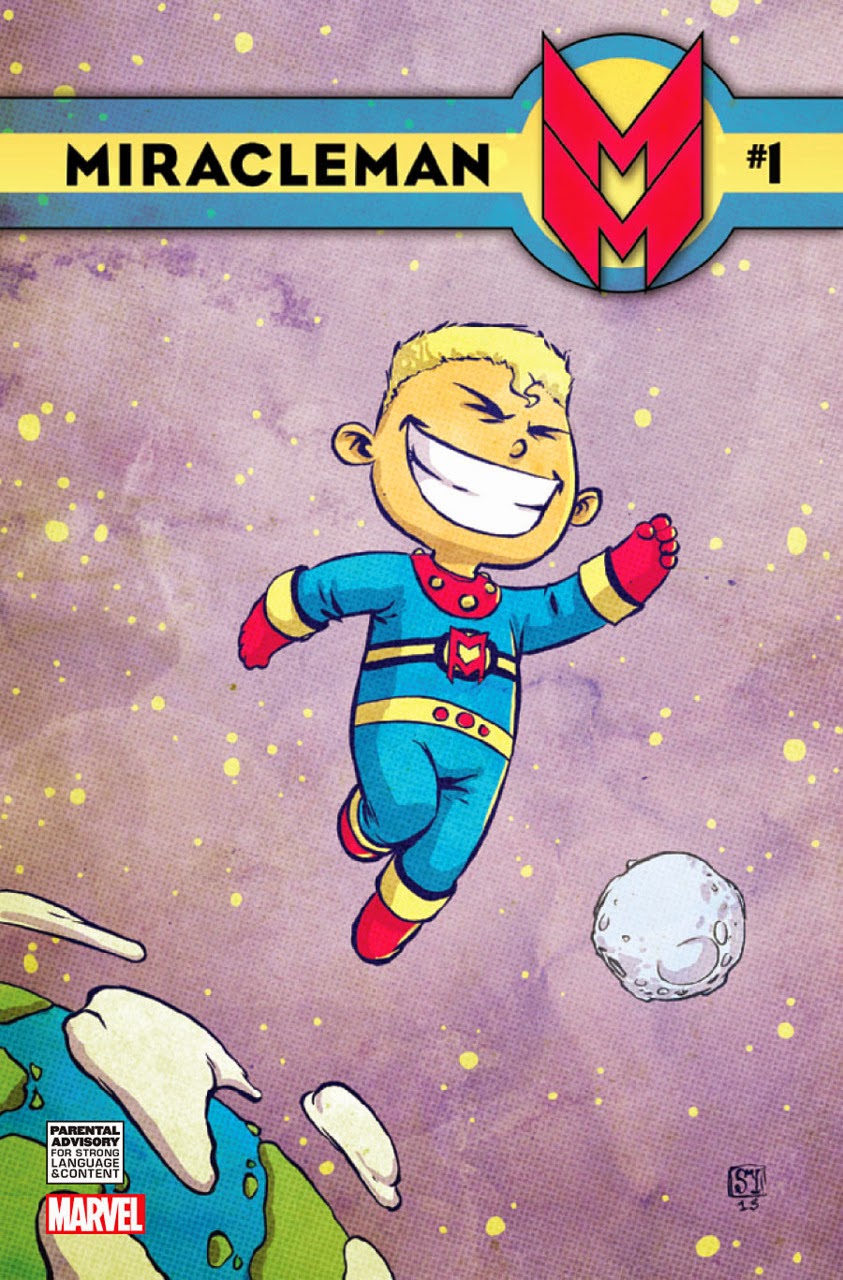 This Marvel reprint of the legendary Alan Moore meditation on the superhero is long overdue, but not lacking in problems. The classic tale of Michael Moran, who becomes Miracleman and eventually creates an enforced utopia (before you start wailing about spoilers, come on now, this book has been around online for over 30 years- anybody who hasn't read it hasn't been trying) is given a serviceable treatment at worst and a stellar treatment at best by Quesada and Company. I find the politics of the matter chafing. Marvel has had the rights to this for years now, and has been milking it with reprints of the Mick Anglo late 50s/early 60s British material, which, while fun and highly inventive in its way, is basically watered down C.C. Beck Captain Marvel.Then Marvel does the annoying multiple covers thing. Some of the covers, like this playful one by Skottie Young, are spot on! This book should be exciting above all else. Granted, some of Moore's strongest ideas on the superhero are within these pages, but still, exciting fun first! 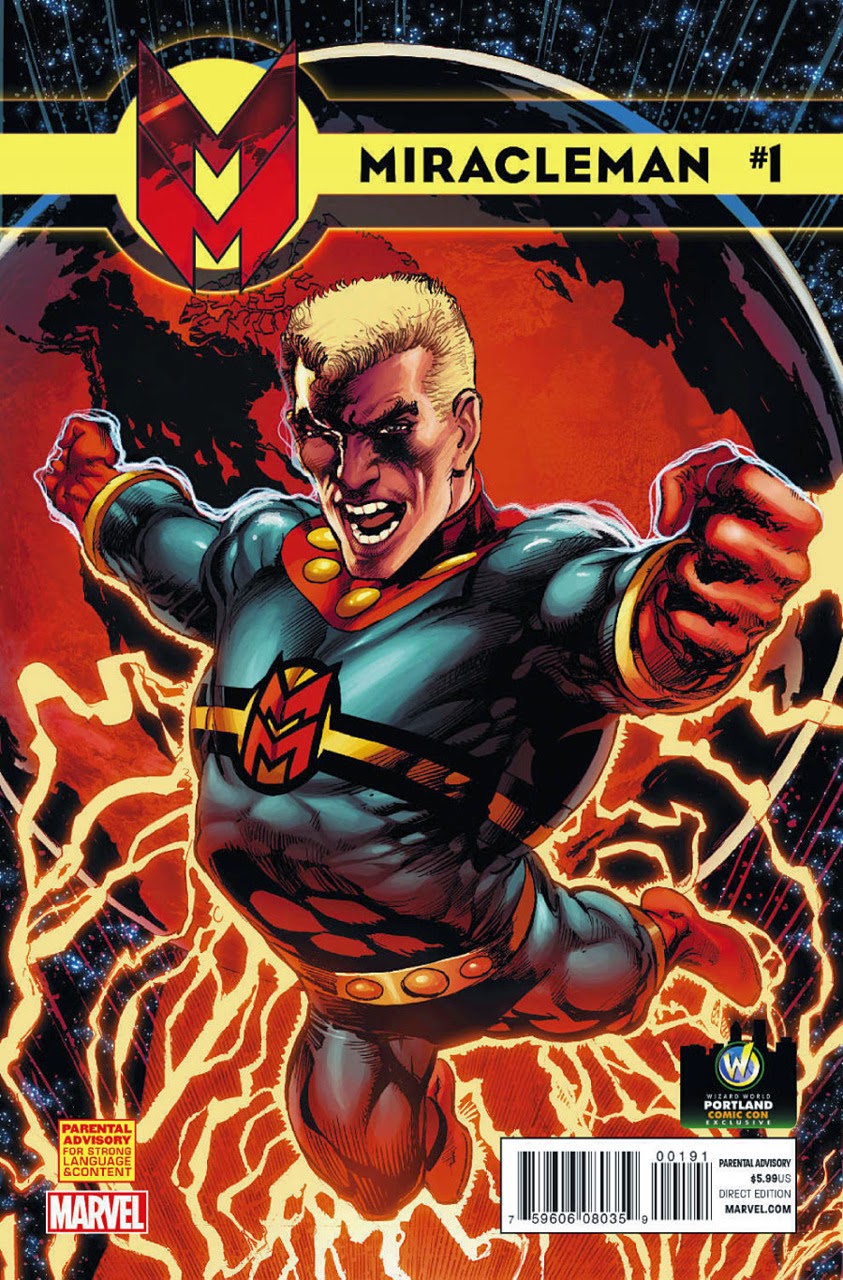 But others, like this Neal Adams cover, are just the wrong tone for the series, making it seem like just another superhero book.
And all the gimmicks of multiple covers, coupled with the absurdity of the writing credit to "the original writer"- well, it just chafes. Better to leave off the writing credits entirely than to indulge in that backhanded, feeble attempt to pick at the open wound that is Alan Moore's war on reprinting his past work. Come on, just do as Zack Snyder did in the embarrassing Watchmen film- just credit the artist as the creator and be done with it.
But that's got nothing to do with the contents. The story stands up quite well, these decades later. And while I don't care much for the new coloring, the printing is better. Perhaps it's the nostalgic aspect that gets to me. I like to see this on dimmer paper, despite the storytelling benefiting (sometimes) from the crisper printing.
In fairness, there are moments where the new colors are strikingly effective, as is the case in the first page of the narrative proper: 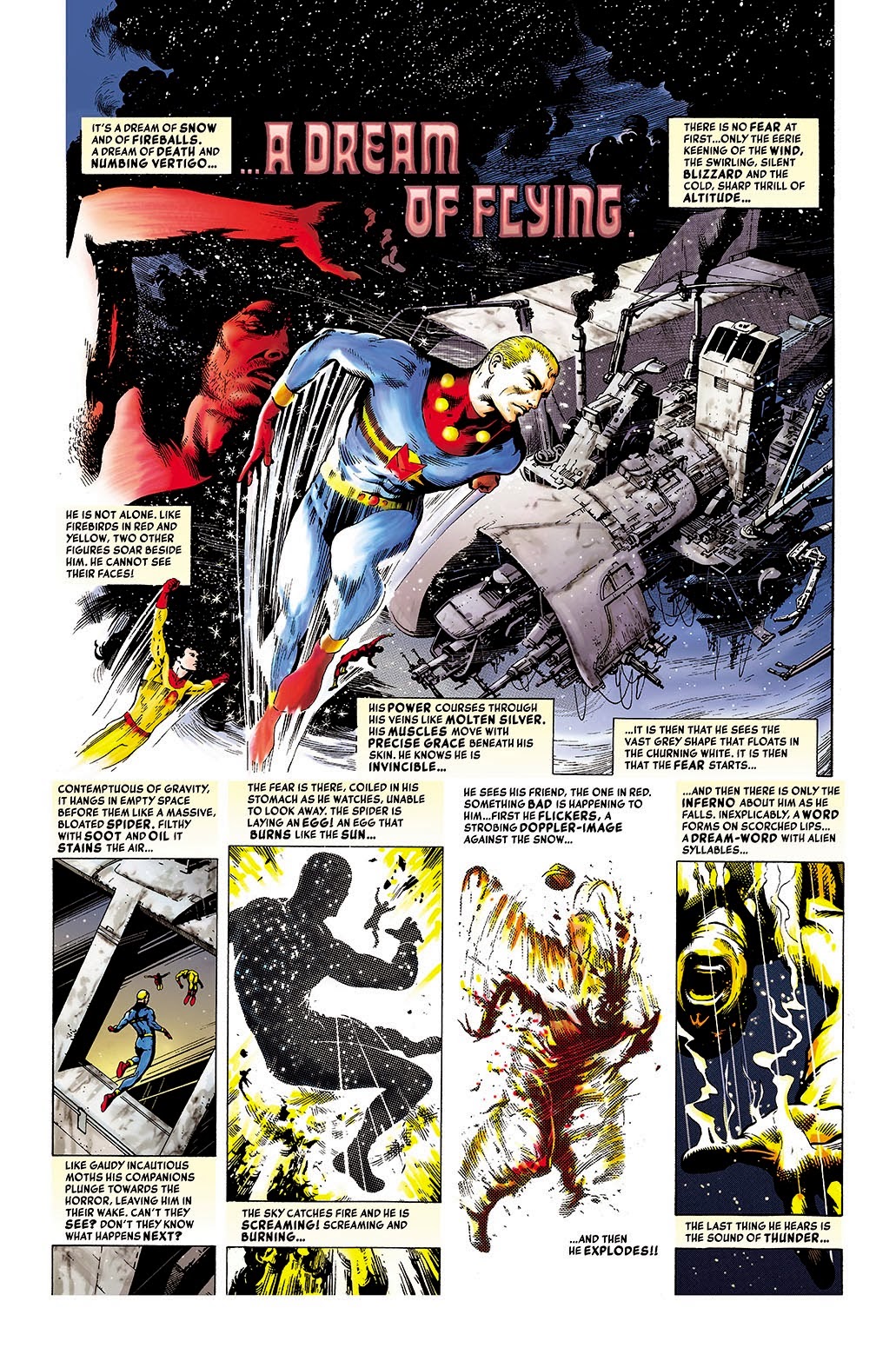 A very mixed bag. Kudos to Marvel for reprinting The Yesterday Gambit, the story from the original Warrior (UK SF comics magazine where the character first appeared as Marvelman) run not reprinted by Eclipse in the 80s, but frustration at their placement of the story in the wrong place, both in reprint order and in the narrative. Also, with no color guides to work from, Marvel did a rather shoddy job coloring this story, in my less than humble opinion.
But much of this is more about presentation than about the work itself. Marvel has wisely made few, if any, editorial alterations to the source texts, and the story stands on its own merits, even with Marvel brashly boasting about the wonders of all the extras in the collected edition. At least they did that after the story proper, so if these come out in TPB, there will be an opportunity to cut that material from them all, move it to the back and re-bind the books in a more proper form.
And I eagerly await the unpublished Neil Gaiman issues, probably to be printed after the original 23 issue run is reprinted. There's also a new Miracleman Annual out December 31, which I've not yet had a chance to read.
Hope springs eternal.
Tomorrow: No. 13 of the best of 2014 fades in.... 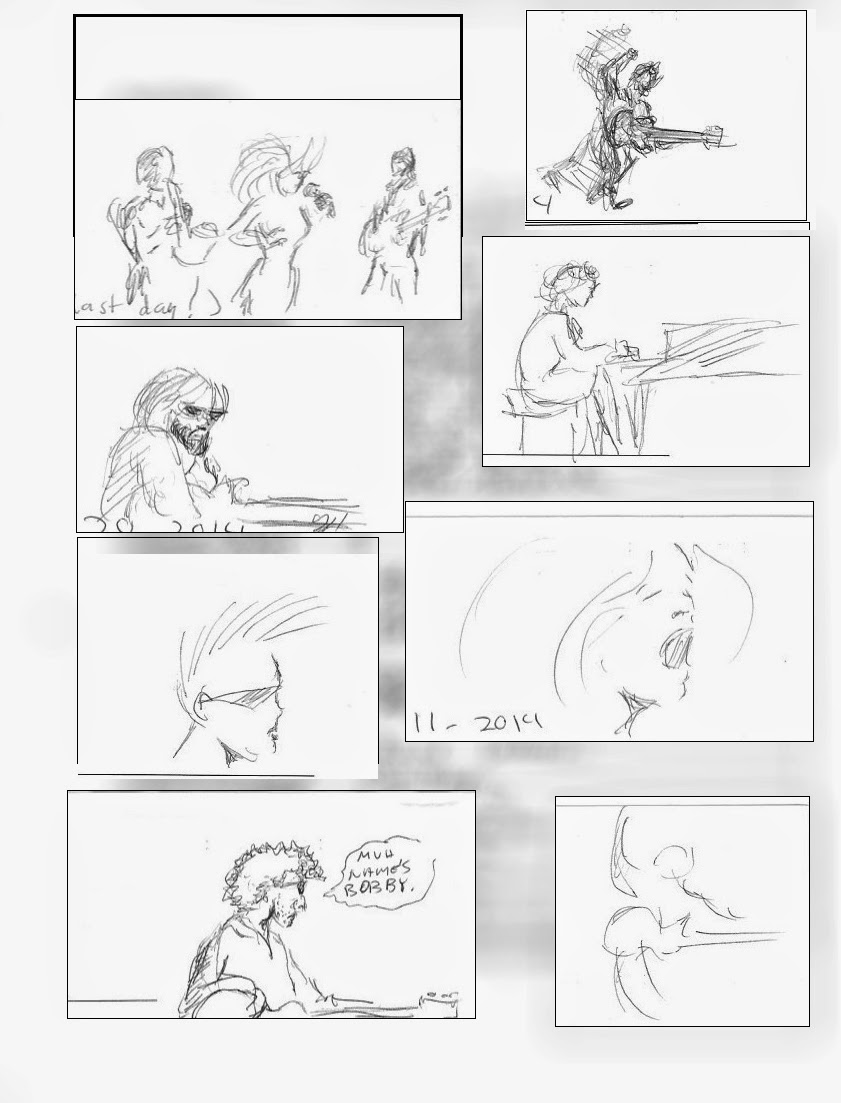 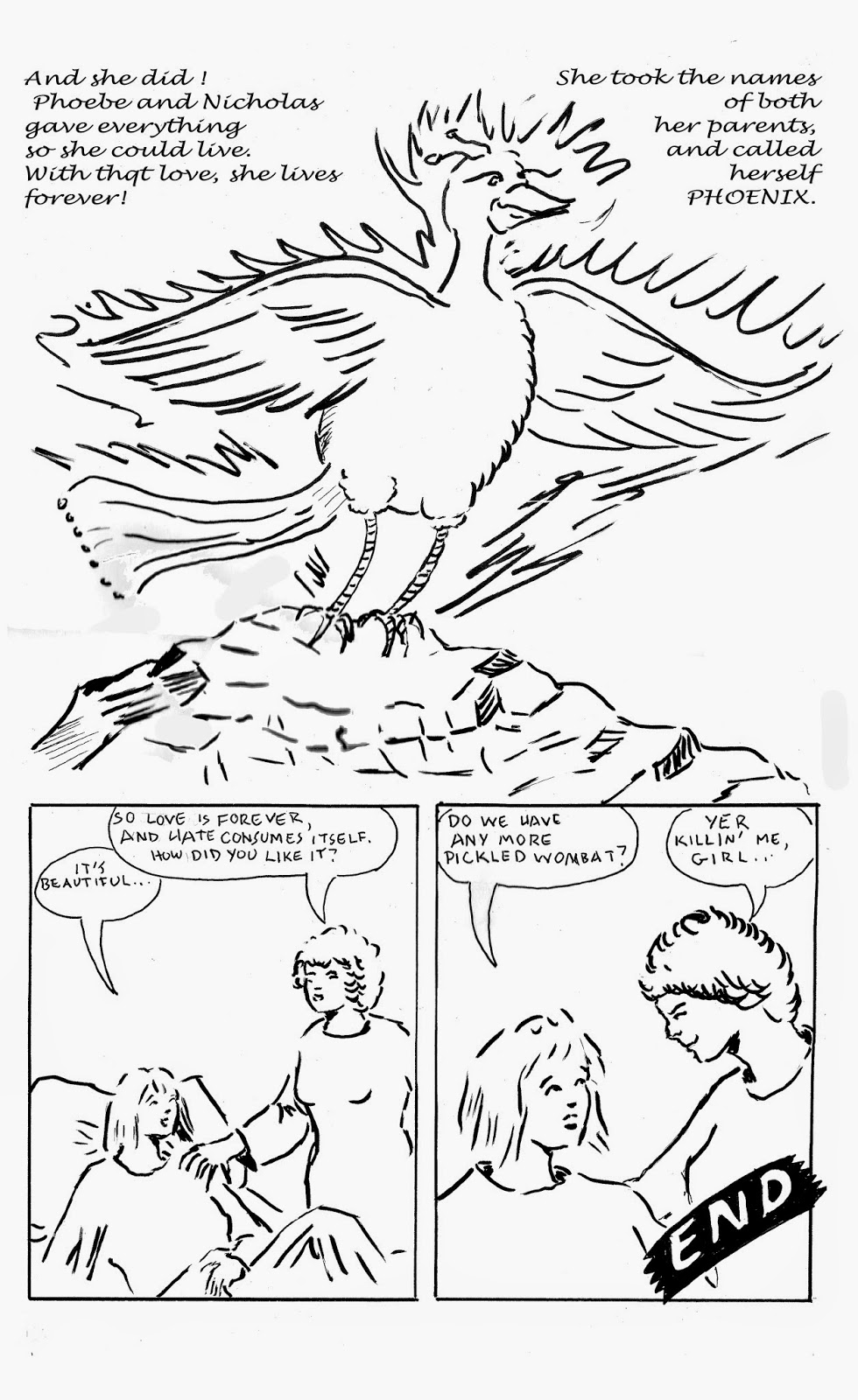 This was done by Sunday, but with classes ending today, I haven't had time to post.
The next page of the story is done, concluding the tale, and the final page will post on Sunday, December 21.
Here we go: 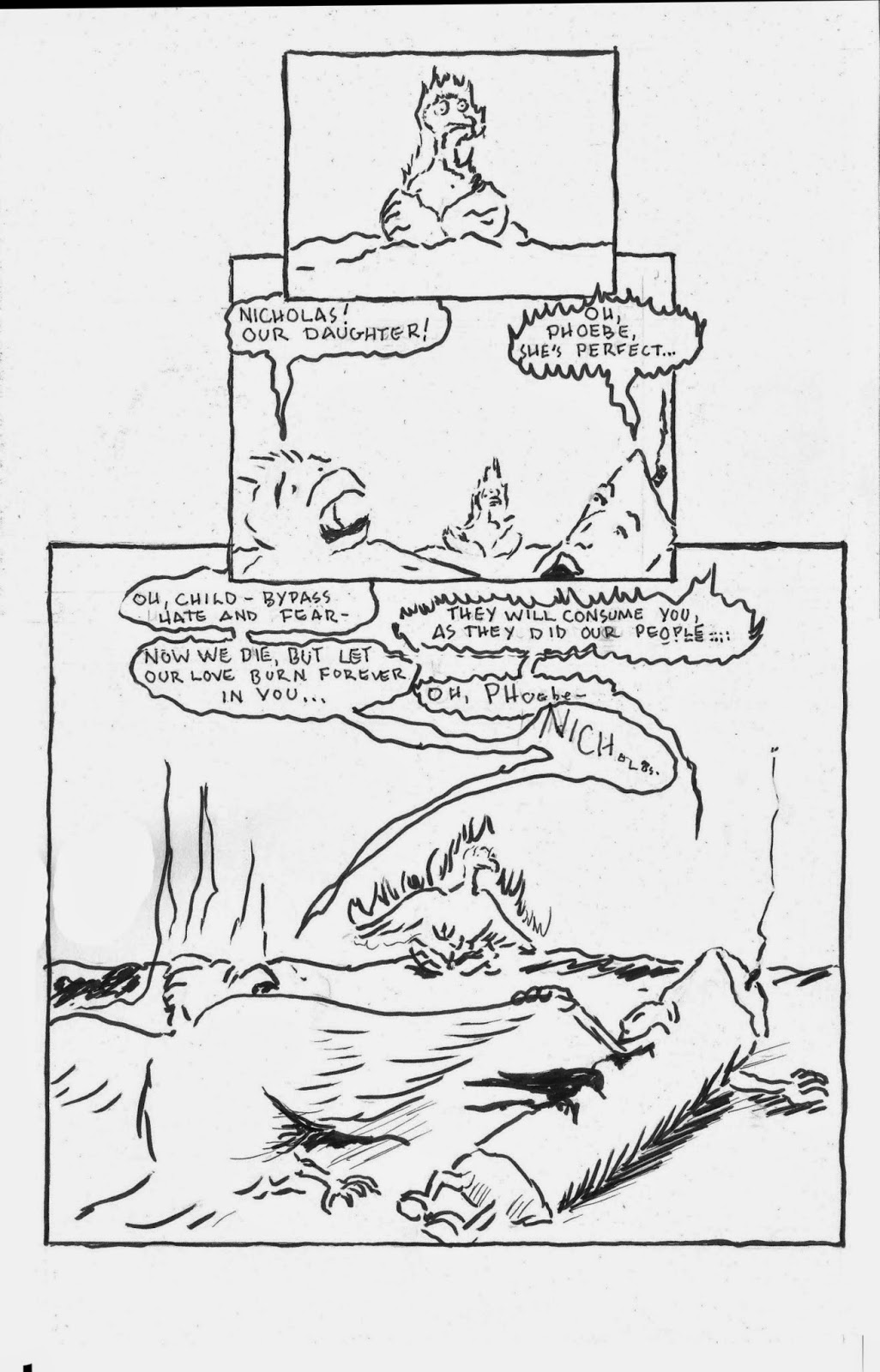 This layout is exactly what I wanted. In terms of the figures, I fudged a bit to get them laying down next to each other and still looking at the child. Also, the placement of the "dying names" word balloons was crucial.
Debated whether Phoebe and Nicholas' speeches were over the top, but when you're dying and have something to say, you just say it.
Sunday: the conclusion of this story.

Done on time, posting a day late. Still working too much! Getting the story done anyway. 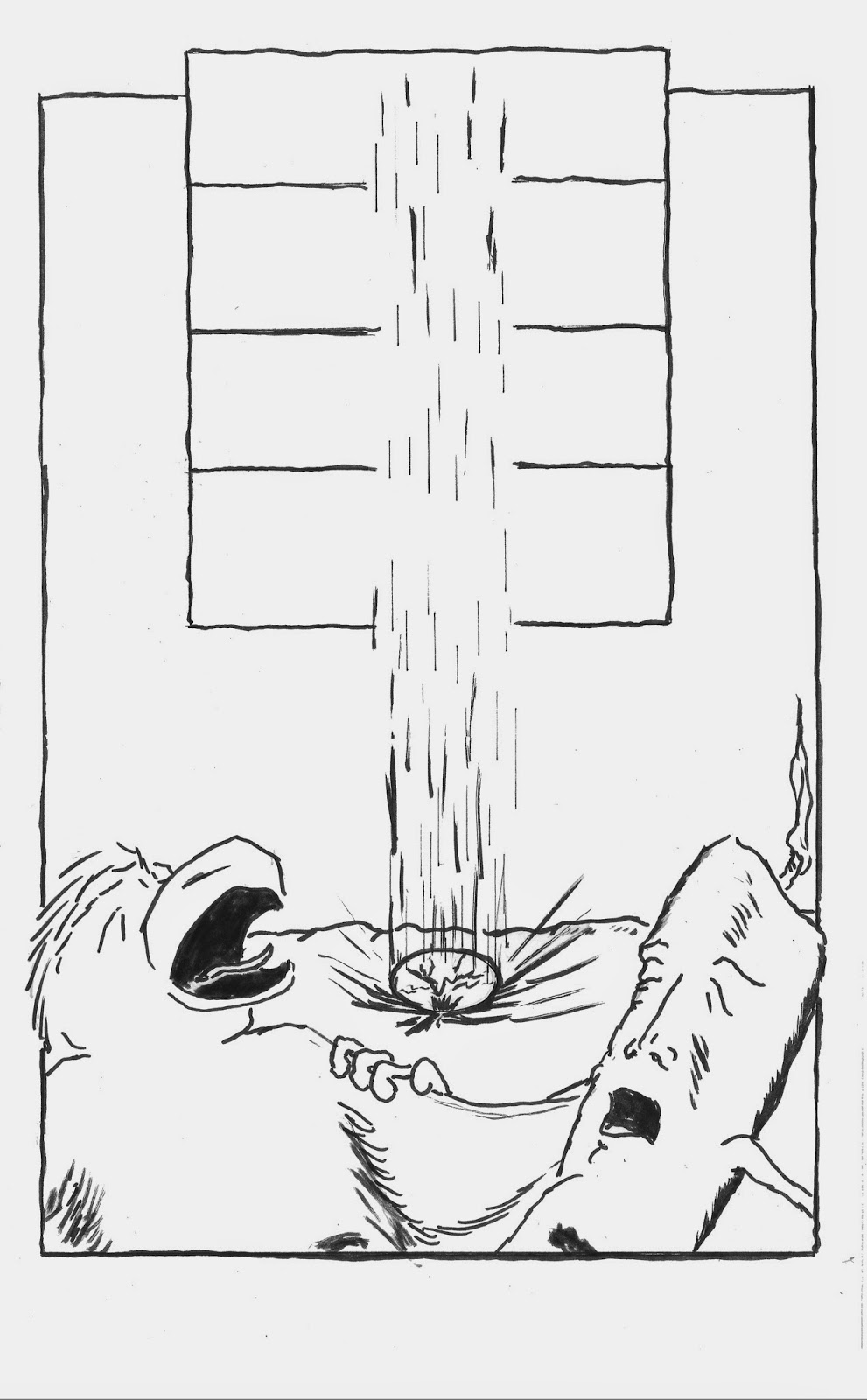 Very simple, fast page. The intent is that the closed broken set of panels framed by the splash slow the time of the egg falling.
Phoebe's face can be seen either as a death mask expression or her staring in horror at the fallen egg. While the original intent was the former, I elected to leave it ambiguous, rather than adding a  few lines to clarify.
One, possibly two pages left to this story. If my other plans are to be fruitful, this must be done this week.
on December 08, 2014 No comments: