Well, here we are, on schedule! 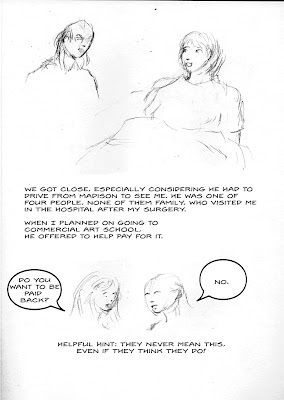 Had a great two days at Twin Cities Spring Con. I came home exhausted, but inspired, both by the con and by a concert I attended Saturday night (more on that later if appropriate).
I had a blank page on the board, and after resting for a bit, started drawing, based on the rough in the draft version of the work.
Here's the draft version.
It's legible, but the art is barely there. Many scan artifacts not removed, text layout is static, and those facial expressions- ouch!
I decided to stick with the pencil for the final version, for two reasons. First and foremost, the other pages in this section have been based in pencil, so I thought it might be jarring to switch media within a chapter. Such a switch does occur at the end, but that's a closure thing, and I think it works. We're 8 or 9 pages away from that yet, so some time remains to resolve the issue, if necessary.
8 or 9? I'm considering adding a page right before this one. This is a key event that built for five years, so a little more background on such matters could help clarify things.
Here's the (possibly) final version. 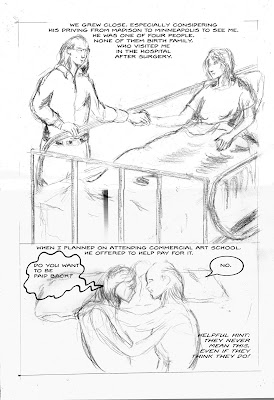 The text integrates more successfully with the image. I'm also trying to use the advice of that old Archie illustrator. Don't have your characters just standing wooden. Have their poses reflect action.
In the first panel, I've gone for greater emotional intimacy. The text says a lot of that. It was my moment of greatest triumph. I had accomplished one of the major goals of my life, possibly the most important one. And there was no acknowledgment from family (to be fair, my Mother did call).
I rendered the hospital bed from memory rather than reference. Since I work with them in my AIDS caregiver job, I'm pretty clear on the basic structures.
I'm rendering Curt pretty much the way he looked. After 5 years with someone,  you get to know their nooks and crannies. I think the loving/bedraggled look I gave my face in the first panel is just right.
The second panel is one of my favorites. Though I do love realistic rendering, the flowing lines of a loosely structured, almost gestural pair of figures is somehow emotionally satisfying. As I was writing this, I noticed that the figures form an ersatz heart shape, which was NOT my intention.
I made a conscious  decision to delete the white from the word balloons and let the pencils show through. I'm happy with that.
The only thing I wonder about on these pencil pages is weight. I don't push the blacks far enough when working in graphite.
I may rescan this. It retains a few more artifacts than I like, there's a slight disjoint where the two scans of the half pages don't match up, and there are some cloying shadow lines at the base of the page. I fret a bit about having to re-enter the type, but I could just copy and paste those parts of the image to the new file.
I still have large format scanner access at my other job, even though I don't have a summer contract, so it's just a question of better time management.
In general, the page works, but there's some fine print to address.
Materials used: Canson XL Recycled 90# Bristol, soft lead in holder, #4 solid lead stick, #4 solid lead pencil, Magic Rub erasers, HP Deskjet 1510 scanner, Photoshop cc 2015.
Next: page four of this story. I have a couple short pieces tickling the back of my brain, but I'd like to stick this story out.
on May 22, 2017 No comments: Links to this post