Original Art Sundays No, 229: The Next Sharp Invitation, p.1

This page comes right before last week's page. This is the beginning of Chapter 2 in The Sharp Invitation.
Read on. 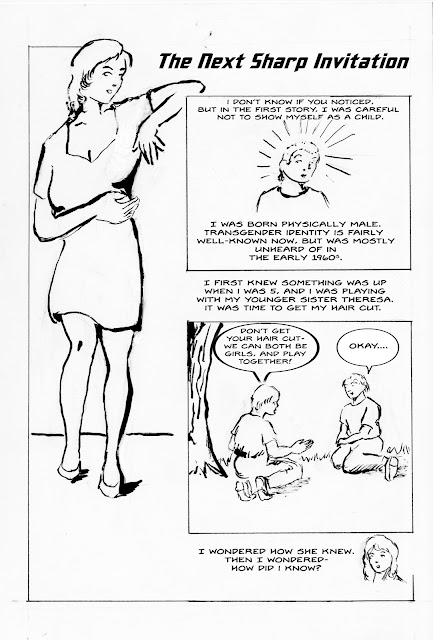 Strengths: I think the text is working well, and I'm fairly happy with the panel art. Drawing kids has never been my long suit, though I've done enough of it.
Weaknesses: I might rework the main figure. She's okay, but I'm not completely happy with the uneven line quality and proportions on the (reader) right side. It would be a pretty quick redraw, but I'm putting off reworks until more of the work is done.
Other technical matters: again lettering and word balloons in Photoshop, and I'm having some fun with it! There's loose hand lettering in pencil on the originals, which is erased in PS. I do save an unaltered original scan as a baseline in case of calamity.
Note to self: back these files up!
As I do more of this work, my fear of it both grows and subsides. Growth is due to the imminent completion of the work, and opening myself up to public scrutiny yet again. The fear subsides as I realize the work's slow completion, and the truth of the fear being at least in part groundless.
Next: more Sharp Invitations.
on March 27, 2016 No comments: Links to this post

Getting the hang of digital lettering, and using the balloon shapes I bought from Comicraft. I might get another set for variety, but these work for these basic pages.
I'm posting pages out of order as I complete them digitally from scans. I will post complete stories once the whole short story is posted. As mentioned last week, Sharp Invitations is a collection of short pieces that form a whole. This is page 2 of The Second Sharp Invitation, the second story in the book. 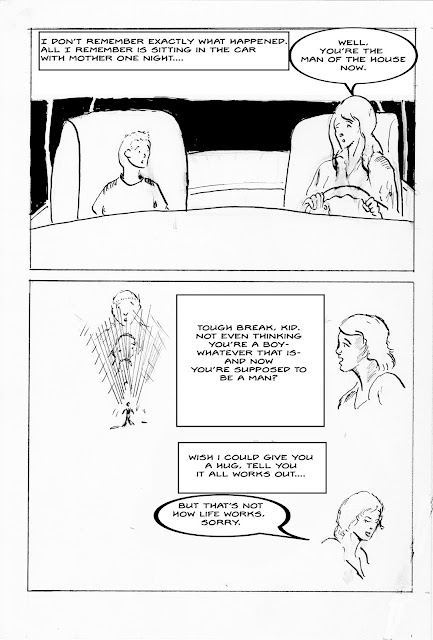 I've been working fast and sloppy. I don't mind the fast part, but I need to work tighter! My backgrounds remain sparse. While that's OK for some pages, I need some pages with significant amounts of detail.
I'm still working on a viable studio setup in the new place. I've been making it work, but it feels cramped. However, I'm reluctant to take time away from the work to rearrange my studio, with such a tight deadline (May 15!) looming.
Specs on this page: pen and ink on recycled Bristol board, digital lettering, balloons and text boxes. I'm pretty pleased with this one, though I might rework that left-facing profile shot in the lower panel if there's time.
I've been free-handing a lot of things like the holding line for the car dashboard in panel one, and I think I'll try to use my tools a bit more. The emotion of the work and the urgency of the deadline should not allow me to take short cuts, if those short cuts mean I need to rework panels or pages!
After a frustrating month of poking at this thing, I'm finally getting some momentum. Recognizing how huge the work is personally can be inhibiting, but it can also be liberating. More on that in upcoming weeks!
on March 23, 2016 No comments: Links to this post

After a three-month hiatus, I am resuming posting art.
I've hardly been idle. In addition to the full time gig and adjunct teaching, I've been stabbing at my grant project, a graphic memoir titled Sharp Invitations. This is a memoir focusing on transgender life and on issues of poverty. Also rock & roll!
This is the biggest project I've ever attempted, and I have a very tight deadline. I do not expect the version submitted for the grant fulfillment to be the final version. I hope to get this published, ideally by one of the big guns, Fantagraphics or First Second being my primary choices.
I am jumping around in the book rather than working sequentially. This is largely because the work is so intimate and emotional that I have a hard time sitting down to work one chapter all the way though. I posted a rough of the first chapter for this more than a year ago. Each chapter will be a self-contained story, with overlapping narratives.
Here's a mock-up of the cover. 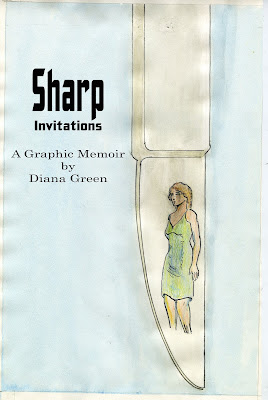 The basic layout will remain unchanged, but I might go for a more involved background than the pale blue watercolor wash. The core idea, the woman in the blade of the scalpel, will remain. I plan to do a more accurate rendering of the scalpel for the final. There's a curve to the handle, and a bevel at the start of the grip by the blade.
Materials: colored ink washes and colored pencil over inked line art. Typography done in Photoshop.
The body of the work goes much too slowly, but there is progress being made. I'm taking a week off of work in April to put the project to bed.
I currently have several pages that need to be lettered. I've committed to lettering this digitally and have included the purchase of two specific fonts in the grant proposal.
I will have more to report next week.
on March 15, 2016 No comments: Links to this post