I'm going to finish posting these all before moving on to something else. Putting Tranny Towers to bed will feel good, and it will be nice to give my faithful readers (if such there be) some continuity after a long and shoddy period of irregular output.
The strips we're getting into now come after the book submitted for the Xeric Grant, so they have not been reprinted since their original appearance. Please note that we are currently in the final grant cycle for comics!
This is scanned from a tear-sheet in Lavender magazine, known at the time as Lavender Lifestyles. I've done some light cleanup and re-sized the scan. I will rescan from the original before going to press, but this scan provides an unexpected opportunity to discuss a related issue (see below). 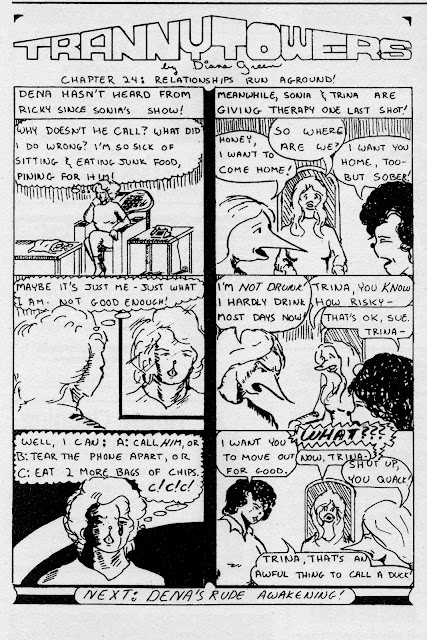 This page sets up what turned out to be the final two story arcs, with Dena's love life as the first story, and Trina's relationship coming next.
I like the masthead quite a bit, and there's a fair amount of story for such an introspective page.
As always, still a bit of work to do here, but it will serve until we go to press, yes?
Logistics issues: the dual-column narrative is not as effective as I hoped. I'll add a white divider down the meridian pre-press. The text needs re-lettering, particularly on the crowded central panel of column two. My font of choice for this remains Clean Cut Kid, purchased last year during the font sale at Comicraft for cheap. I like their stuff, but even on sale, it's usually a tad rich for my blood.
The other issue I alluded to above relates to the original printing of these strips.
Here's a full page scan of the original tear-sheet. I've blurred out the ads, but left the neighboring strip, The Wet Ones, which I rather liked, intact. 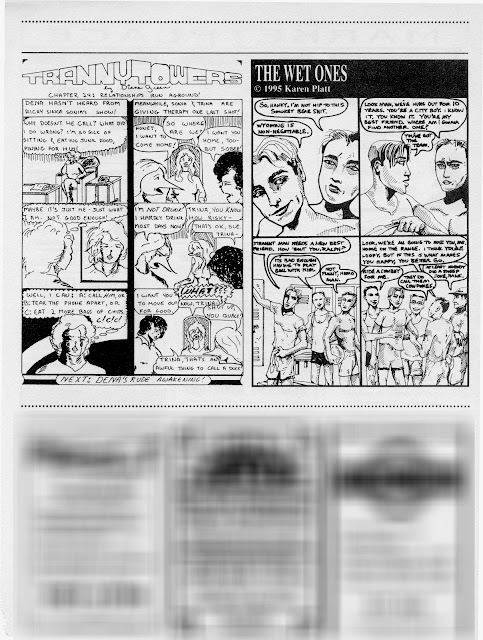 This is actually a  bit of an improvement from past print runs. The early strips ran at 1/4 of a printed page, roughly 8 1/2" x 11", so the strip occupied a space of roughly 2 3/4"  x 4 3/4 ". Around this time, the magazine was giving a full page to Alison Bechel's Dykes to Watch Out For. Now, I love Alison's work, always have, but come on. The other strips are crammed in like this?
Around this time I began asking for increased space. About six strips later, they increased my allotted space, but reformatted the strip without my knowledge or consent. After finally getting to talk in person with the designer, we settled on a new format that ran for the balance of the strip. That format begins about eight strips from now.
For purposes of completeness, I will show the reformatted strips along with their originals when we get to them.
Next Sunday: Tranny Towers, chapter 25.