Next page is done but not scanned. Will post tomorrow or Tuesday.
Just to stay on schedule, here's an inventory piece I've always liked! 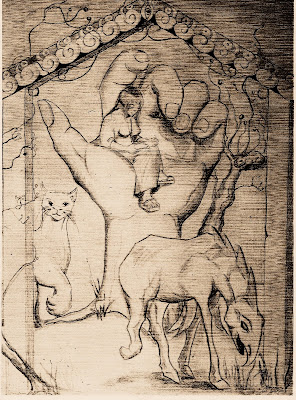 I've always enjoyed this piece. One of my most successful forays into what I've come to call meditative surrealism.
I used to think that the lady in hand was oblivious to her surroundings, but I've come to think that she accepts them contentedly!
Within 48 hours: A Private Myth, p. 7.
on February 28, 2010 No comments: Links to this post

Finally got the scan done!
Once again, issues with the relative depth of blacks from markers vs. ink. This time, I elected to just push all the grays into the black range.
I'm content with the results. Still working on a front end resolution to this issue. I love tech markers for the mechanical stuff- borders, geometric shapes, lettering- but I just dont' get the uniform rich blacks I like.
Also, I find that I really need more weight in my panels.
The story proceeds apace. More in a few days! 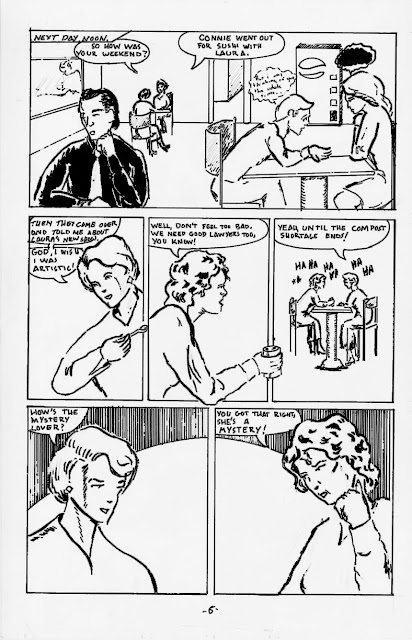 The good news: the next page of A Private Myth is done.
The tentative bad news: I don't know if I'll have time to scan today, what with grading and lecture prep.
Just to be safe, I'm posting some previously unposted pages from TranScending. I do want to keep posting every Sunday no matter what.
This is the pot-addled romantic/erotic fantasy our heroine goes on at the end of a VERY difficult day.
I will post the new page of APM either later today or within the next 48 hours. Have faith! 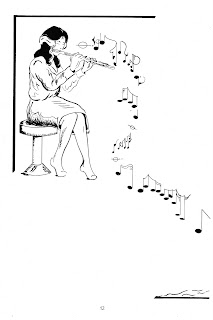 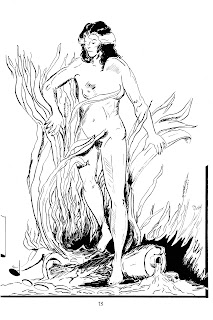 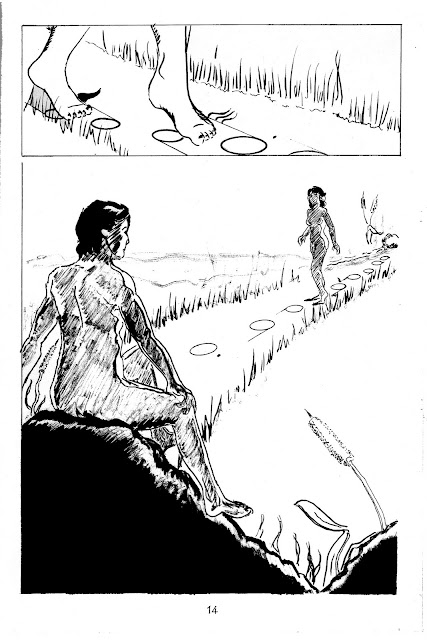 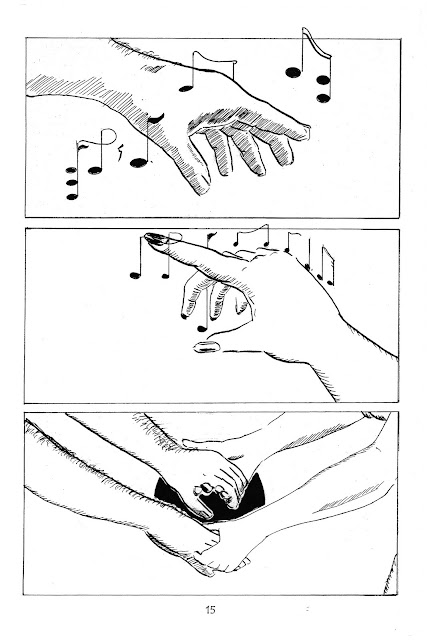 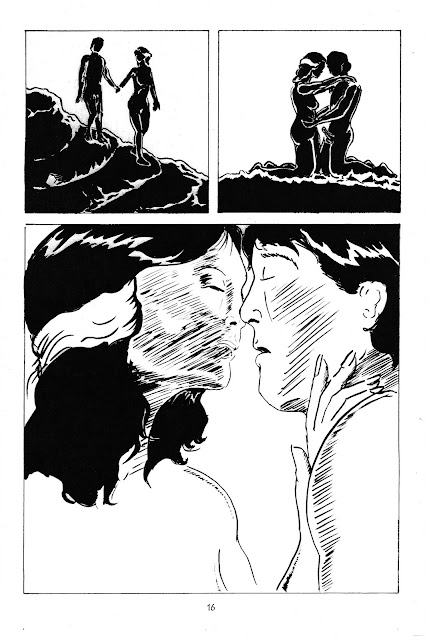 Note that pp. 12 and 13 are intended as a double page spread.
Also, the musical notes echo her mental travels, a device stolen from P. Craig Russell.
I was pretty happy with these pages in general, but the story lost its meaning as my perceptions changed over the years. I may come back to it if I can figure out something fresh to say. Most stories about trans people are about a very few things: self-discovery, transitioning, being outed, love lives, or suicides. Until I find something more interesting to say that hasn't been said before, this one is on the back burner.
on February 21, 2010 No comments: Links to this post

Charlie Beasley and the Eraserhead syndrome

Just taking a quick moment before getting ready for a Post Office run, an art opening and a birthday dinner.
Last night was the last time jazz musician and beloved local jazz scholar/teacher Charles Beasley will ever play in public, possibly at all.
The founder and leader of Beasley's Big Band, now in his early 80s, sat in for two numbers at the Wabasha Caves last night, then hung for one set and called it a night, leaving with one of his daughters and with all our love.
I've been going to see Beasley's Big Band on and off for 15 years now. Always a delight, like spending time with family and hearing some high-energy big band at the same time.
Now, his health an issue, Charlie wants to devote the rest of life to friends and family.
Thinking about Charlie stepping down reminded me of the film Eraserhead. You know, the offbeat freshman entry of David Lynch.
Eraserhead begins and ends with a man in a chair pulling a lever and silently screaming as sparks fly. In between these scenes, the story of a young man's life is told in surreal, disturbing and humorous imagery.
What some people, including me, think this film is about is simple. A man is killing himself by electrocution, and we are seeing his life flashing before his eyes, distorting by his frying brain cells.
So what Lynch is essentially saying in this movie is, "I did everything I was supposed to in life- a career, a love, a family- and it was all worthless."
A comment on what life is worth. According to Lynch in this film, not much. Might as well give up. Like the song in the film says, "in heaven, everything is fine." This implies that here on Earth, not so much so.
Mind, I still admire the film, but with this perspective in place, I can't find as much pleasure in it.
Charlie arrived at a different decision. I hope that when it gets really hard, we all find the strength to find something worthwhile in life.
Here's Charlie talking about his life, his love of music and the band. I have some other footage of them playing that needs to be digitized for download. Anybody else still have old VHS tapes to convert?

Ladies, Gentlemen and others, The Gentle Giant High School Band!

I was alerted to this by my friends on the Gentle Giant list. For those that don't recognize this, it's an unlikely medley of several GG pieces.
This took Silver in the Indiana Percussion Association/WGI 2006 competition.

The next page of A Private Myth is still on the drawing board, but finally ready to ink.
Really tight pencils and a good layout. Happy with it.
Just not ready to post yet.
Aargh.
Many of the delays are due to time spent prepping papers for presentation and publication, alliteration unintentional but kind of fun.
However, I do have new work to post.
Neil Gaiman announced the 9th Anniversary of his blog. I'm not going to bother posting a link since I link to his blog elsewhere on this site anyway.
However, Neil requested images of congratulations that incorporate the number nine.
Thanks to my camera (not much point in saying "digital" any more, is there? That's pretty much all there is now.) and Photoshop, I came up with and posted this image. 8 Gaiman books and me. That's 9. Also, the books form a nine. Pretty on the nose, but fun to do, and a nice diversion from a page that's taking way longer than it ought.
More soon.
on February 14, 2010 No comments: Links to this post

An hour early, but what the hey.
Usually this day doesn't bother me, but this year it's a bit of an irritant.
Valentine's Day. Grr. A paean to straight people, many of whom also chafe at its baggage and expectations.
Years ago, Jenny and I went to a Valentine's screening of CRUMB. It began with some great Betty Boop cartoons, then a wonderful set by the Penguin Cafe' Orchestra. During the intermission, the manager made a short announcement. "You may wonder why we're showing this film for Valentine's Day. Well, we think that most people's relationships are at least a little messed up, no matter how hard they try. And we thought that no matter how bad your personal relationships were, they had to be better than Crumb's, so we wanted to give you hope."
I can't quite hang with that level of cynicism about the whole thing, but my usual idealism about love and romance has been a bit tattered of late.
So I hope my ambiguity on this issue doesn't deter your enjoyment of the day. Please enjoy these images that reflect my current antipathy towards romance. 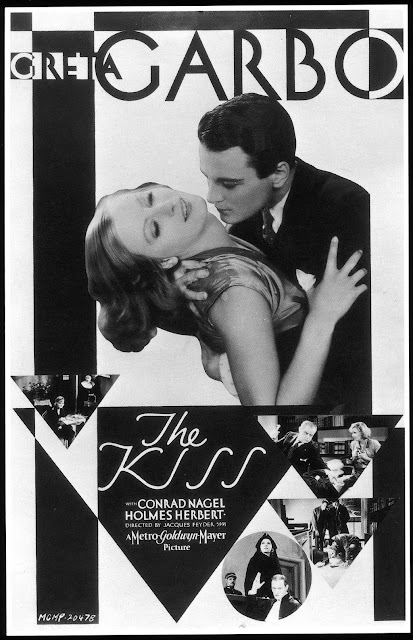 I love the Art Deco typography on that one! But I'll let the next two speak for themselves... 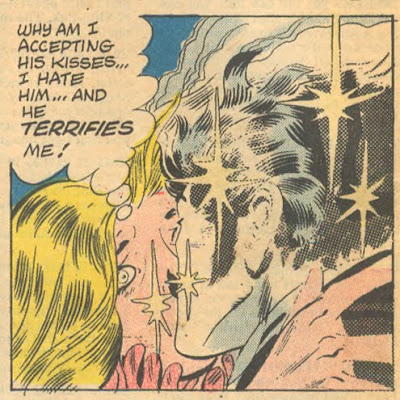 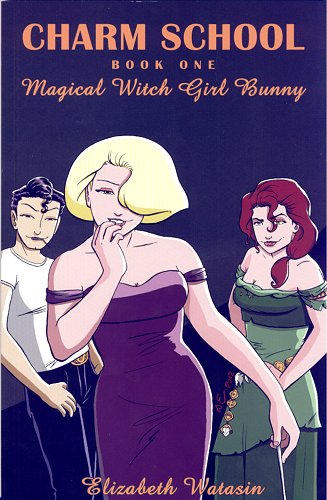 Charm School gives me hope.
This delightful comic from about 8 years ago tells of the romantic contest between a gorgeous butch vampire, a mortal and a witch.
And it's a book that openly acknowledges the lesbian relationships but treats them as a matter of course.
So refreshing.
Full of songs, spirit and passion, this book is just plain fun. I need to dig out my copies and get them to the binder, so the volume can hold a place of honor on my shelf, like it deserves!
Quite honestly, I had no idea what I was going to say when I started writing this. My love life has been mostly theoretical for the last 5 years. But even with all the frustrations relationships bring, I still want one.
I guess as messed up as romance can be, we still need it, and at its best, it's so amazingly joyous as to be worth the rest of the craziness.


There you have it. Hope springs eternal!
on February 13, 2010 No comments: Links to this post

A bit off schedule this week. The next page of A Private Myth is on the board, but I had some time issues. Also having issues coming up with an interesting layout, as it's a dialogue heavy page.
A rough week. I also didn't make Foot in the Door, but my commitment to it was flagging, so I suppose it's just as well.
Meanwhile, please enjoy these pages from the start-and-stop epic TranScending. 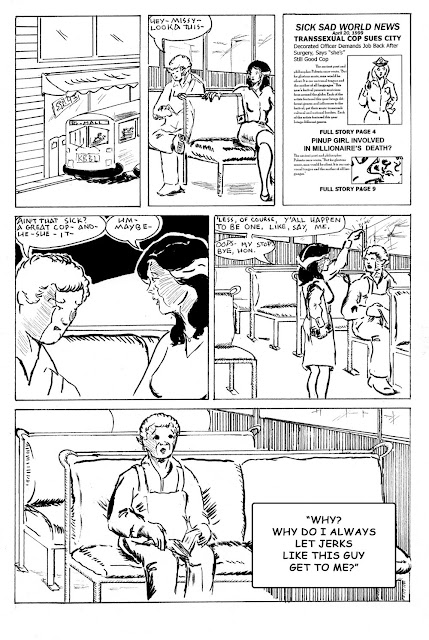 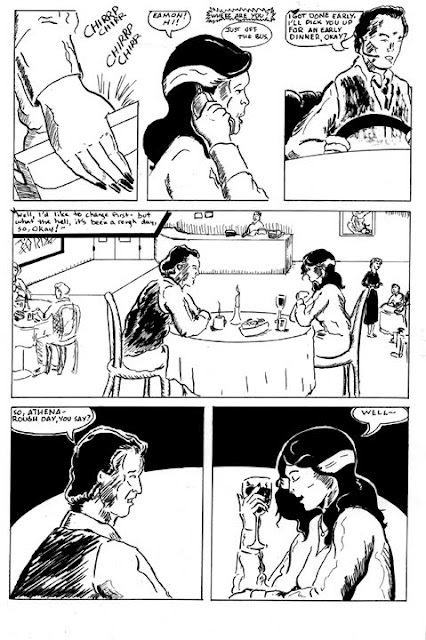 These pages of TranScending were done for the PRISM Guide a few years ago. They said no sex, and I went a bit too far in making them tame. Still, I rather like the last panel on p. 3, and the tabloid on p. 2 is an homage to both Daria and Omaha the Cat Dancer.
I have approximately 12 more pages of this done and scattered about. This is a carryover from my attempt at emulating Omaha. Originally the central character, Athena, was a skunk. That's how she appeared in the Tranny Towers strips from 1994-95.
Just for fun, here's an old Tranny Towers strip. This one appeared in GAY Comix #25.

Note the Gentle Giant quote in the last panel.
I should post the rest of these just to get them out there.
New page again next week, for sure, and thank you all for your patience!
on February 07, 2010 No comments: Links to this post

Okay, made some corrections, saved that "happy accident" (thanks for the fun comment, I get so few!) in Tier 2.
I'm planning on pushing the detail in the originals from here on out rather than fight with digital equipment to get what I want. I know what to do with Photoshop and all that, but it's much more direct to put it into the inks to start with.
It also feels more real.
I elected to not re-ink the borders in Photoshop and not to re-letter digitally this time. I'm happy with the outcome and hope it suits the final product. 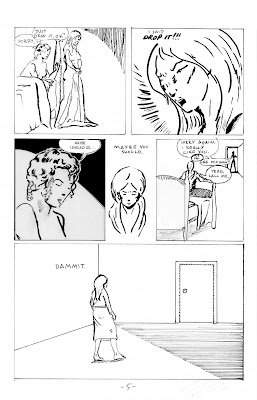