Hello my lovelies!
Back after some delay. I did this page a while ago, but am just now finding time to post.
Now that I am fully healed (I think) from my car crash of two years ago, and both jobs have a measure of equilibrium, I am bringing several projects back to the proverbial front burner.
Don't worry, I am still plugging away at Sharp Invitations. Hell or high water, I will get that done.
One of these neglected projects is a collected edition of Tranny Towers, Another of those projects I've nibbled at for a while. Well, here's another little taste.
I have an enduring love of paper dolls, especially in comics. I've waxed enthusiastic about this before, and did some for the Surrealist Cowgirls. To complete the Tranny Towers collection (which a couple folks asked about at May's Queers and Comics conference, I need several things, including paper dolls of all the principal characters.
Here's the first, of my favorite character Athena.

The wardrobe is a bit lighter than many such pages. Usually, there are three or four outfits. If there's time later, I'll do a second page of just outfits for her! The lingerie is nowhere near as sexy in my drawing as it is in the George Petty painting from which it's taken. But the other outfits are self-explanatory, I think.I love using wonderful clothes from popular culture as paper doll outfits!
Also, there's the inevitable political aspect of celebrating the bodies of trans people, even if they are cartoon characters and skunks. I've drawn her a bit more zaftig than in past work, as she's aged a bit (haven't we all?). That's the way she'll appear, more or less, in the concluding story that resolves all the principal characters' lives.
Equipment used is the same as on the last page, but a bit more brush work than usual on this one.
Next: more story
on July 08, 2019 No comments: Links to this post

New page has been done for a week or so. Finally have a minute to post.
Our heroine (me) has been seeing both Delia and Sara, while seeing Curt. One night: 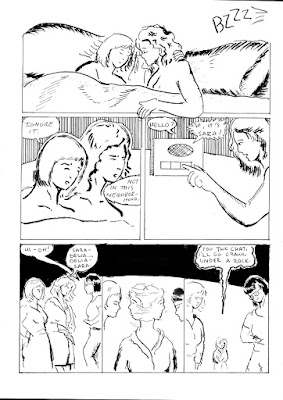 Yeah, I was busted, as we used to say. I really did feel that small! Not my shining hour. It's to my credit that both these women still talk to me and consider me a friend.
The Curt story is coming to a crucial point in a page or two.
The original draft of this story was 11 pages. We are near the halfway point of this part of the narrative, but the action picks up substantially very soon.
Technical notes: the top tier needs a caption to establish place and time, which I just now realized. The design device of the arc used to give weight to the second and third tiers works, but I would rather vary it a bit. I like the spinning head in the next to last panel a lot!
Materials are the usual:
Canson Bristol
Tech Markers No, 1, 3, 6 and 7
Lead holders with hard and soft leads
Magie Rub eraser
Dr. Martin's Walnut Black Ink
FW Acrylic White
No. 2 Elita Sable Brush
Synthetic brushes No. 4, 8 and 10
Tight Spot angled brush for corrections.
Next: either the next narrative page or a little treat.
on April 12, 2019 No comments: Links to this post

I have never had a happy relationship with sports. I was uncoordinated, socially awkward, and I got beat up regularly in gym class, to the point at which I saw the phrase "gym class" as an oxymoron.
The only sports at which gave me any degree of pleasure were the solitary sports, particularly swimming.
Despite this, I developed some very small skills at basketball and baseball.
In the 1980s, I also developed a fascination with the work of independent filmmaker John Sayles, whose film Eight Men Out dealt with baseball in a very different way than most plucky sports films. Sayles' work dealt with baseball's first, and possibly biggest, scandal, as did the MN Opera's newest production.
With this framing the event, I was intrigued to attend the newly commissioned work The Fix, staged by MN Opera. The work did not disappoint.
Warning: spoiler abound below.
Based on the 1919 World Series, which was thrown by the Chicago White Sox, The Fix concentrates on a few primary characters: "Shoeless Joe" Jackson, his wife Katie, his teammate "Chick" Gandil, and sports writer Ring Lardner.
The opera brings out multiple aspects of the story, not the least of which is owner Charles Comiskey's cheating his own players of earned bonuses. This is the catalyst that leads the players to consider throwing the game. Someone is being paid exorbitant sums for their work. Why aren't they?
I would have liked to see this aspect of the story played up more. It does come across, just not as strongly as I thought it might have.
Joe is cast as the most moral of the lot, the Chicago Black Sox, as the team came to be known after the scandal was made public. Once Joe agrees to taking the bribes, the fix is in. Pitcher Eddie Cicotte hitting the first batter with a pitch. This is the signal that cinches the deal. The eight players are throwing the World Series.
However, this sits badly with the team. Four games in, down three to one, Joe declares, "it's hard to play bad." Inspired by Joe, the Sox win the next two. It's only when Katie's life is threatened that the last game of the series is thrown.
This series was also unusual, in that it was a nine game series, not the usual seven.
The following year, the Sox make it to the Series again. Katie has been Joe's guiding light, and at her urging, Joe, not the sharpest tack in the drawer, goes to attorney Alfred Austrian and confesses, after signing a waiver of immunity.
A trial ensues.
A young fan, desperate to continue admiring his hero, was the first to say the now classic phrase, "say it ain't so, Joe!"
Despite a not guilty verdict, newly appointed baseball commissioner Mountain Landis rules the involved players barred from professional baseball for life.
This effectively ends not only the players' careers, but writer Ring Lardner's as well. Larnder, now an alcoholic and stricken with tuberculosis, happens on a member of the Eight, who tells him of a chance meeting with Joe, now a dry goods store clerk. Joe is hollow and drab, lacking the fire of the one thing besides his marriage that gave his life purpose- playing ball.
Like all MN Opera productions, this is brilliantly staged. The stands, populated by static marionettes, are the backdrop for the whole opera. The team name, with the word "white" replaced by the "black" at a pivotal moment, is stark, as are the shots of the eight offending players.
Mobile set pieces create locker rooms, speakeasies, interrogation rooms, courtrooms and storefronts with fluid ease. 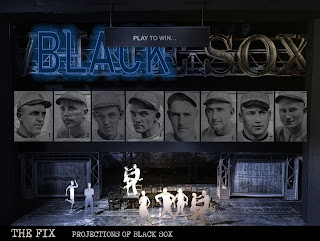 Urgency and inevitability dominate the production. The questions of how one does right after being wronged, how one does right after doing wrong, and how one lives with the consequences of their actions are presented starkly. The end offers a redeeming moment, the shining possibility of once more playing the game for the sheer joy of it.
Joshua Dennis does a powerful and sensitive turn as Shoeless Joe, while Jasmine Habersham gives dignity and conviction the role of his wife Katie. Wei Wu also stands out as Joe's buddy "Chick". MN Opera resident artist Kelly Margraf is both aggressive and vulnerable as Ring Lardner. Artist alum Christian Zaremba brings bombast to the role of Mountain Landis, reminding me alternately of Christopher Walken and the Daredevil villain The Owl in his bearing.
The work makes effective, but not cliched, use of its historical framework. Nuances of Prohibition and flappers enhance the atmosphere.
I went into this one with some apprehension. Not being much on sports (see above), I had difficulty imagining the emotional possibilities and opportunities this story could present. I didn't think it would engage me.
The Fix moves well and engages on many levels. Setting, libretto, score and performance are all strong. The opera runs through March 24. You are eagerly encouraged to attend! 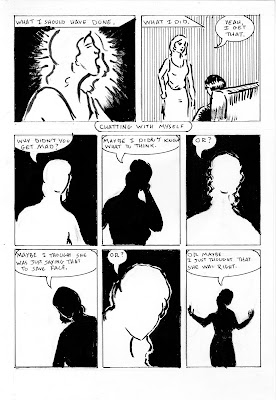 So much to unpack here.
This was one of those moments that we live without thinking about it, and later realize its impact. At this point (early 1990s) there was an even wider division between much of the lesbian community and what served as the trans community than there is now. While the term TERF was not in wide use, the phenomenon was hardly new, dating back in the public consciousness to Janice Raymond's 1979 hate-filled screed The Transsexual Empire. I made myself read that vile thing. I no longer have my copy.
Also, as Sara said this, it touched on my confusion and internalized shame. I had been out about 6 years. I had "the surgery" about a year prior to this. I was in my first serious relationship after becoming myself and I felt like I was supposed to have all the answers, and I knew that I was blowing it. Then the woman I'm interested in tells me her qualms. Really, could I blame her?
This calls for internal dialogue!
To that end, I stole a device from Harvey Pekar. There's an American Splendor story that consists entirely of Harvey talking to himself about a recent failed relationship. In the final exchange, he reflects on the old adage that failure allows for the possibility of growth. Harvey says he's tired of being alone and concludes, "right now, I'd trade growth for happiness." That really stuck with me. I decided that the narrative device he used there was perfect for this page. The silhouette is a clean visual device, but much trickier than one thinks! By reversing the black and white, I was able to get a sense of internal dialogue. I will use this again at key moments in this book, but I don't want to overuse it.
The layout of the first panel also frustrated me. I wanted a primal scream but nothing too big, if that makes any sense. I finally cribbed a pose from the Summertime number in Ralph Bakshi's American Pop, which I still think is the best thing he ever did (with the possible exception of Christmas in Tattertown).
Nothing spectacular about the second panel. It's there to convey a passive attitude, and it does that.
It took three tries to get this page the way I wanted it. It was frustrating, and it took much longer than it should have, but it was ultimately worth it.
Materials used on this page:
Canson 2 ply recycled Bristol board
Lead holder
no. 4 solid lead
Magic Rub eraser
Straightedge
crow quill
Princeton Synthetic Brushes No. 2, 4 and 8
FW Artist's White
tight spot correction brush
Our story takes an embarrassing comedic turn next time.
Next post: Page 19, where things catch up with our heroine a bit.
on January 28, 2019 No comments: Links to this post