What is this Kickstarter monster and will it ravage the village?

According to this article, the newest publisher of independent comics is everybody, through a central clearing house for funding.

Kickstarter is a great idea.
I've known a few people who have successfully run one- Greg Ruth, Ursula Murray Husted, Zak Sally, Neil Gaiman (a bit of a conceit on my part- we've met a half dozen times, had a few chats, so I can say I know Neil, but I'm skeptical he'd remember me).
I've been batting the idea around for a while now, trying to decide just what to fund. I think my best bet's a comic book, though there are other possibilities- an illustrated version of my screenplay? A series of handbound books? An "absolute edition" of my Mother's paintings, which I've been collecting in book form for the past 6 years?
Whatever my decision, it will be a response to the phenomenon of crowfunding, or funding by a crowd.
Other venues offer similar: IndieGoGo began as a way to fund music projects, but has branched into other enterprises, including comics. Their business model differs slightly from Kickstarter. They keep 4% (as opposed to KS's 5%), and allow the solicitor to offer premiums or tax writeoffs, which strikes me as a bit dicey.
Then there's Quirky, which is devoted to funding inventions.
The good: more projects are getting out there. You don't need an external publisher or startup funding to print a comic. This is a variation on Scott McCloud's idea of microfunding comics, put forth in his Reinventing Comics.
The downside of the good: we all need editors at times, especially when we're honing our craft AND when we've reached a pinnacle of success. As pointed out in a recent discussion with screenwriter Tom Pope, the risk at the high end is that you start to believe your own PR, and nobody wants to say no to you. So while the self-publishing model is tempting and useful, it should not be the only thing you have going.
More good: the funding is improving. About half a year ago, roughly 40% of Kickstarter projects were fully funded (it's all or nothing funding on these sites, remember). Today the figure is slightly over 50%.
The skeptical response to that good: more small projects are being funded, which means if you have a BIG IDEA, your odds are lower, unless you have a name attached. See the aforementioned Gaiman-related project, an animated feature based on one of his stories.
This begs a larger point. These sites are open to everyone. That's fine, but it chafes me a bit when established creators put their projects on them. Oh, they're entitled, and I know that recognition and some success does not give one carte blanche. But I'd like to see something devoted solely to up-and-coming creators. I don't know what criteria could be used for that, or how that would be vetted, but I could see some utility in having a work totally stand on its own merits. Hm- possibly a crowfunding site that gives funds to projects whose creators are not named?
On the other hand, if this option existed in the 1970s, perhaps Orson Welles would not have to shill in commercials to fund his films.

After all, Jess Franco is using crowfunding to finance his next film.
Another problem in relation to this funding is the mandate for offering premiums at different levels. That can cause as many problems as it solves if the premiums are not up to snuff. Also, the creator is responsible for the creation and strategies of ancillary promotions before the project even begins.
I hope my skepticism on this process is unfounded. I'd like crowfunding to be a benefit to most. I don't think it's practical that it benefits all. Some projects need to go unfunded- this is also a form of editing, albeit a populist one.
But whatever my project turns out to be, you can bet that it's going to be great and deserving of funding!
on June 10, 2011 No comments:

Okay, I know I said next day. I've been waiting for some photos to be emailed by friends.
Enough with the waiting. Here's the rest of SpringCon.

Here's Terry Beatty, longtime comics pro, on-and-off MCAD teacher, rockabilly maven, Karaoke Ninja, and generally cool guy.
The book he's holding, Batman and Robin, is a custom bind belonging to my friend James Friel. James sent me a batch for books for signing and sketching, and Terry was glad to accommodate!
We're losing Terry soon. His wife got a great job in Kansas City, MO, so he's off to an even more mid- middle America.
Terry just completed work on the next GN in the Road to Perdition series, written by his old Ms. Tree partner, Max Alan Collins! He's also been doing box cover art for monster model kits, and taking on new commissions. His blog, Scary Terry's World, is linked to your left.

Also on board for this convention: former students from my Comic Book History course, Asby Utting and Andrew Herbst!
Ashby graduated a year or so ago, and Andrew completed his devoirs this January. Andrew gave me a copy of their joint effort, GROTTO, last year, and I enjoyed it immensely. Very professional, energetic work. The "for students" disclaimer does not apply. This work is professional by any standard.You can see it here.
Ashby is planning an on-again, off-again trip to Korea to study manhwa.  He plans to take his toddler son along with him. Now that's bringing a kid up right!

Another former student showing at the Con: Toe Vue!
Toe's paintings are remarkably powerful. I suspect he was a little under-appreciated at this Con, but I was very happy to see him there. The work at his blog, Create Chaos, shows his range and his influences.
I see elements of street art, Paul Pope, Ryan Kelly (well, you can't really talk about Paul Pope without talking about Ryan Kelly, can you?), Boticelli and Jack Kirby in Toe's work. An eclectic mix with a deliberate, singular style that wouldn't work for anyone else, I done't think, but for Toe, it's very effective.
Finances have stopped me from getting his comic GHETTORISTIC, but don't let my problems be yours. Check out the link and spend a fin on a good comic!
Other former MCAD students presenting at this year's con included Evan Palmer, Anna Bongiovanni, Jesse Haller, and Will Schar. Sorry I didn't get photos of you guys, and I hope I didn't leave anyone out!
Very happy to chat briefly with Seamus Burke, whose first collection of Oh Goodie! is now available in Dead Tree, or as we used to call it, TPB format. 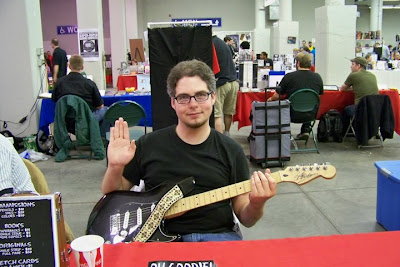 Very excited to see this book out, as Yours Truly wrote the Foreword!
Seamus' work has evolved considerably.  He works in the model of Doonesbury, using scathing wit and somewhat static images to advance his narratives. With the evolution of the band in his strip, which updates 5 times a week over at his blog, he's broken out of that pattern.
The band in the strip is called the Filthy F@#$ing Fairies!
I didn't talk to Seamus for very long this time around. Usually I get him to fork over his guitar so I can tear off a number, but not today.
Another personal highlight was getting a wedding invitation from the vibrant and scary talented Ursula Murray Husted and her intended, Bryan Bornmuller.
Ursula and Bryan are in contention with Trina and Steve for the title of Cutest Couple in Comics.
You be the judge.
More book signings:
Jose Luis Garcia Lopez

Len Strazewski, who was moved to tears that someone would bind his work!

Peter Krause, who was so astounded by the SHAZAM! collections that he volunteered to do a sketch, and it was a beauty!

Following the Con, a bunch of us went out for Girls' Comics Dinner at the always enjoyable Jasmine 27. In attendance, Frenchy Lunning, Barb Guttman (who is currently assisting Peter Gross on art for The Unwritten), Barb Schultz, Jesse Haller (who was an honorary girl for the occasion), Rana Rauechle, Trina, Steve Leialoha (can't really have Trina without Steve!), myself, and Roberta Gregory. I haven't mentioned Roberta's presence till now. I still get a little tongue-tied around her after meeting her twice and spending several hours accepting that she's just Regular Folks. Her work set the bar for women's comics for years, and her honesty and craft remain benchmarks. She's currently working full time for the Seattle Opera and Children's Theater, unless memory fails me.
At the end of every con, I think I'll pull together a body of creative work for the next one and get a table.
perhaps, perhaps not.
I like the idea of having a body of work to offer, but I have no problem with being a fan. If that remains what MN Springcon is about for me, I can live with that.
on June 10, 2011 No comments: