This coming Sunday is National Talk Like A Pirate Day!
It draws many things to me beleaguered and rum-addled mind.
We'll let my old captain, Micheal Nesmith, interrupt now and again.

Arr. Now, then.
Since Pirates of the Carribean, there's been a revived interest in our bilge-soaked seafarers. Mr. Depp's over-the-top portrayal was a delight in that it made several things about pirates clear.
They're unclean.
They're dishonest with others, and not always so honest with themselves.
They're violent and greedy.
Despite that, they're really fun!

Yes. Quite right, then.
Pirates have been fixtures in comics forever. The origins of The Phantom and Tarzan are both steeped in pirate lore. Tarzan's parents were cast away from their burned ship by pirates, while pirates killed Kit Walker's parents in the 1600s, resulting in the Phantom legacy.

It's also worth mentioning that

Ahem. As we were saying.
It's also worth mentioning that many more contemporary superheroes have walked the planks under the skull and crossbones!
Benjamin J. Grimm, the Thing of Fantastic Four fame, was, in reality, Blackbeard.

One of the smartest superhero stories, James Robinson's Starman, uses pirates as a recurring theme, first as an adventure with Starman's late brother, then as a rescued damned pirate who saves Starman's bacon.

Detective Comics Annual No. 7 featured an Elseworlds story of a pirate Batman. The story, titled Leatherwing, is part of a series of unrelated stories, set outside standard DC continuity. While they often end with the central characters assuming the same roles they do in the "canon" continuities, these outings do give the creators a chance to stretch a bit.

There are also comics that are specifically about pirates, ranging from


(stop that!) er, ranging from this early Classics Illustrated, that adapts the Yul Brynner/Charlton Heston odd little quasi-historical epic The Buccaneer (one of my favorite childhood movies)

to Will Eisner's pre-Spirit strip Hawks of the Sea, represented here in its Canadian version,

to the more recent El Cadazor, from the late publisher CrossGen, whose smart, beautiful comics were hindered by an overly ambitious business plan and the vagaries of the economy.

This book, by the usually snarky/macho and slightly misogynist (but not nearly as bad as Beau Smith in that respect) Chuck Dixon, picks up on the Disney Pirates notion of a woman as captain. Not unheard of in the world of real pirates, but rather uncommon.

Another fixture of the pirate narrative: the abandonment of identity. In all these stories, there's an aspect of the character being reborn as another, a burial at sea of the land persona, if you will. This is often accompanied by a moral shift.

Following the astounding popularity of Disney's Pirates of the Carribean films, the theme began to recur in comics, including this delightful romp from Ted Naifeh, illustrator of the transgender tone poem How Loathsome, written by Tristan Crane. 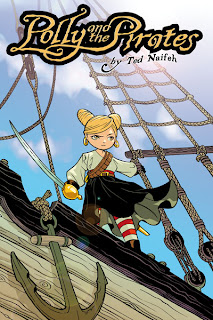 Along the same lines, there's the bright (if derivative of Elfquest) comic based on the short-lived series Pirates of Dark Water. In addition to a page of the narrative, here's the cover of the last issue, with art by the delightful and elegant Charles Vess!

And thanks to the sadly demised Disney Adventures Digest, we have comics featuring Jack Sparrow and Company, illustrated by Brett Blevins, who also did the new Scarecrow of Romney Marsh comics for the same publication!
The first story was Revenge of the Pirates, from the August 2003 issue. 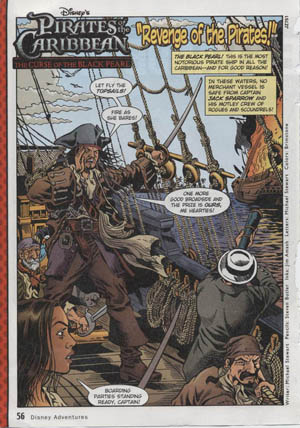 The final tale was The Accidental Pirate, from the Disney Super Special, Sept. 2009. 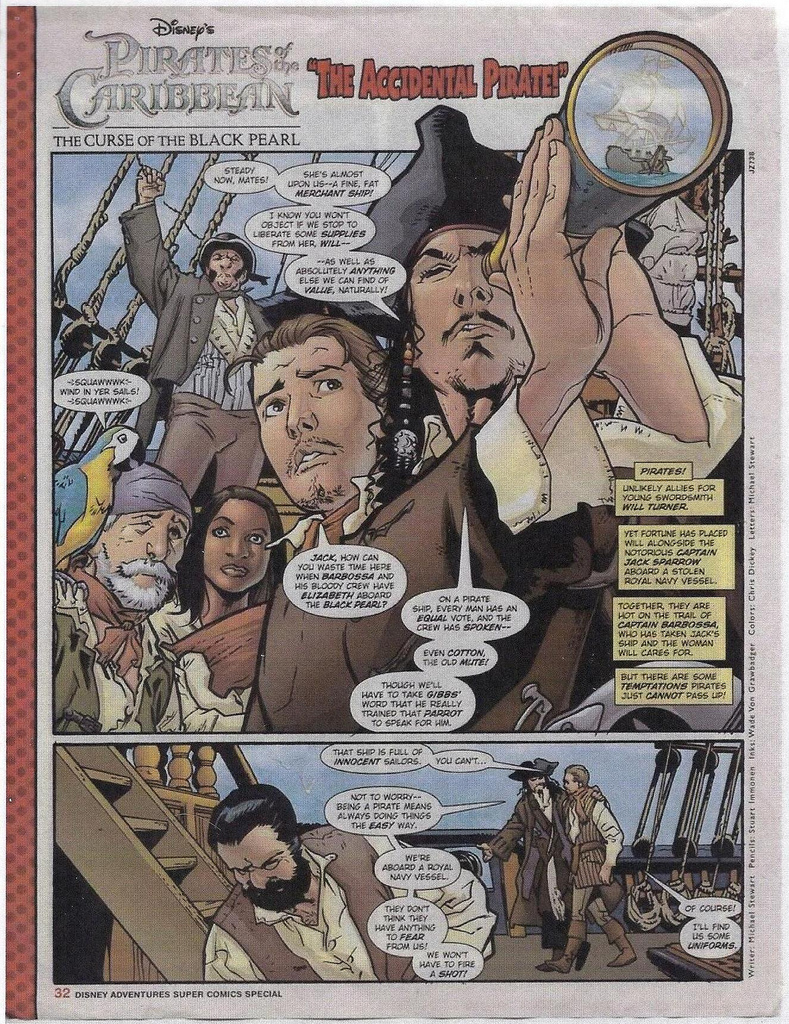 Approximately midway through the run, this tale appeared, introducing the usually land-bound pirate The Scarecrow of Romney Marsh,  who was featured in a dozen or so stories of his own throughout the run of the magazine. 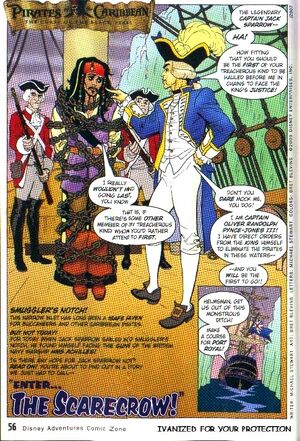 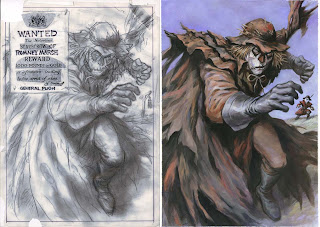 And the classics.
This post-trend EC title featured some remarkable art and some innocuous stories- of necessity, as demanded by the then-powerful Comics Code.

And let us not forget the use of pirates as metaphor in the meta-comic Tales of the Black Freighter, contained in The Watchmen.

I'll be having some grisly metaphor, if you will, Captain! The true nature of pirates is much closer to the surface here, and is taken to extremes by the labyrinthine S. Clay Wilson in his classic, Captain Pissgums and His Pervert Pirates! 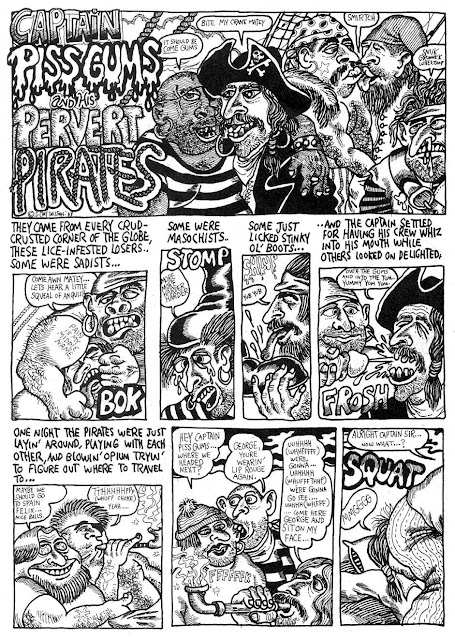 Despite Disney's attempts to turn them into charming rogues, pirates remain lethal, often amoral figures bound by their own code. Their stories are a sort of seafaring noir, wrapped in desperation and urgency as they sail to treasure they can never spend.
This Gentle Giant song sums up the inevitable end of most pirates.

The world of pirates is colorful, adventurous and seductive. It's also nihilist, defeating and doomed. The core conflict is Man Against Sea, and Sea always wins. 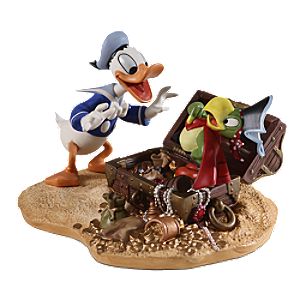 Ah, Pirates do love their treasures!